Fig and Pistachio Stuffing for Thanksgiving Stuffing that doesn’t have to weigh you down.

Think of this as Thanksgiving stuffing-lite.

Oh sure, it still has half a stick of butter in it.

But there’s no sausage in it. Nor any milk, cream or eggs. It gets moistened with chicken broth instead.

It also gets crunch from a profusion of pistachio nuts. And it gets a grown-up touch with dried figs that have been macerated in sweet white wine overnight. But don’t worry, they don’t come out tasting overly boozy. The alcohol tempers the fruit’s sweetness and adds a rounded depth. If you don’t have the Mucscat or Essensia called for in the recipe, you can improvise. I actually ended up using Canadian icewine I happened to have on hand.

The recipe is from one of my favorite cookbook writers, Molly Stevens. It first appeared in the February 2007 issue of Bon Appetit.

Thanksgiving is all about over abundance and over eating. But if you’re looking for a stuffing, in which you can enjoy seconds without feeling weighed down, this one’s for you.

1/2 cup sweet white wine (such as Muscat or Essensia)

Preheat oven to 350 degrees. Arrange bread cubes in single layer on rimmed baking sheet and place in oven until dry, about 15 minutes. Cool.

From Molly Stevens as published in Bon Appetit, February 2007 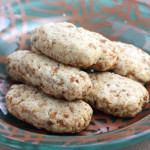 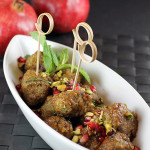 And Another: Pistachio and Pomegranate Meatballs 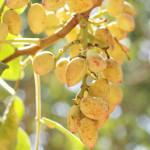 Coming Friday: A Trip To The Pistachio Harvest