Oh yah, this is how I like to celebrate.

If any food has celebration written all over it, it’s caviar, isn’t it?

First, it’s the anticipation that comes with the opening of the tiny jar or tin. Second, the delicate handling of it with a mother of pearl spoon so as not to impart any unwanted metallic taste. Third, the arranging of the accoutrements of minced onion, hard-boiled egg and sour cream on teeny, pillowy pancakes. And fourth — well, it’s the price. Let’s face it, if caviar cost the same as popcorn, we’d be eating it all the time. Instead, it’s a splurge, leaving it reserved for only the most special of occasions.

With Christmas and New Year’s Eve coming up, now’s the time to indulge if you can. I did just that when I a chance to try a sample 2-ounce jar of French Sturgeon Caviar from Southern California’s Anderson Seafoods.

For more than 35 years, the company has cultivated close relationships with fishermen and fleets all over the world, in order to source premium seafood that’s delivered right to your door. Find more info on the company on its Pinterest page and on Twitter @AndersonSeafood.

French Sturgeon caviar is a more sustainable alternative to that from the Caspian Sea, where wild sturgeon are on the brink of extinction. In contrast, the French caviar is from farm-raised sturgeon. 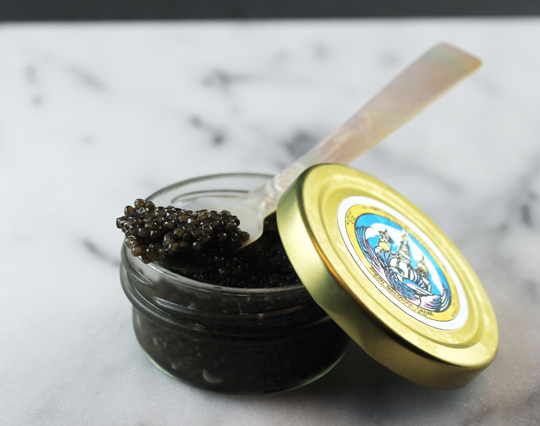 Spoon up some French caviar.

The tiny black eggs pop softly on the tongue with a mild brininess.

Since I don’t often have caviar in my house, I went all out — I made a batch of fluffy potato blinis using a recipe from Chef Edward Higgins of Bix restaurant in San Francisco that’s featured in my cookbook, “San Francisco Chef’s Table” (Lyons Press).

I dolloped creme fraiche on top of each, then spooned on the caviar before garnishing with the tiniest frond of dill.

I devoured one immediately. Then, another. And another. With a glass of sparkling wine, of course.

After all, the holidays call for celebrating with abandon when you can.

CONTEST: One lucky Food Gal reader will win a $300 gift card to Anderson Seafoods. You can use it to purchase caviar or a variety of fresh seafood. Entries, limited to those in the continental United States, will be accepted through midnight PST Dec. 20. Winner will be announced Dec. 22.

You’ve heard me swoon over caviar already. Tell me what food or ingredient most makes you want to celebrate — and why. Best answer wins the prize.

WINNER OF LAST WEEK’S CONTEST: In the previous Food Gal contest, I asked you to tell me about a splurge you made that was well worth the price. The winner will receive a free Snake River Farms American Kobe Gold Grade Ribeye Roast (a value of nearly $400). 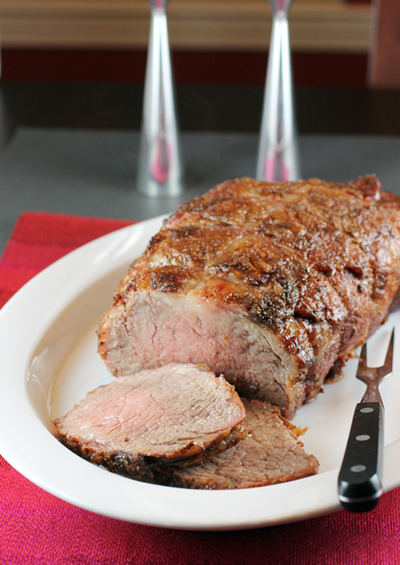 Blake Gray, who wrote, “I was backpacking in Europe on a very limited budget and I wanted to see the Isle of Skye. On the boat there, I met a fellow American who planned to rent a car and invited me to come along. We spent the day exploring the island; different vistas around every curve. The people were great. A farmer handed us a newborn lamb, and I held it close to my chest; I could feel it trembling as it baaahed. We had so much fun that we didn’t stop for lunch, as there was only one main town and we went on a loop around the island, returning at night. Only one pub was open when we got back, and they had only one bag of crisps and one chocolate bar, which we split. I wished Marc well, but I hadn’t enough money for the only hotel in town, so I got out my sleeping bag and crouched in a doorway. It’s Scotland; a beautiful starry night turned to a downpour sometime in the middle of the night, and I crouched further back, wet, hungry and miserable. In the morning I could see that the luxury hotel had a buffet breakfast for 25 pounds — very expensive, about 5 times what I was usually paying per night to stay in youth hostels. The boat back to the mainland wasn’t for several hours, and if I waited long enough I could get bread and cheese from a store, but I was shivering as I watched them set up the buffet through the window, and it looked terrific. I went for it: I folded up my sleeping bag and went in, my clothes rather wrinkled and grubby from a full day of tramping AND a night sleeping outside. I had a massive plate of smoked salmon, quiche, charcuterie, salads, fruit, brown bread, and I set to it. A man in uniform came over to ask if there was anything I needed. My mouth full of salmon, I said, ‘Does this buffet come with kippers?’ I’d never had kippers. He said, ‘You can have kippers.’ They brought me a plate of two smoked kippers, which I devoured with fried eggs. Then I had another massive plate of fruit, pastries, more smoked salmon, potatoes. Finally my consumption slowed and stopped, and I felt embarrassed. I walked up to the register to pay, feeling how disheveled I looked. The same uniformed man said, ‘Did you get enough to eat?’ I thought he was mocking but I said, ‘Yes, thank you.’ He smiled, and so did two women behind him. ‘Oh good. We saw you sleeping outside when we came in this morning and we were worried about you.’ They gave me some brown bread and smoked salmon for the boat. That was perhaps the best 25 pounds I ever spent. I forgot to say WHY that was the best 25 pounds I ever spent. It wasn’t just the delicious food when I was extremely hungry, or the warm, dry room when I was wet and cold. It was also the human kindness I felt that still sustains me.”