Pigging Out at Cockscomb in San Francisco 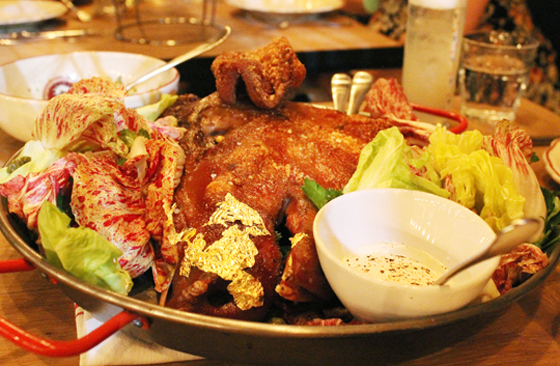 If ever a restaurant embodied its owner’s personality, it is Chris Cosentino’s new Cockscomb in San Francisco’s South of Market neighborhood.

It’s dark and it’s loud. Picture a concrete bunker hidden away with taxidermy on the walls. There’s a ceramic pig’s head you might recognize from Cosentino’s previous restaurant Incanto, as well as a huge stuffed buffalo head (a gift from a couple of patrons). Shelves around the horned beast’s head display Cosentino’s first bike helmet and old toys. The toilet paper rolls in the bathrooms are even made from spare bike parts.

As for the menu? A lot of it is rich, meaty and rustic — the delicious stuff you picture chefs devouring after a long night, especially male ones. Even so, a female colleague and I (she treated me), dug in and were rewarded with a meal that delighted and definitely made us feel like one of the boys. 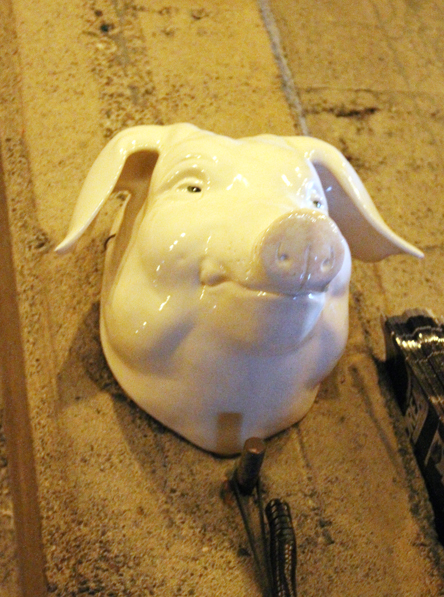 Another kind of pig’s head on the wall. 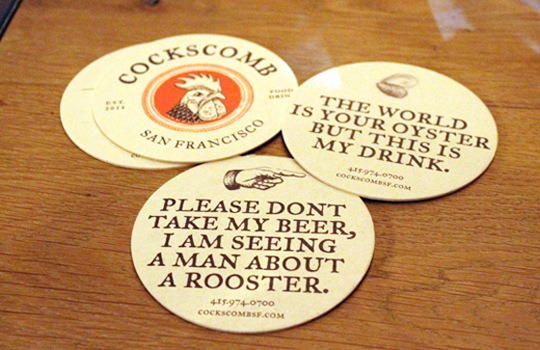 Why a restaurant named for that ruffle appendage on a rooster’s head? Cosentino says it’s because it harkens to his initials, “C.C.” and because “The rooster runs the farm. Its cockscomb is a commanding piece. The larger it is, the more attention that rooster gets.”

Certainly it takes cojones to serve a half pig’s head on a platter — gilded with gold leaf on its snout and accompanied with “brain-aise,” no less. Yes, pig brain mixed with aioli. But it has certainly paid off — in upwards of 12 orders a night and an endless stream of social media buzz.

So, of course, you know we had to order it. Just had to. 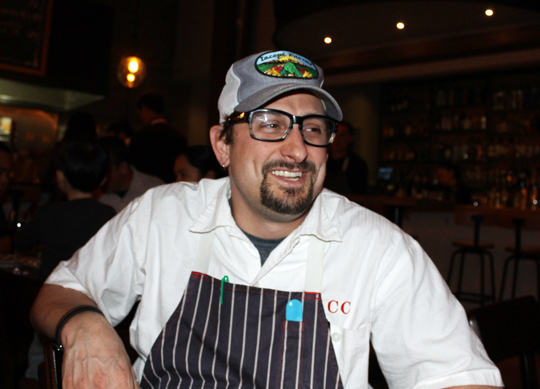 But first, there were cocktails. “Chef’s Gin Jams” ($11) is a gin and tonic with house-made jam stirred in. That night it was mandarin, giving the old classic a lovely hit of orange. The chef’s version of a gin and tonic.

Because we knew we were in for a meal in and of itself with the pig’s head, we contented ourselves with just two appetizers beforehand: the crudo of the day ($15), which that evening was a pile of smoked Coho garnished with cucumbers, capers and onions and creme fraiche. It was meant to taste like an everything bagel, and it sure did. Next, we shared a seasonal bruschetta because who can resist grilled bread stacked high with crab, lardo and uni butter? It was a sweet, briny topper with the lardo tying it all together with a slick of porky richness. 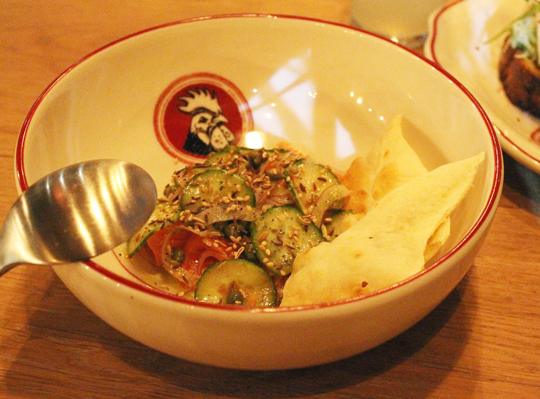 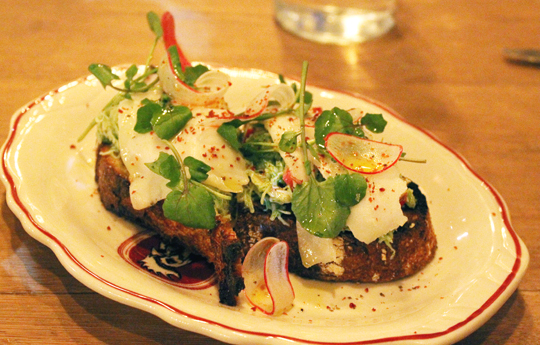 Grilled bread with so many good things on it.

Then, it was on to the main attraction. The Berkshire pig’s head takes 40 minutes and costs $65. You can’t miss it when it’s carried out to the table. And heads will turn — just not the one on the platter..

The ears are fried — but of course. The skin on the head is like chicharron armor — thick and so crisp you practically need to use your fingers to really tear into it. A salsa verde comes alongside to offer a hit of acidity. But it’s a rich one — as it’s made with the pork drippings. Chicory leaves add a fresh hit of crunch and bitterness. And the meat? It’s as tender and fatty as pork confit. A little goes a long way. We barely made a dent into it, before waving the white flag. I took the rest home to my husband, Meat Boy, who tore into it the minute I walked in the door. Still, we did have room to share a dessert: bay leaf panna cotta, a favorite I’d enjoyed a few times at Incanto. At Cockscomb, though, it was reinvented with alternating layers of mulled red wine gelee, giving it a more festive look. The panna cotta was the perfect jiggly consistency, and the gelee added fruitiness without an abundance of sweetness. It was garnished with a butter cookie in the shape of a rooster.

The cookie and the pig’s head encapsulate what Cockscomb is all about — dishes to sink your teeth and fingers into from a chef who just wants to have some fun. 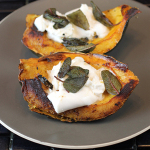 A Recipe from Chris Cosentino to Try: Acorn Squash, Stracciatella and Sage 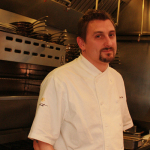 And: Take Five with Chris Cosentino