Who would have ever imagined kiwi and ricotta would make such a magical dish?

How do you follow-up a smash-hit restaurant that proved a game-changer in the dining world?

If you’re Chef-Owners Stuart Brioza and Nicole Krasinski of the red-hot, James Beard Award-winning State Bird Provisions in San Francisco, you do it with The Progress, which opened next door in December.

The Progress was originally going to be the couple’s first restaurant. But when they realized the extensive renovations the former movie house and century-old building would require, they wisely decided to open the smaller State Bird Provisions first in 2012.

That restaurant brought to bear the age-old concept of dim sum-style service to an eclectic array of global small plates — a concept now copied by others on the heels of State Bird’s success. An overhead view from the mezzanine. The open kitchen at the back of The Progress.

Whereas State Bird grabs hold of your attention by parading the majority of its dishes out into the dining room on carts or trays for you to see before you choose what to eat, The Progress is wrapped in a little more mystery and requires a peaceful consensus among your table mates.

When you sit down, you are handed the menu, as well as pencils. That’s because the dishes are served family-style, and your party has to agree on which they will be. Check off the six dishes (at $65 per person) you want, and hand the menu back to your server. You can add an extra dish — such as dessert — for an additional $10 per person.

The three of us — we paid our tab at the end of the meal — sat on the mezzanine level of the soaring, narrow restaurant with its striking shiny, curved ceiling. Texture is everywhere in this restaurant — from the exposed lath walls to the steel columns to the bronze, beehive cell-like floors.

Do take time to check out the bathrooms, too, which are painted with 250 pounds of glitter. It’s like being in your own private disco. 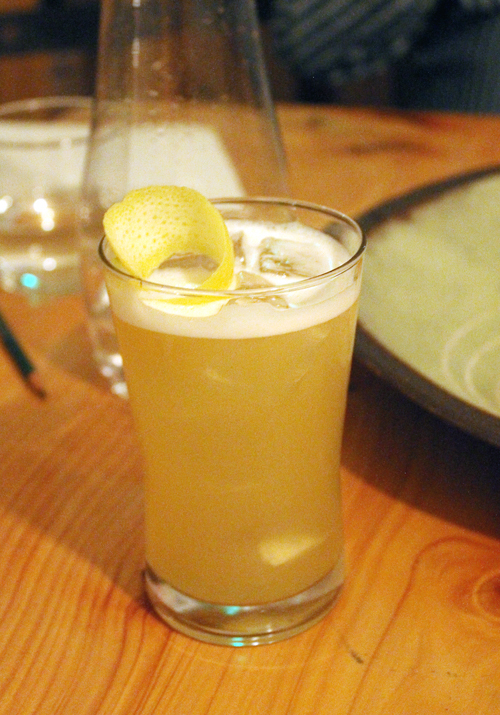 Another great beginning are the cocktails. The Sunny Jim ($11) would make even the darkest night a little brighter with its blend of gin, lemon, vanilla, pineapple, soda and fragrant kaffir lime.

The menu’s descriptions of the dishes are minimalist. So much so, that you might easily bypass something extraordinary just because the short descriptor didn’t grab you. That’s how we felt about the “local kiwi with super-fresh ricotta, almonds & pickled sunchokes.” We all agreed it wasn’t something we would have raced to get just from seeing it on the menu. But a recent review by the Chronicle restaurant reviewer Michael Bauer raved about that dish, so we had to try it.

It was amazing — voluptuous house-made ricotta tasting of sweet milk is a lovely foil for tropical kiwi. Fried crisp bits of rosemary and tart-nutty sunchokes make sure this doesn’t taste like breakfast.

“Shaved romanesco-herbs with pig fries” is a tangle of crunchy greens and romanesco cauliflower showered with fried strands of crisp pig’s ears. If all salads were like this, more Americans would eat them. You’ll end up fighting for the last fried shards of pig’s ears. A comforting plate of squash wedges.

“Black butter butternut squash with caramelized onion and Swiss chard” brought wedges of roasted squash, their sweetness complemented with a lick of umami thanks to the black butter.

“Polpette of rabbit and pork with blood orange and castelvetranos” were thick, juicy slices of sausage enlivened by citrus that we couldn’t get enough of. A different take on roti.

“Pecorino roti with black truffle buttermilk” was a much richer version than what you might be used to from Thai or Singaporean restaurants. The golden roti had a crisper texture and a buttery flavor rather than the traditional lighter, multi-layered version. The “Treasure Chest.” Wait for it, wait for it… A final flourish — and now, it’s ready to enjoy.

“Treasure Chest” is Brioza’s multi-cultural take on war won ton soup — without the won tons — our server explained. A deep bowl is brought to the table, containing little treasures: pillowy fish quenelles, sausage slices with an unexpected vinegar tang from being fermented, pickled cabbage leaves, and chewy, sweet pumpkin mochi balls. The server arrives to pour a hot pork broth over it all.

It’s like nothing you’ve ever had before. Deeply porky like a good ramen broth, but caressing contents that are totally surprising, almost whimsical in nature. But when put together, it all somehow works.

For dessert, we honed in on the pineapple confit tart with guava-ginger cream and pink peppercorns. Soft, caramelized pineapple is always hard to resist, especially when snuggled in a perfect little pastry round. Fresh chervil leaves over the top added a burst of subtle licorice to the tropical palate. 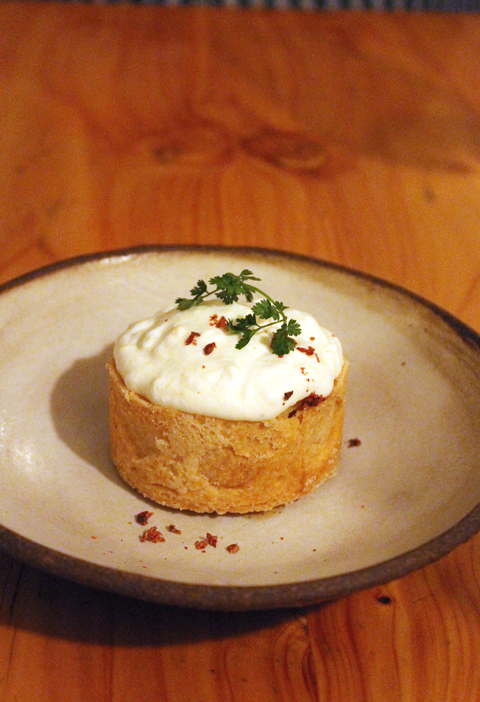 After sensing our interest, our server also brought a small sample of the bitter cocoa sorbet on the menu. It’s intensely chocolatey with a little pool of caramel at the very bottom for just the merest hit of sweetness. Celery leaves, cocoa nibs and candied buddha’s hand make it all pop with texture, tartness and a whole lot of savoriness. Of course, the question on everyone’s mind is: So, how does The Progress compare to State Bird Provisions?

It’s quite good. The flavors are again unexpected, though maybe a little more subtle here.

It’s a different animal. But just like its forebearer, it is the hottest ticket in town. 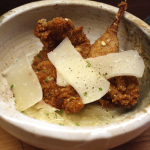