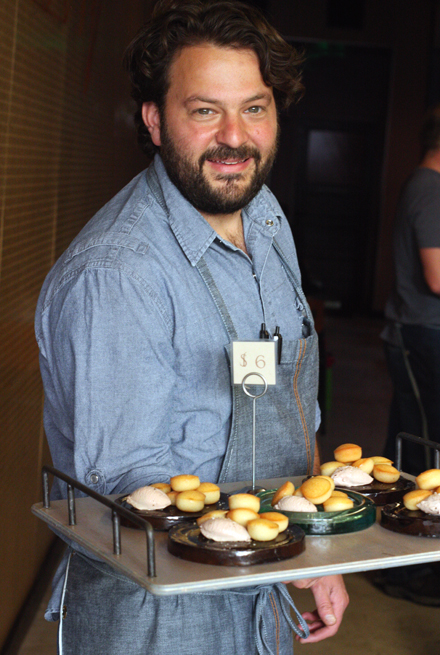 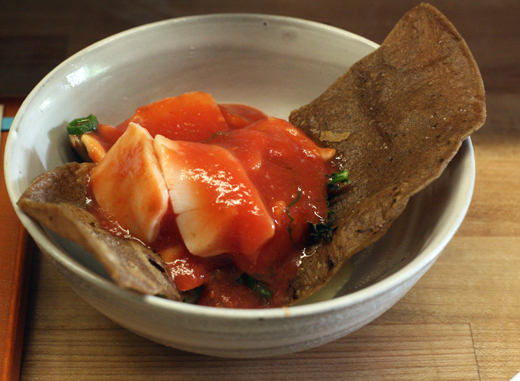 My husband and I decided to spring for dinner there recently. Because we didn’t have reservations, and all the tables at this small establishment were taken, we wound up eating at the tiny bar right in front of the kitchen. It’s a perfect spot for a foodie, though, as you can observe all the cooks in action and Brioza expediting dishes right beside you. 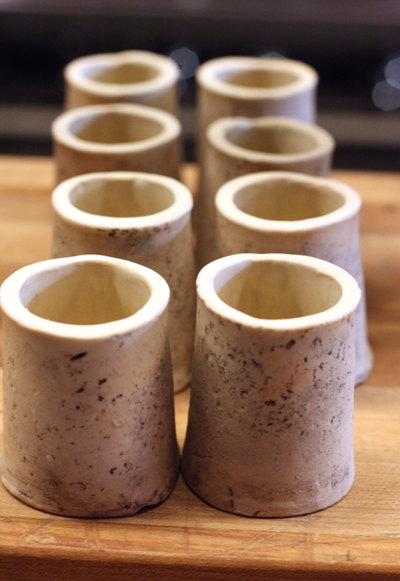 When we were there, the bar was still in its former incarnation, with no stools to speak up. So, you had to stand while eating. Fortunately, you can stash your coats and purses on nearby hooks.

But this weekend, Brioza widened the wood bar just enough so that stools will fit underneath, making for a more comfortable experience.

As when eating dim sum, you have to pace yourself and exercise restraint as the dishes start rolling by. It can get frenzied fast. It’s all to easy to wind up with four dishes in front of you five minutes after you arrive and a server bearing down on you with yet another tray of goodies to choose from.

Do you go for the fried asparagus “frites” dusted with anchovy and Parmesan or hold off for the little iron pots containing bubbling kimchi, pork belly, tofu and clams that’s still to make the rounds? Are you tempted enough by the whipped duck liver mousse with teeny almond cake-like biscuits or do you bypass them for the seafood salsa with avocado? 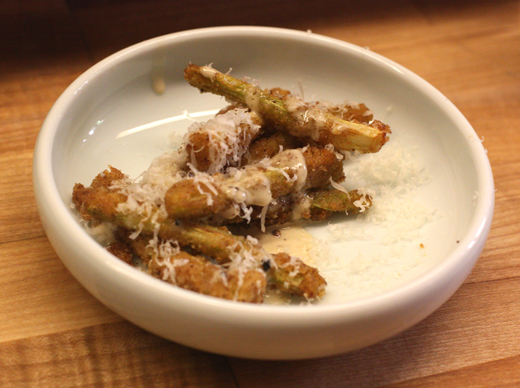 The dishes run from $5 to $18. Besides the ones that circulate on trays and carts, there is a list of “commandables” — items that you order from your server. That includes the namesake “California State Bird with Provisions,” a quail that’s soaked in buttermilk, then battered and fried. It’s like crunchy fried chicken — but with a higher crust to meat ratio, making it even more decadent to eat. The moist namesake bird is served atop sweet-and-sour onions, and garnished with shavings of parmesan. Also worth “commanding” is the glazed pork ribs with chrysanthemum and Japanese togarashi. The meat is impossibly tender and pure pleasure to sink your teeth into. Do pick them up with your fingers. It’s the only way to eat these and get every morsel of meat off the bones. And believe me, you’ll want to do that.

When I inquired how the ribs were cooked, Brioza joked, “We use this thing — it’s called aluminum foil.”

Yes, he rightly guessed that I thought he was going to say he cooked the ribs sous-vide. But no, he did it the old-school way, stacking the ribs on top of each other, then sealing them up with parchment, then foil, before putting them in the oven. The key, he says, is to let them rest for an hour after taking them out of the oven so that the juices redistribute undisturbed.

The restaurant offers a few variations on pancakes, thick, fluffy ones that are a little bigger than dollar-size. We enjoyed a short stack that had guanciale (pig jowl) and ramps cooked into them. A sprinkle of candy cap powder, made from those delightful mushrooms that taste like maple syrup, made this me wish I could wake up to this every weekend morning. The smoothness of ahi tartare cubes was juxtaposed with the coarse, crunch of quinoa in another dish. What really made it was the bonito-rosemary aioli, which tied the whole dish together with the invigorating essence of pine. The sweetness of peas played off smoked trout in another dish with mint and crunchy croutons.

As with tapas or dim sum, some items definitely stand out more than others. One definitely not to be missed is the now justly famous “World Peace Peanut Muscovado Milk,” created by Pastry Chef Krasinski. I’m not even a milk drinker, but I could down about a quart of this stuff. For $2, you get a shot glass of what looks like milk. But it tastes like liquid peanut butter. Peanuts are steeped in milk and cream to create this intense taste sensation. I don’t know if giving every country an endless supply of this beverage would bring about world peace, but I’m sure it would make any tyrannical war lord just that much kinder and gentler. One taste and you’re sure to think so, too. 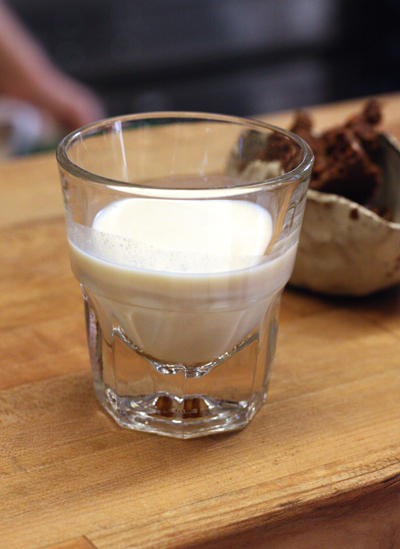 To go along with your peanuty good milk, there are other sweet noshes. Shards of crunchy hazelnut shards poked out of a pool of thick chocolate pudding with the subtle pop of long pepper. Strawberry granita, sweet and icy, underneath a bed of creamy tapioca, is a refreshing way to end things. 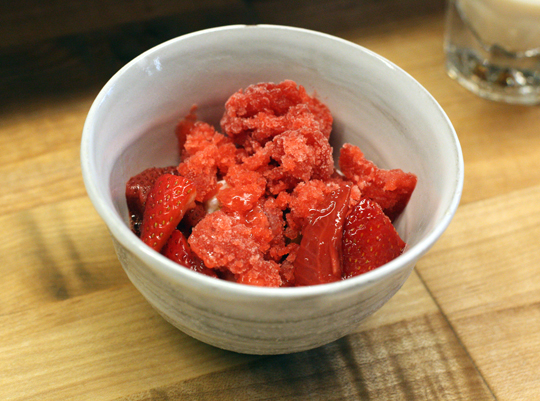 The offerings change regularly, so you’re sure to be craning your neck each time you visit to discover what’s to come. 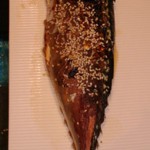