The recipes speak to that, as they are not multiple pages long and require elaborate sub recipes.

Instead, there are things like, “Gravlax with Fingerling Potatoes and Watercress,” “Melon Soup with Black Pepper and Chorizo,” and “Grilled Lamb Ribs with Japanese Eggplant.”

With Brussels sprouts really starting to come into season now, I was drawn to this pasta dish, especially because it has quite a lot of greens in it, what with fresh herbs and two cups of baby arugula.

I figure if I’m going to go to town on the bacon, at least I can stem the guilt a little bit with some good-for-you greens.

After all, this is a rich pasta dish, since you hang on to all that lovely rendered bacon fat and cook everything in it. There’s also a good amount of olive oil and a most generous amount of grated Parmigiano-Reggiano stirred into it. There’s also a couple of tablespoons of butter in the dish. But frankly, you could omit them without losing any flavor, if you are wanting to lighten the dish ever so slightly.

What makes this dish different is that the pasta is first cooked in water for only 5 minutes, then finishes cooking in chicken stock. The rigatoni soaks up all that broth flavor and gets glazed with the bacon fat, olive oil and butter. See why it’s so rich and delicious?

To serve, you top the pasta with a little more grated cheese, plus garlicky, home-made bread crumbs. Take a bite and the crunch of the bread crumbs combined with the bacon fat, almost mimics the taste of bacon bits.

The arugula lends a subtle bitterness that cuts a path through the lushness of the rest of the dish.

It’s like salad and pasta — all in one bite. Made all the better by bacon, of course. 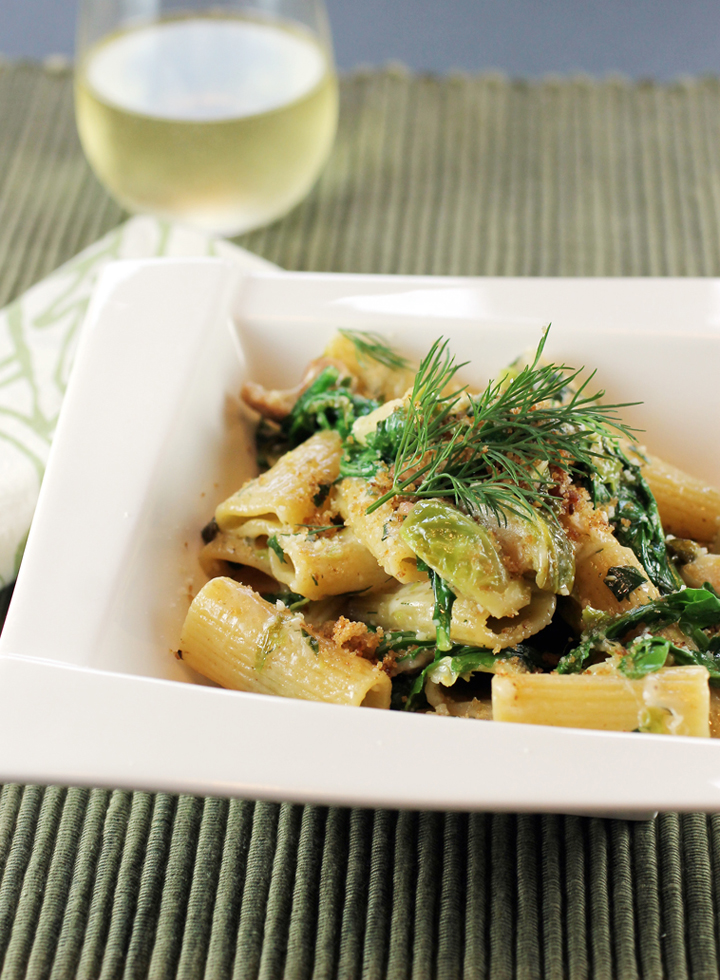 Wouldn’t you like to dig a fork into that?

(Serves 6 as a starter or pasta course; or 4 as a main course)

2 garlic cloves: 1 thinly sliced, 1 smashed with the side of a chef’s knife and peeled

1/4 cup minced fresh herbs, either a mix of flat-leaf parsley, dill, and tarragon, or just parsley

Bring a large pot of salted water to a boil over high heat. Add the pasta, give a stir, and cook for 5 minutes. Drain the pasta in a colander, return it to the pot, and toss with the oil. Use right away or spread the pasta out on a rimmed baking sheet to cool, then hold at room temperature for up to 8 hours.

Select a wide, heavy, not-to-deep pot that can hold most of the ingredients in a single layer, or close to it. Heat 1 tablespoon of the olive oil in the pot over medium heat for a few seconds, just to keep the bacon from sticking when added, then add the bacon and cook, stirring occasionally, for 3 minutes. Add the Brussels sprouts and 1 tablespoon of the butter and cook until the bacon is lightly browned, 3 to 4 minutes more. Season generally with salt and a few grinds of pepper.

Add the parcooked pasta and remaining 1 tablespoon butter and cook, stirring, until the pasta is lightly browned, 1 to 2 minutes. Add the sliced garlic and 1 cup of the stock. Cover and cook until the pasta has absorbed the stock, 3 to 4 minutes. Add another 1/2 cup stock, cover, and cook until it is reduced and the pasta is cooked through and glazed, stirring in a few more tablespoons of the stock, if necessary, to cause a glaze to form. Stir in the smashed garlic clove, remaining 1 tablespoon oil, 1 1/2 cups of the cheese, the lemon juice, and the herbs. If the pasta seems too dry, stir in a little more stock or water.

Remove and discard  the smashed garlic clove. Remove the pot from the heat and stir in the arugula, just wilting it, about 20 seconds.

Divide the rigatoni among six plates (or four as an entree) or wide shallow bowls. Top with remaining cheese and bread crumbs, and serve.

Tip: To impart the taste of fresh, uncooked garlic to sauteed recipes without leaving bits of sliced or minced garlic in the finished dish, add a smashed garlic clove in the last few minutes of cooking, then remove it before serving. For a greater impact, leave it in longer; take it out quickly if just a hint of garlic is what you’re after.

To make toasted bread crumbs, preheat oven to 275 degrees. Dice day-old bread and put it in a bowl. (If you don’t have any day-old bread, you can lightly toast bread in a low oven until just hardened.) Grate 1 or 2 garlic cloves, depending on the intensity of flavor desired, into the bowl using a Microplane. Pick the thyme leaves from 2 or 3 sprigs, and add them to the bowl, then drizzle with extra-virgin olive oil and season with salt and pepper. Spread the bread out on a rimmed baking sheet and bake, shaking occasionally to endure even cooking, until lightly golden, completely dry, and hardened, 30 to 35 minutes. Transfer to the bowl of a food processor fitted with the steel blade and pulse to crumbs, but do not overprocess or they will become sandy. Bread crumbs can be held in an airtight container at room temperature for several weeks.

From “Battersby” by Joseph Ogrodnek, Walker Stern and Andrew Friedman 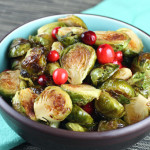 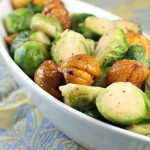 And: Buttered Brussels Sprouts with Chestnuts 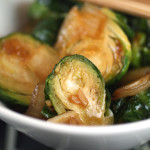 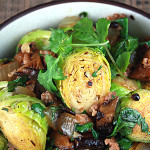