A sherry-laced ice cream to fall head over heels for.

Pedro Jimenez, so glad to finally make your acquaintance. Just where have you been all my life?

It was only recently that I got to know this fabled white Spanish grape that’s typically dried in the sun to make a dark, syrupy dessert sherry wine.

A friend had gifted me a bottle of Bodega Dios Baco Pedro Jimenez and I was waiting for just the right moment to open it. When I did, I was greeted with a heavy-bodied inky wine fragrant with the scent of raisins and dates. The taste was figgy, almost sticky toffee-like, with a bit of aged balsamico on the finish.

It would be great alongside cheese, salumi and almonds. Or used in a sauce to finish duck or quail.

But what caught my eye was a recipe for “Pedro Jimenez Ice Cream with Orange Zest” in the new “The Basque Cookbook: A Love Letter in Recipes From the Kitchen of Txikito” (Ten Speed Press) by Chefs Alexandra Raij and Eder Montero with food writer Rebecca Flint Marx of San Francisco Magazine.

Raij and Montero are chef-owners of New York’s Txikito, La Vara, and El Quinto Pino. Their cookbook focuses on the cuisine of the Basque region in Spain. The recipes are wonderfully rustic in appeal. There’s everything from “Jamon Stock” (made with scraps of Iberico ham) to “Lourdes’s Deviled Eggs with Tuna and Foie” to “Home-Cured Tuna” to “Basque Red Beans with Braised Meats.” Meet Pedro Jimenez. You’ll be glad that you did.

It will take 3 tablespoons of Pedro Jimenez sherry, some patience and a good amount of trust to make this lovely ice cream that tastes like rum raisin ice cream without the raisins.

That’s because it took far longer to make than anticipated, even after allowing the base to chill overnight. That may not be the case if you have an industrial ice cream machine that can freeze your ice cream base almost instantaneously. Using my Cuisinart ice cream maker, everything was going fine after I added the base of cream, whole milk, egg yolks and sugar that had been flavored with fresh orange zest. The mixture was starting to freeze, becoming almost like soft-serve, when the recipe instructed to add the Pedro Jimenez. That’s when my problem happened. The wine totally liquified my base again. Try as I might, even churning it three times longer than usual, I couldn’t get the mixture back to its former soft-serve stage.

Alcohol will lower an ice cream’s freezing point, making it softer and faster to melt in your mouth. It also can make it harder to freeze, depending upon how much you use. Serious Eats has a great story on this here. It advises against adding more than 5 or 6 tablespoons of 80 proof liquor to a quart of ice cream base. The Pedro Jimenez is 17 percent alcohol or around 34 proof. I used only 3 tablespoons, but the ice cream definitely ended up being less than a quart.

Finally, realizing that the mixture wasn’t going to get much thicker beyond a thin smoothie texture, I just put it in a container in the freezer and hoped for the best.

Here’s where tolerance is needed. Even though I put the container in the freezer around lunch time, the ice cream still had not solidified enough to enjoy later that night after dinner.

So, I waited, and waited — until the next day, when I dug a spoon in late in the afternoon. The ice cream had finally firmed up. And it was delicious with a unique flavor. You will taste the sherry and the orange, even though when you put the mixture through a sieve before churning, you will strain out almost all of the visible zest.

Have a little patience, because after two days, you will be richly rewarded with a most sophisticated ice cream to enjoy. 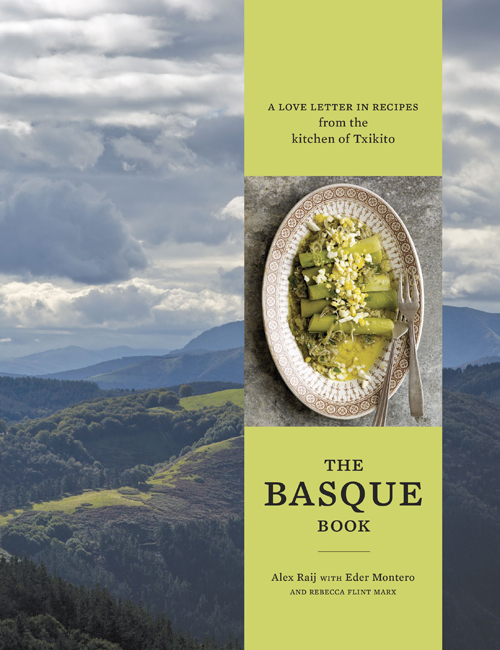 Prepare an ice bath. Nest a metal or glass container in the ice bath and have a fine-mesh strainer handy.

In a saucepan, combine the milk, cream, sugar, salt, and orange zest, place over medium-heat, and bring to a simmer, stirring to dissolve the sugar. While the milk mixture is heating, in a bowl, whisk the egg yolks until blended. When the milk mixture is hot, remove it from the heat. Whisk about 1/2 cup of the hot milk mixture into the egg yolks to temper them, then whisk in another 1/2 cup. Return the tempered mixture to the saucepan and whisk over medium-low heat, tilting the pan occasionally to make sure the egg yolks are not curdling, until the yolks begin to cook slightly and the mixture thickens enough to lightly coat the back of a spoon. Remove from the heat and pour through the strainer into the container resting in the ice bath. Stir the custard immediately to cool it down, then cover and chill overnight.

Transfer the chilled base to an ice cream maker and churn according to the manufacturer’s instructions. When the ice cream has thickened and is almost ready — it will have the consistency of soft-serve — add the sherry and continue to churn. Even after you continue to churn for another 15 minutes or so, the custard may not return to its soft-serve consistency. If that’s the case, just transfer the custard base as is to an airtight container and place in the freezer until frozen hard. It may take freezing it overnight to get a scoop-able consistency. Once ready, the ice cream will keep for up to 3 days in the freezer.

Adapted from “The Basque Cookbook” by Alexandra Raij 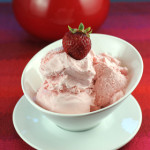 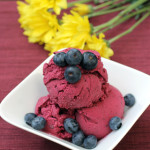 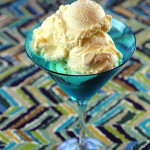 And: Vanilla Ice Cream from Bi-Rite 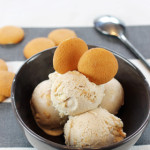