An easy fish dish full of the haunting flavors of saffron, preserved lemon, and sweet paprika.

I remember eating at Joyce Goldstein’s game-changing Square One restaurant in San Francisco.

My best friend and I had saved up our money to dine there, having heard how Goldstein was pushing the envelope of Mediterranean cuisine, which back then was largely relegated to Italian fare. Instead, she expanded greatly upon that, serving up the flavors of Morocco, Turkey, and beyond.

The restaurant did not disappoint. The earthy spices were new to my palate then, and thoroughly captivated me.

So when I received a review copy of her newest cookbook, “The New Mediterranean Jewish Table: Old World Recipes for the Modern Home” (University of California Press), I got doubly excited when I spied a recipe for “Fish with Charmoula.” As Goldstein writes in the book, quite a few diners at Square One took to calling her the “Queen of Charmoula” because this signature fish dish was often on the menu.

She offers up two versions in her charmoula in this cookbook. I chose the one that makes use of preserved lemon since I always keep a homemade jar in the fridge.

In this cookbook, Goldstein, also a former chef at Berkeley’s Chez Panisse, spotlights Jewish home-cooking from North Africa, Italy, Greece, Turkey, Spain, Portugal and the Middle East in dishes such as “Ricotta Pie with Potato Crust,” “Persian Yogurt Soup with Chickpeas, Lentils, and Spinach,” “Lamb Tagine with Prunes and Honey” and “Orange Baklava.”

This fish recipe offers so much bang for the buck. It’s one of those dishes that is a breeze to make yet delivers a powerhouse of flavor. Just marinate the fish in a mixture of garlic, cilantro, parsley, paprika, cayenne, saffron, lemon juice, olive oil and preserved lemon. Then, grill, broil or bake it.

Marinate the fish for 2 to 4 hours in the fridge.

I love the versatility of this recipe. The marinade would be great on chicken or lamb or shrimp, too.

I used petrale sole, which is a thinner fish than what Goldstein calls for. We cooked it on a grill pan on top of the grill grates. Because it’s a thinner fish, it took only about 3 1/2 minutes per side on medium heat.

The marinade colors the fish a dusky-yellow. And it offers up a citrusy, musky-earthy flavor that is deliciously distinctive yet doesn’t overwhelm the fish. It’s positively addicting.

You can meet Goldstein at 12:15 p.m. July 16 at Toque Blanche in Half Moon Bay. The culinary store will be celebrating its 10th anniversary with demos, tastings and a 10 percent discount on all products.

Goldstein will demo a recipe, as well as sign copies of her new cookbook.

Peel of 1/2 to 1 preserved lemon, homemade or store-bought, rinsed and finely minced

Combine all charmoula ingredients — from garlic through lemon juice — in a bowl and mix well.

To broil or grill the kebabs or fillets, preheat the broiler or prepare a fire in a charcoal grill. Cook, turning once, until the fish flakes when tested with a fork, about 4 minutes on each side. To bake the fillets, preheat the oven to 450 degrees, arrange the fillets in a single layer in a baking dish, and bake until the fish tests done, 8 to 10 minutes. Drizzle the remaining charmoula over the top and serve hot.

From “The New Mediterranean Jewish Table” by Joyce Goldstein 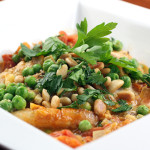 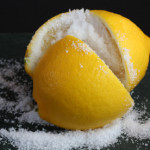 Plus: How to Make Your Own Preserved Lemons