“The World” being assembled at the San Francisco dinner prepared by the Roca brothers.

It was a little like getting a backstage pass to a U2 concert.

That’s how I felt when I was invited to hang around in the kitchen on Wednesday night when the three Roca brothers, owners of the illustrious El Celler de Can Roca in Girona, Spain, were in San Francisco to cook a series of dinners at the Julia Morgan Ballroom.

After all, in the culinary world — Joan (chef), Josep (sommelier and maitre d’) and Jordi (pastry chef) — are rock stars of the utmost magnitude. Their restaurant not only has garnered three Michelin stars, but is rated #2 on the current list of “The World’s 50 Best Restaurants,” (they were #1 in 2013 and 2015). Jordi, Joan and Josep Roca in the Julia Morgan Ballroom.

What’s more, the multi-course, three-hour dinners were not open to the public. Instead, they were by invitation-only, with the 100 guests each night predominantly clients of Spanish bank BBVA Compass, which was sponsoring the Roca brothers’ whirlwind cooking tour. It spans three continents in five weeks with stops in London, Hong Kong, Phoenix, San Francisco (this week), and finally, Santiago de Chile.

Although Joan had come to the Bay Area in the spring on a prior scouting trip, this was the first time the other two brothers have visited San Francisco.

The 2016 tour is the third time BBVA has sponsored such an endeavor for the brothers. And what an undertaking it is. El Celler Can Roca closes for the entire month of August just for this, and almost the entire staff comes along for the ride. We’re talking the brothers plus 40 others. The ballroom before the guests arrived. Some of the featured wines for the evening.

Besides their personal luggage, the brothers travel only with their knives, and a few special ingredients, such as distillations that would be too difficult to make on location. One-of-a-kind serving ware is sent ahead. They go through one Iberico jamon leg per dinner. They source most everything else locally, making a point to use a few key ingredients particularly indigenous to the cities they are cooking in.

In each city, they also choose two lucky local culinary students, who will spend four months apprenticing at El Celler Can Roca. 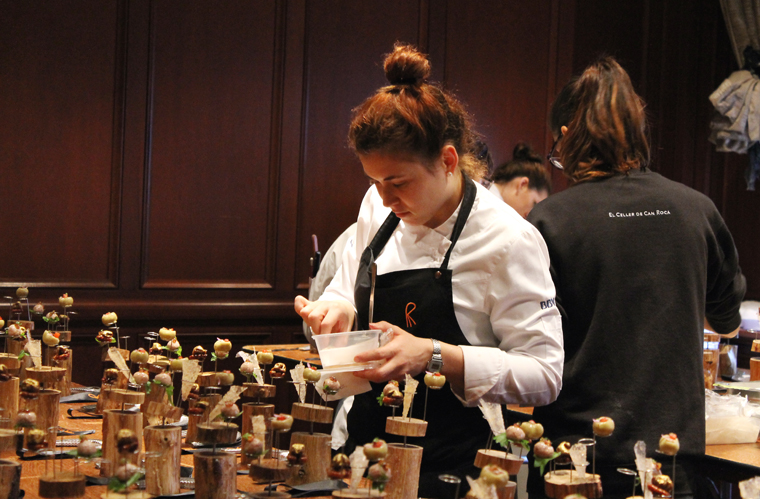 You need steady hands for this. Putting together “Memories of A Neighborhood Bar.” Plating garnishes for the vegetable consomme with abalone. The World On Our Tour (one bite wonders representing various cities):

Memories of a Neighborhood Bar:

Maybe it’s the always-famished natural look that I possess, but the brothers took pity on me and actually let me try a few of the courses, as I stood with fork in hand leaning against one of the stainless steel prep tables, trying desperately not to get in the way of the scurrying brigade of cooks. 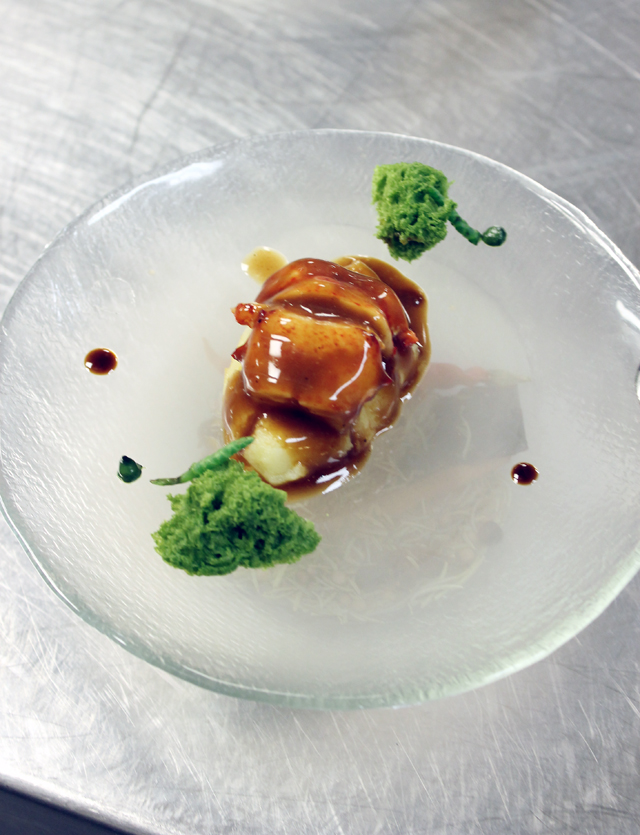 The most tender lobster on top of a plastic-wrapped bowl in which herbs, leaves and smoke had been added. As your pressed down on it with your fork, the smoke billowed out, as if you were sitting before a campfire in the woods. Halibut with a unique texture (almost if it had been smoked, but much more succulent) from being first cooked sous vide at a low temperature for only four minutes before being braised. Suckling pig — which I didn’t get to try, unfortunately. Wah! Melt-in-your-mouth veal with a hit of heat from chili threads and sweetness from blueberries.

From my conversation with the brothers:

On where they’ve eaten here this time and on an earlier reconnaissance trip:

On the ingredients for the San Francisco dinners:

The sourdough for the ice cream is from Tartine. They had never worked with live abalone before. Dandelions and local halibut also were new to them. 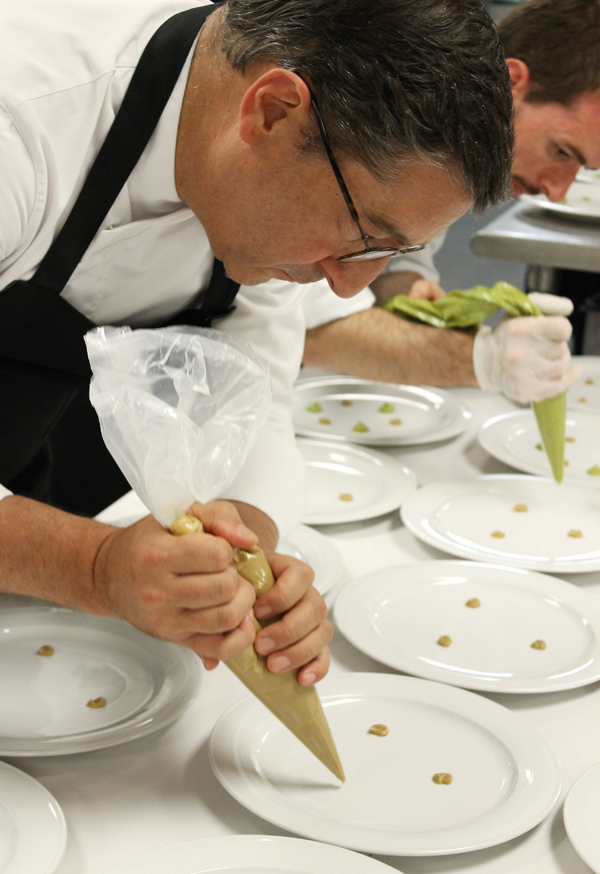 Joan busy in the kitchen.

On how San Francisco compares to their other stops on the tour:

Joan: “San Francisco definitely ranks very high. The level of gastronomy is so high, the ingredients are fantastic, and the population really loves and craves fine dining. We haven’t seen that on such a level in the other places we have visited.”

The place they would most most like to cook, but have yet to visit:

What they have learned most from these tours:

Joan: “That we don’t really know that much and have a lot to learn.”

And now a final word from me about the desserts. They were mind-blowing.

I don’t think I’ve ever seen the likes of the plate used to hold the sourdough ice cream. It looked a little like free-form paper-mache. But it was far more solid and boasted a motor inside that made the dish heave up and down as if it were alive. Jordi explained that he thinks of sourdough as being alive, and in that way, a metaphor for life. 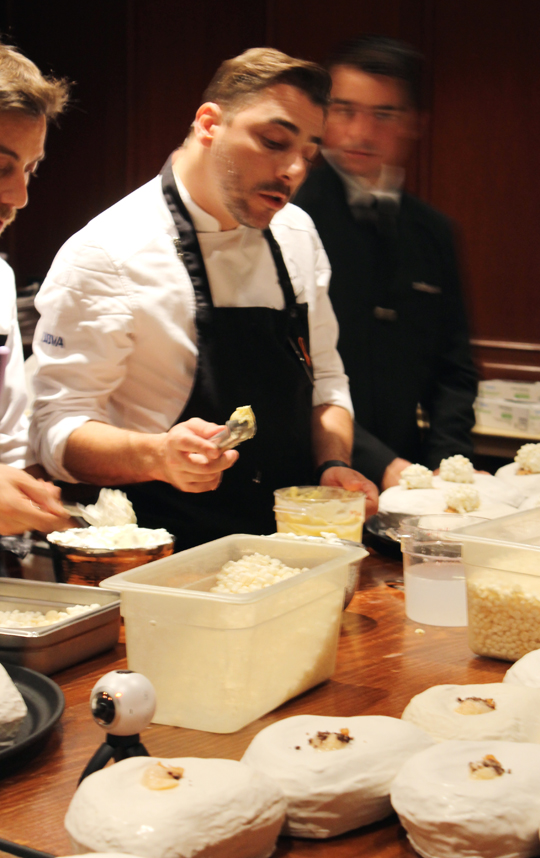 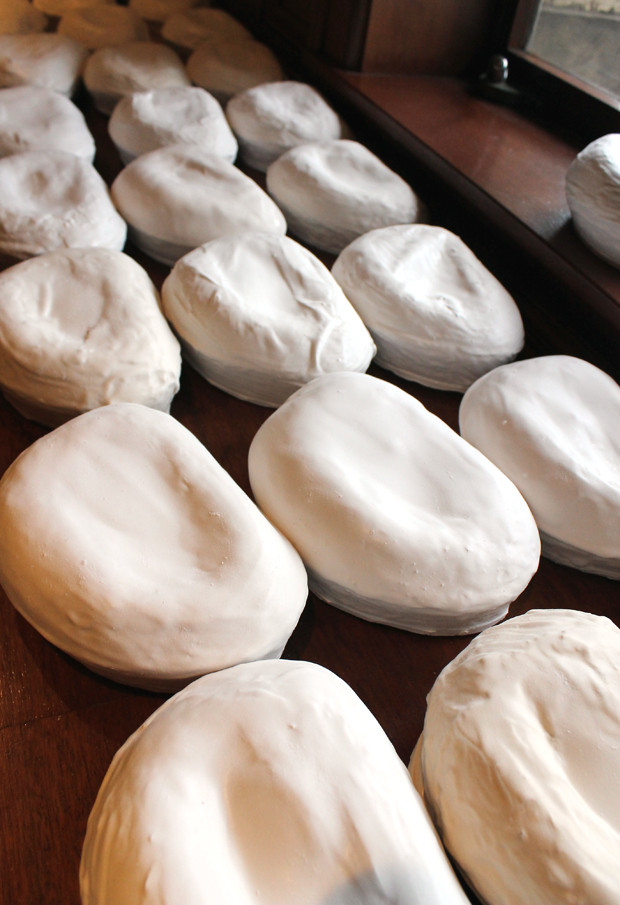 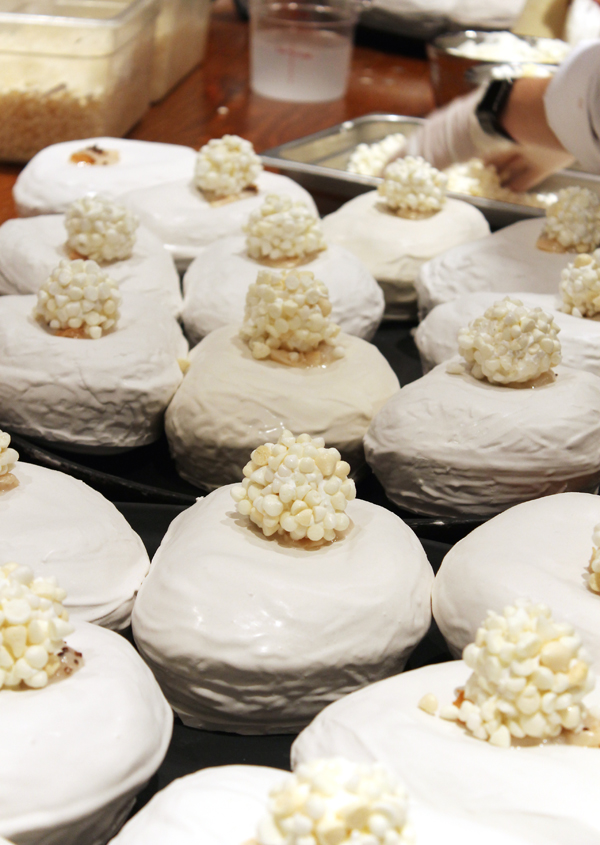 As if that didn’t make your head spin, the final dessert surely did. Puddles of fruit gels and purees were placed on a “dish player,” a cromaphone that translates colors into music.

Underneath each plate was an actual cell phone running an app that allowed music to play as each guest spun the top of the plate, with each color corresponding to a different sound. 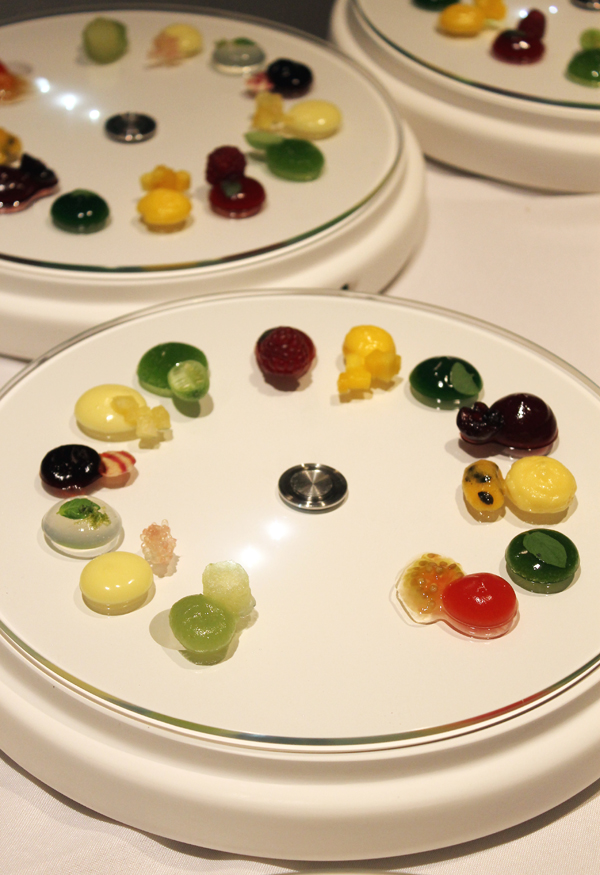 The scene just before the phonographs went out to the diners.

It was wild and wacky to say the least. Even more so, because more than a half dozen cooks were crowded into a small, shuttered room, scrambling to test each dish just before it went out. Imagine an orchestra tuning up, and you’ll get the drift.

You have to hand it to the Roca brothers. When they come to town, they definitely rock it out.