There’s “Figs with Foie Gras Mousse” that’s all of seven ingredients yet looks like it could be a fancy amuse bouche at an haute restaurant. There’s “Lamb Scallopini,” a fresh take on the traditional veal version , and “Buckwheat Crepes with Sauteed Apples and Toffee Sauce” that you’ll want to eat not only for dessert, but breakfast.

“Porcini Braised Chicken Thighs” involves a nifty trick for searing chicken. Normally, recipes will call for chicken to be seared until deeply golden on both sides. In her recipe, Pomeroy instructs you to sear the chicken thighs only on their skin side with a heavy plate weighting them down. Then, arrange them, skin-side up, in one layer over carrots, celery and onion in a roasting pan. Pour in a mixture of white wine and chicken stock, taking care not to submerge the chicken completely but just below its skin so it stays crisp.

Cover the pan with foil for most of the roasting time, then remove it to crisp the skin just before serving. The skin may not rival that of fried chicken, but it definitely is sturdier than the usual limp type found in other braising dishes. Searing the chicken only on the skin-side probably helps keep the flesh tender, too, as the thigh cooks through gently in the broth mixture.

The dried porcinis that are mixed into the vegetable-broth foundation really impart a lovely depth of earthiness.

The dish is more brothy than I thought it would be. But you could always remove the chicken thighs and vegetables, then simmer the broth on the stovetop to reduce it to a thicker consistency, if you like. Or just do what I did — serve plenty of bread to sop up all the wonderful sauce. My husband was actually drinking it up with a spoon.

This is a homey dish just perfect for digging into in winter. 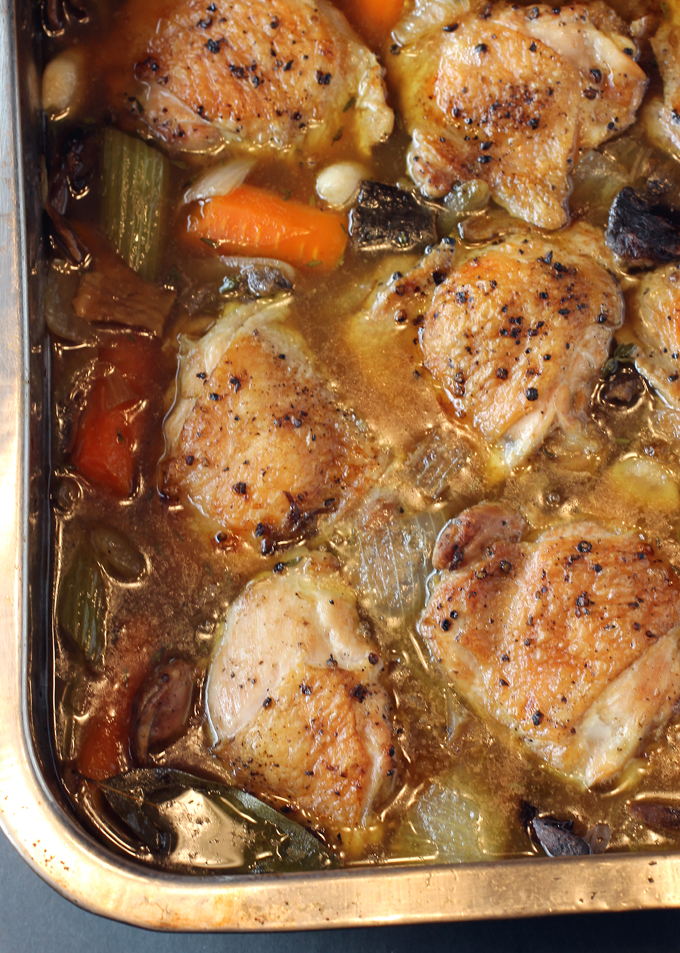 Enough to feed a hungry family.

In a large Dutch oven, heat 1 tablespoon of the oil over medium heat. Add the carrot, onion, and celery and sauce for 6 to 7 minutes, until the vegetables get some color. Add the porcini, garlic, thyme, and bay leaves and mix to combine. Turn off the heat but leave the Dutch oven on the burner.

Preheat the oven to 375 degrees. Season each chicken thigh with 1/2 to 3/4 teaspoon salt (depending on its size; a large thigh will weigh about 10 ounces and a small one about 6 ounces), and 1/4 teaspoon pepper.

Heat a black steel pan  or cast-iron pan over high heat until very hot. Add 1 tablespoon of the oil and heat until the surface is rippling but not smoking. Working in batches to avoid crowding the pan, add 4 chicken thighs, skin side down, and lower the heat slightly, to medium-high. Weight down the thighs with a heavy plate to create an even sear across the entire surface and cook for 5 to 6 minutes, until evenly golden but not too dark in any spots. Check after the first 1 to 2 minutes to ensure no black spots are forming and lower the heat as needed. Place the thighs, skin side up, in a single layer on top of the vegetables in the Dutch oven. (Note: If you don’t have a Dutch oven large enough to hold the chicken thighs in one single layer, transfer the vegetables to a roasting pan and place the chicken thighs on top.) Repeat the searing two more times with the remaining oil and chicken thighs, rinsing the pan and wiping it completely dry after each batch.

In a saucepan over medium heat, bring the stock and wine to a simmer. Pour the stock into the Dutch oven (or roasting pan); the edges of the chicken should be submerged but the skin should be exposed. It’s important not to cover the chicken skin completely or it won’t get crisp. You may not need all of the stock-wine mixture to do this.

Cover with a tight-fitting lid (or with aluminum foil if using a roasting pan), place in the oven, and cook for 1 1/4 hours, or until the chicken is completely tender. Turn up the oven temperature to 400 degrees, remove the cover or foil, and continue to cook until the chicken skin is crisp, about 15 minutes.

Remove from the oven, discard the thyme sprigs as best you can, and serve directly from the pot. 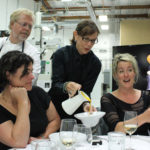