Chef Brandon Jew expediting in the kitchen of his Mister Jiu’s.

For many years, my Uncle George had his insurance office on Waverly Place in San Francisco’s Chinatown. He’d often take clients for lunch or drinks to Four Seas restaurant across the street. Back then, it was the place to socialize, a glamorous spot where so many friends and family members of my generation remember attending celebratory banquet meals.

So maybe it was appropos that my first visit to Mister Jiu’s, which reincarnated that space a year ago, came just a few weeks after my uncle’s passing last month. Making my way through that tucked-away street, I somehow felt I was walking in his shoes, seeing this venue past, present and future.

Chinatown stopped being a destination dining scene long ago for so many Chinese-Americans of my generation. These days, if we head here at all, it’s because we’re playing tour guide to visiting friends. But Chef Brandon Jew, who grew up in San Francisco, was lured here to create a restaurant that he hopes will reinvigorate this historic neighborhood.

Certainly, he’s succeeded in drawing more Millennials, Generation Xers, and Baby Boomers to this area, as evidenced by the crowd I saw dining here on a Saturday night. 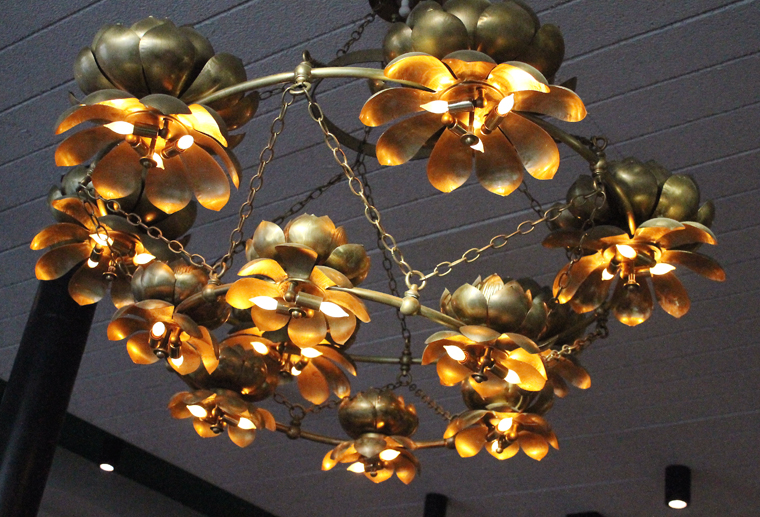 Original chandeliers from the Four Seas. 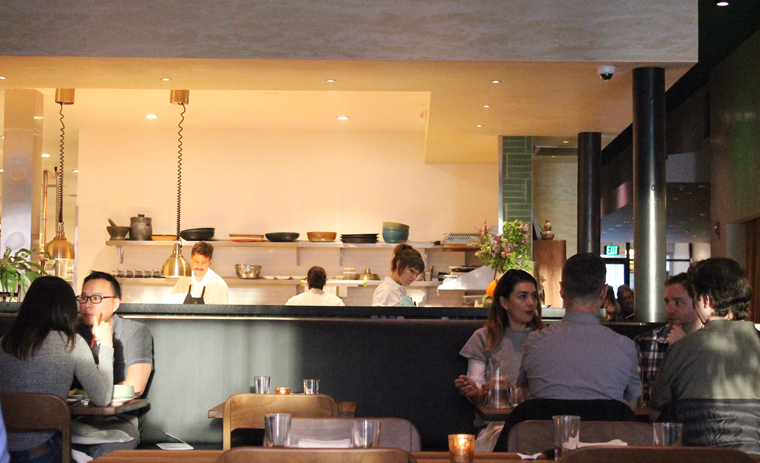 The open kitchen can be seen from the dining room.

Located on the second floor, the restaurant has a wall of windows that overlook bustling Grant Avenue. The lotus-flower chandeliers from the original Four Seas have been polished to a gleam, giving a touch of elegant nostalgia to the space.

With five in our party (we paid our tab, though Jew sent out a couple dishes gratis), we were seated at one of the big round tables with a built-in lazy susan. The restaurant was bustling that night, and it can get loud, given the tall ceilings. The Harmony (front) and the Orange Jiu’lius (back).

But when the food is this good, who needs conversation, right? The craft cocktails have fortune cookie-wish names. Hmm, do you feel like Courage or Wealth tonight? Or maybe Clarity? I was in the mood for Harmony ($13), a grassy, minty blend of gin, shiso, green tea, ginger and lime. There’s also an Orange Jiu’lius ($12), in a nod to the Orange Julius that operated in Chinatown for years. The original creamsicle-like drink was non-alcoholic. Here, it’s a more potent with rum and vodka, in addition to orange juice, condensed milk and vanilla. Best ye, 50 percent of the proceeds from each Orange Jiu’lius is donated to Chinatown fire victims. So far, more than $10,000 has been raised, our server said. 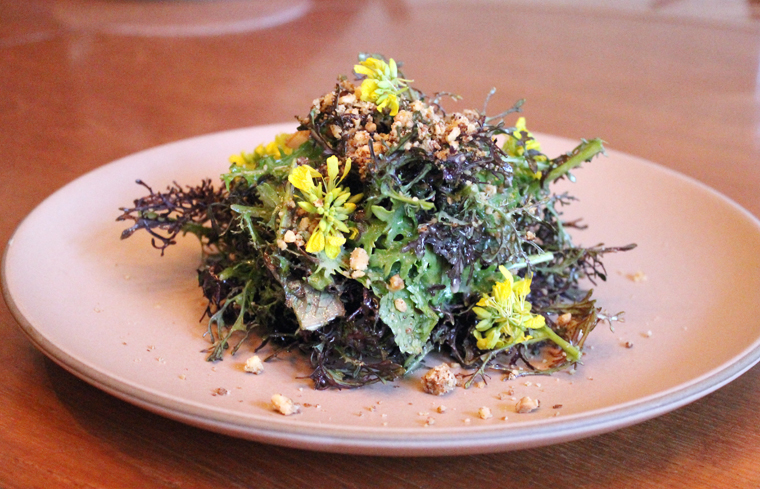 Everything on the menu is made for sharing. Mustard green salad ($14) was peppery yet sweet from Asian pear and dates, and crunchy from nicely spiced walnuts. My dining companions are more connoisseurs of turnip cakes than I am, so I asked for their verdict on the crispy scarlet turnip cake ($8) with black olives and mushrooms. They would have preferred the starchy cakes to be more pillowy. These seemed to be seared on both sides, rather than just one, compacting them more.

Growing up, I suffered through too many prawn toasts that were grease bombs. Mister Jiu’s has elevated prawn toast ($9) to another level. A moist, and not overdone, shrimp filling rests on fluffy English muffin-like rounds. There’s so much lightness, freshness and beauty to this version. An addicting version of shrimp toast. 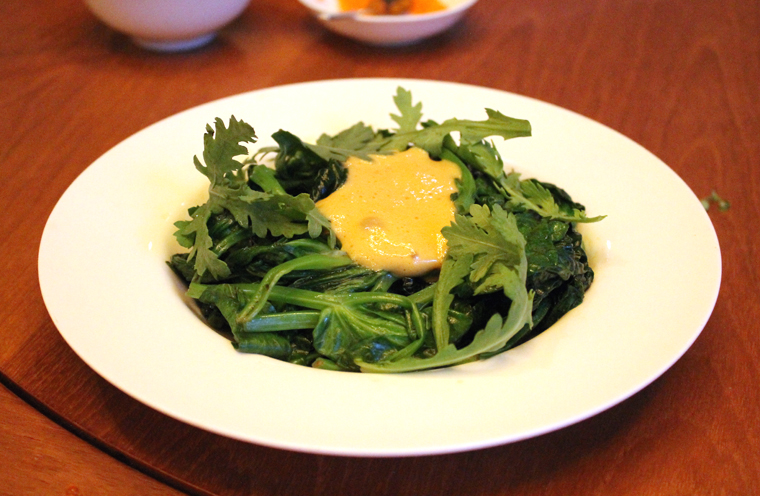 Chilled beef tendon ($13) was fabulous, like a beef version of head cheese. Thin slices sported a mosaic of beef and beefy-tasting aspic.

“Tendrils, Greens and Stems” ($15) is a tangle of tender spring greens crowned with a creamy sea urchin and roasted garlic sauce. The brininess adds a nice, funky depth to what otherwise would have been just a pleasant dish of greens. It reminded me a little of the flavor of fermented tofu.

Cheong fun ($16) is always a must-order for me at dim sum restaurants. Though, I’ve never had one before garnished with such luxurious touches as Dungeness crab and caviar. The rolled-up rice noodles were custardy as they should be, though they may have lacked some of the chewiness expected. Not your typical fried rice; this one is plentiful with Wagyu beef.

Steak fried rice ($21) is one of those dishes you can’t stop eating, with the fluffy grains mixed with bits of Wagyu skirt steak, garlic, broccoli and bottarga. It’s comfort food made substantial.

The whole Salt-Baked McFarland Springs Trout ($49) is brought to the table with flourish. The top of the salt crust is neatly removed already, revealing the pinkish flesh, which the server dabs with trout roe. One of my favorite dishes of the night, the trout’s flesh was rendered tender, succulent and sublime. Don’t forget to dig for the coveted cheek, the silkiest morsel. The trout is garnished by the server. The whole trout, wrapped in lotus leaves and cooked in a salt crust.

With a bunch of hearty eaters, we splurged on the one pound serving (you can also opt for a half pound instead) of the Glazed Berkshire Char Siu BBQ Pork for $80. I don’t think any of us had ever paid anywhere near that for char siu before from a Chinese deli. But then, this was not that. The quality of the pork, rich with decadent layers of juice-squirting fat, was evident from the first bite. The thin slices could be garnished at will with condiments of hot mustard and a dazzling beet hoisin sauce. Yes, think the fruity-sweet-savory taste of hoisin sauce but with the added depth of earthiness from beets. Best yet were the steamed buns, stacked in two ceramic steamers. Formed like lotus petals, these were not only the loveliest buns I’d ever seen, but probably the most delicately textured ones, too. It was truly like eating a cloud in carb form. Yes, this is what a pound of Berkshire BBQ Chinese pork looks like. The best steamed buns you may ever have.

With Melissa Chou, formerly of Mourad in San Francisco, handling the desserts, you should definitely save room. A last bite of chocolate.

The Black Sesame Cake ($13) hit the spot for me, as a ginger lover. The nutty tasting cake was complemented with roasted pear and ginger mousse, as well as crunchy ginger brittle with a nice sharp warmth.

Clusters of chocolate cashew puffed rice were offered on a plate for the final bites.

No doubt my late-uncle, being of a different generation, would have been startled to see prices like these in the Chinatown he knew. But I also like to think he would have been pleased to see his old haunt still going strong, in a whole different way.