If you’re tired of the same ol’ waffles, scrambled eggs and corned beef hash for brunch, then you’re in for a treat at Jugaad Cafe.

That’s the name of the pop-up brunch offered on Saturdays and Sundays, 10 a.m. to 2:30 p.m., at Saffron Bistro in San Carlos.

Owner Ajay Walia, who also has Michelin-starred Rasa in Burlingame, started this hybrid brunch in March. It features a few classic Americana dishes, but also a bevy of Indian-influenced ones so potently flavorful that they’re sure to jolt anyone to rise and shine.

The name “Jugaad’’ is a colloquial term in Hindi and Punjabi that roughly means “hack.” It’s what Walia did to traditional brunch, turning it on its head. Who wants hashed browns when you can have masala tater tots instead?

He was prompted to create the menu from his own experience of craving a more adventurous brunch on weekends, even if his kids only wanted pancakes with maple syrup. As such, this menu has something for everyone — expected fare like a strawberry-topped Belgian waffles for the kids, plus more unusual items such as savory South Indian lentil beignets with coconut chutney for folks desiring something different. Walia invited me in as his guest a few weeks ago to try some of the dishes.

Start with a soothing, warm cup of chai ($3) to wake yourself up gently. 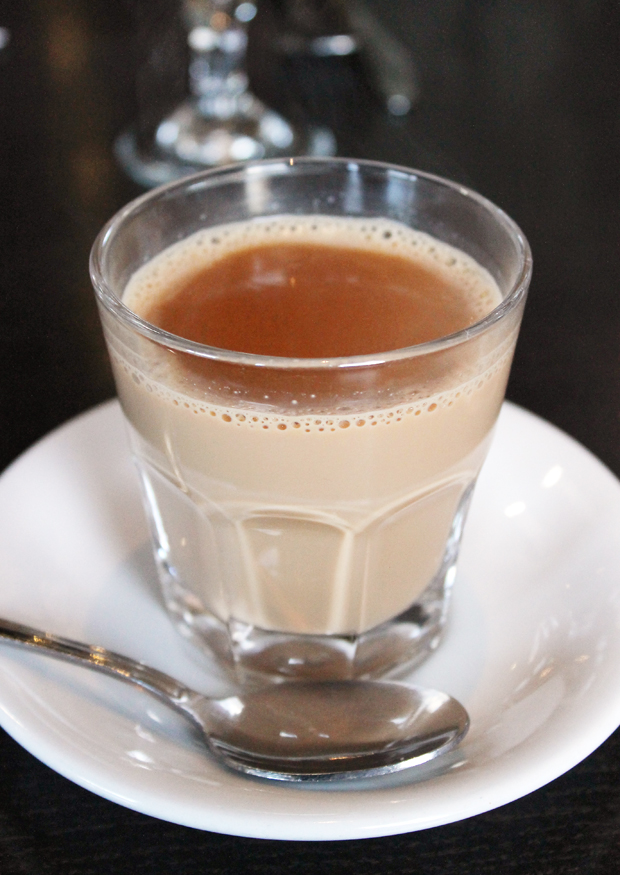 Warm up with milky chai tea.

Masala Tots ($5.95) are a must-order. In fact, my husband went so crazy for these that he suggested Walia put them on his bar menu at Rasa because they would be dynamite with beer or a cocktail. Jugaad may purchase the ready-made potato fritter nubbins, but it makes them all its own. They’re fried to a crisp and tossed with Indian masala. It’s as if they’ve been coated with their own gourmet ketchup that’s sweet, savory, and tangy, rendering them completely addictive. 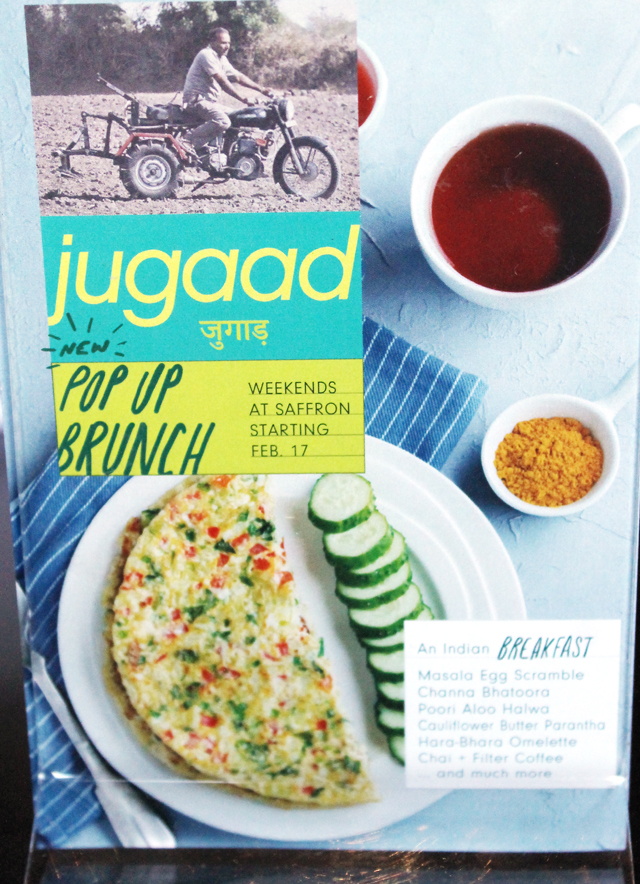 Signs on the tables tout the new brunch pop-up.

Pav Bhaji ($9.95) is like a vegetarian Sloppy Joe. Griddled, tender little buns come alongside a bowl of stewed vegetable and potato masala mash. Spoon some inside the split bun and it will satisfy any morning carb hankering. 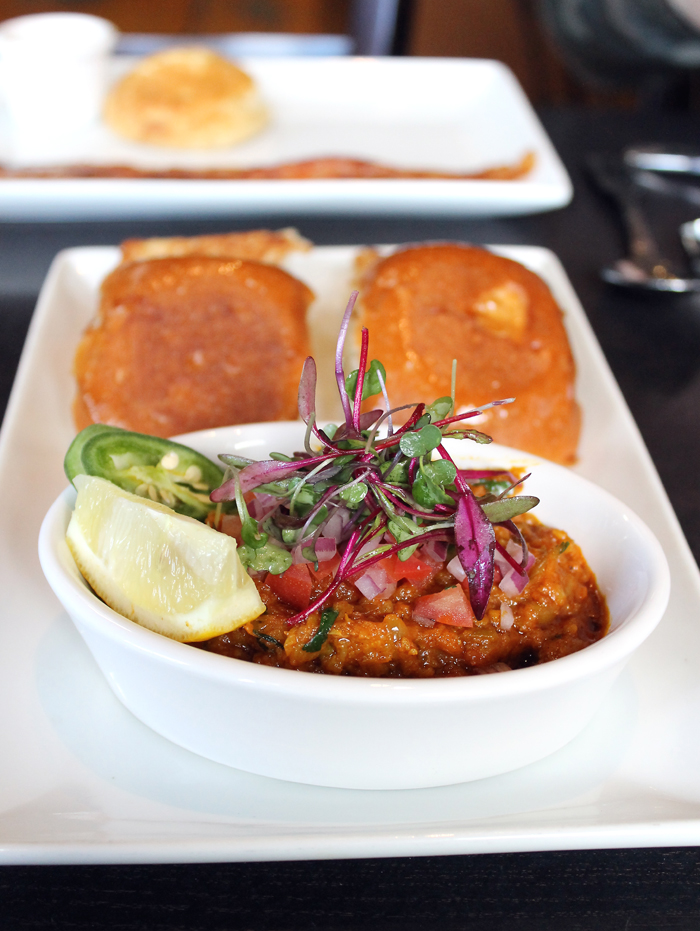 The “big puffy bread” nobody can ever resist.

Tamarind and earthy spices flavor the Chatpatta Aloo ($7.95), another vegetable hash that is sweet and spicy, and hard to stop eating.

Channa Bhatoora ($10.95) is otherwise known as “the big puffy bread.” It’s big all right, and airy and hollow inside. It gets its magnificent rise from yogurt. Tear off a piece and use it to scoop up the channa masala, chickpeas heady with chiles, ginger and tomato.

Walia joked that Indians love their carbs, and bread dishes do abound here. Poori Aaloo Halwa ($11.95) offers up a mix of savory and sweet tastes. The puffed whole wheat bread comes with a side of spicy potato as well as a side of sweet halwa, a thick pudding made with semolina, saffron and pistachios. 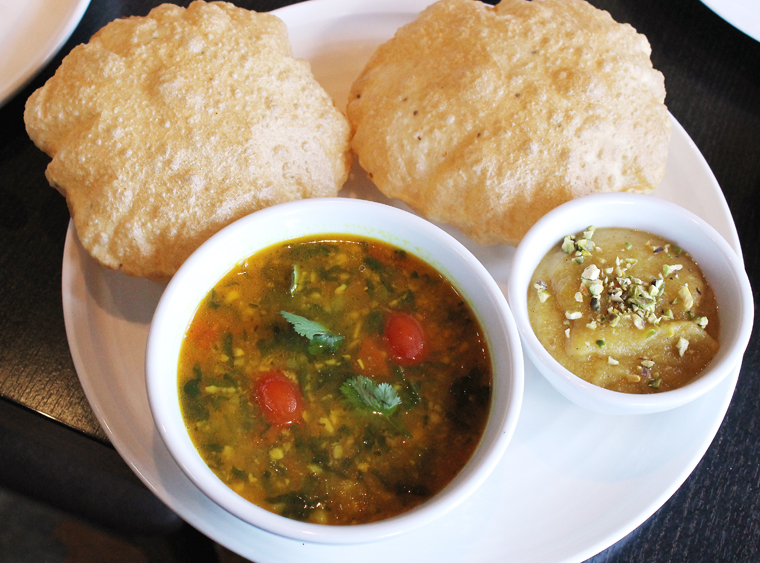 Then there is Gali Aloo Parantha ($11.95), wheat bread stuffed with mashed potatoes and served with a cooling yogurt raita.

“BX3” ($7.95) is biscuits, butter and bacon. The biscuits are amazing — crispy on the exterior and fluffy tender inside. The bacon is candied, as well as spicy; and the butter gets a sprinkle of chile powder, too.

Chicken sausage ($7.95) doesn’t come in links here. Instead, they are chicken meatballs covered in a vibrant, rich and creamy sauce. 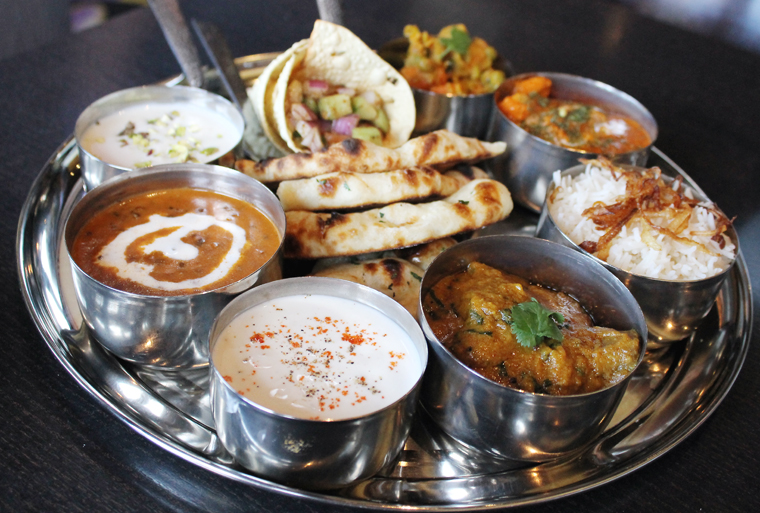 Masala Omelet ($10.95) is cooked completely through, the way those of Indian heritage prefer it, Walia explains, so it might not be to your liking if you like your omelet a little more runny. Made with three eggs, it’s kind of like an omelet pancake or flat frittata made with onions, tomatoes, bell peppers, green chiles and cilantro. It’s served atop sliced bread, and comes with a side of tater tots.

Saffron has discontinued its daytime buffet on weekends to accommodate the brunch pop-up. But those who prefer a mini buffet of flavors and dishes can enjoy the Shikarii Thali ($14.95), a silver platter holding an assortment of non-vegetarian curries, rice, raita, spicy cucumber salad, naan and dessert. 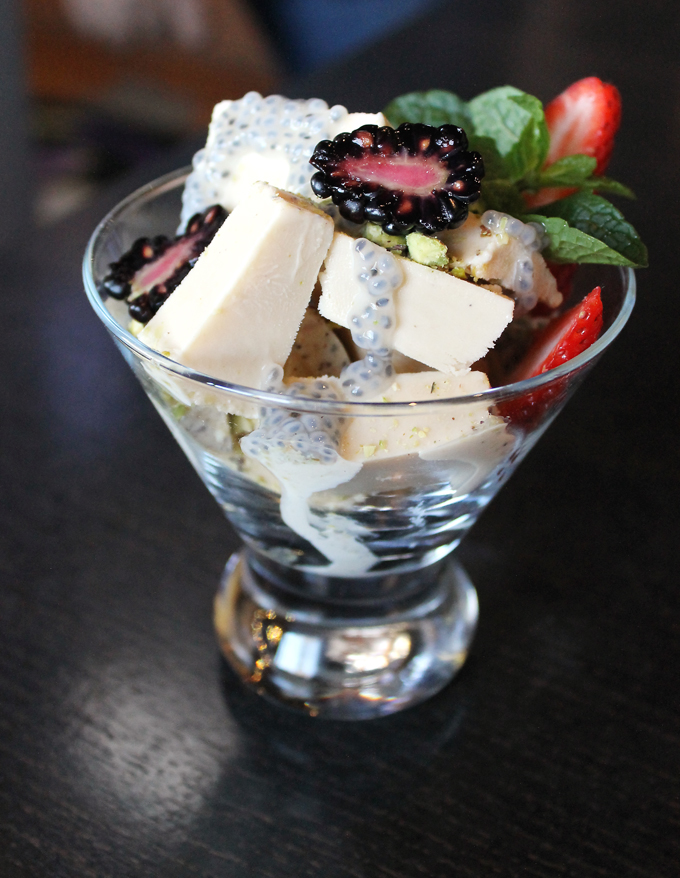 If you still have room, more dessert can be had by ordering the Classic Kulfi ($7), house-made Indian pistachio ice cream with a drizzle of condensed milk, and garnishes of fresh fruit and basil seeds.

Brunch has rarely been this inspired. 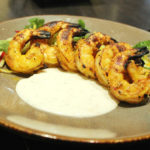