Not your usual sweet-and-sour pork.

This is not your battered to oblivion, deep-fried, unnaturally red, gloppy sauced sweet and sour pork that’s a standard at Chinese restaurants.

No, this is a home-style version that eschews all of that — and tastes even better as a result.

“Sweet-and-Sour Spare Ribs” is from the new cookbook, “Chinese Soul Food” (Sasquatch Books), of which I received a review copy. It’s by Hsiao-Ching Chou, a Seattle food writer and cooking instructor. She grew up in Columbia, MO, where her parents settled in 1975. At the time, there were no Asian markets there. In fact, the family had to drive 10 hours to Chicago to stock up on decent soy sauce and other Chinese provisions. Her parents eventually opened a Chinese restaurant in 1980, which lasted for 23 years.

The book is filled with 80 recipes that are approachable and comforting. You won’t find a taxing recipe for Peking duck here, but a more do-able one for “Fragrant Crispy Duck Breast.” There are Sichuan staples such as “Stir-Fried Shoestring Potatoes.” And dumpling recipes galore, including directions for making your own wrappers from scratch.

These spare ribs couldn’t be easier to make. The method is akin to making glazed carrots — you just let the liquids cook down and reduce on the stove-top until a concentrated, thick, sticky sauce is created. In this case, those ingredients include soy sauce, Chinese black vinegar, Shaoxing wine, garlic, green onions, water and rock sugar. If you’re unfamiliar with Chinese rock sugar, it comes in packages on the shelf at Asian markets. Sugar and water are the basis of the crystallized “rocks” that are craggy lumps with a slight golden color. They apparently have a less sweet flavor than conventional granulated sugar and are purported to give sauces a glossier look. If you don’t want to make a special trip to the store for it, Chou suggests substituting brown sugar instead. These spare ribs are tender, sweet-salty, and only ever so tangy. If you like a more pronounced perkiness, you could always add a little more vinegar to the cooking liquid.

This is a wonderfully rustic dish that begs for a bowl of steamed rice alongside. This dish is not anything like your typical restaurant sweet-and-sour pork. Instead, it possesses a pureness that is such a welcome change. A dish to gnaw away on happily.

Cut the ribs into individual riblets.  To do this, look at the back of the rack of ribs, where it should be easier to see the bones. Make cuts between the bones to create riblets.

In a large Dutch oven over high heat, put the ribs and about 3 1/2 cups of the water, making sure the ribs are covered. Bring to a boil, then reduce the heat to medium low. Simmer for about 5 minutes to release some of the scum. Remove the pan from the heat and transfer the ribs to a large bowl. Rinse the pot.

Return the pot to the stove. Add the ribs, the remaining 3 1/2 cups water, the soy sauce, vinegar, sugar, wine, garlic, and onions. Bring to a boil over high heat, then reduce the heat to low and simmer, stirring occasionally, for 45 minutes. Check the largest piece of rib for tenderness. If it’s fork tender, increase the heat to medium high and let the sauce reduce, stirring occasionally, for about 15 minutes. As the sauce reduces, the sugars will caramelize and the sauce will get thicker and stickier. Watch and listen carefully to the pot. When the sauce has reduced enough that you can hear sizzling and see the bottom of the pan, remove the pan from the heat. Serve as an appetizer or with rice as part of a meal.

Note: Ask your butcher to cut a rack of ribs into three horizontal pieces, then to make cuts between the bones to create the bite-size riblets. 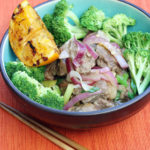 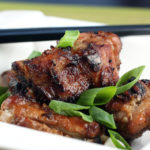 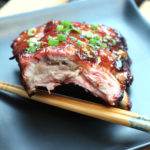