Talde, chef-owner of Talde in Brooklyn, shares 75 recipes that carry his own unmistakable spin and take-no-prisoners attitude. Imagine “Apple Pancakes with Five-Spice and Coconut-Brown Butter Syrup” for breakfast. I sure could — in a heartbeat. His famous “Pretzel Pork-and-Chive Dumplings,” take a pork-chive filling and snuggles it inside won-ton wrappers that are first boiled in a pot of baking soda-infused water just like a pretzel before being shallow fried to leave them crisp but also chewy. His roasted beet salad combines all the flavors of pastrami to create a familiar yet wholly different dish.

With the orange beef, he doesn’t stray too far from the classic roots. What he does is refine it — big-time. He uses filet mignon so that the beef in this dish is supremely tender. He combines fresh orange juice with rice vinegar, soy sauce, sugar, fish sauce, garlic, ginger and Worcestershire sauce, reducing it all into an intensely citrusy, umami-loving enhancer. It makes for a much less heavy dish yet with heaps of extra flavor.

The broccoli is cooked separately. OK, he tells you to buy it from your local Chinese restaurant. But it’s just as easy to steam it yourself at home.

The piece de resistance is the garnish of charred orange wedges that get sizzled in a hot skillet to render them caramelized. Talde says this is optional. But really, it’s so easy and such a great addition that it’s a must-do in my book.

You’ll end up with extra sauce. Use it later to stir-fry chicken, shrimp, green beans, eggplant or other veggies. Or heck, just make a second batch of orange beef. You just might be tempted to do so after you make this once. So much better than any version you’ll find at a Chinese restaurant.

2 cups steamed broccoli florets, preferably from your local Chinese restaurant (ask them to keep them crunchy)

To make the sauce: Combine all the sauce ingredients in a medium skillet, bring the mixture to a boil over high heat, and cook, stirring occasionally, until it reduces by about half (to about 1 1/2 cups) and it’s just barely thick enough to coat the back of a metal spoon, about 10 minutes. Reserve 1/2 cup for the dish. The rest will keep in the fridge for up to 5 days or in the freezer for up to 3 months.

To make the dish: Combine the steak, egg white, cornstarch, and salt in a bowl and toss with your hands to coat the beef well. Heat the oil in a wide cast-iron skillet over high heat until the oil begins to smoke. Add the beef in one layer and cook without stirring until the bottoms of the pieces turn golden brown, about 1 minute. Flip the beef, add the red onion, scallion pieces, and dried chiles and cook, stirring occasionally until the beef is cooked to medium rare, about 2 minutes more. Transfer the contents of the skillet to a plate.

Pour 1/2 cup of the orange sauce into the skillet, let it boil, and cook, stirring occasionally, just until the sauce thickens to a syrupy texture. Dump the rib eye mixture into the sauce and stir until the sauce coats the beef, 15 to 30 seconds. Take the skillet off the heat, stir in the orange zest and scallion greens, and transfer the dish to a plate with the broccoli. Eat.

Note: Sometimes I rock charred orange wedges (slick them with oil and give them a few minutes in a hot skillet).

From “Asian-American” by Dale Talde with J.J. Goode 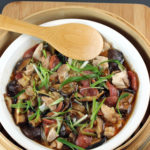 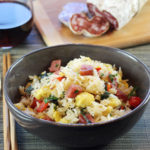 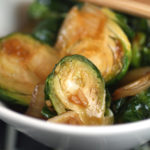 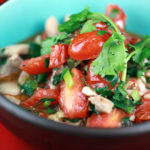