Nosrat calls these “a lazy woman’s canele,” after the classic French pastry with a deeply crisp, caramelized exterior and custardy interior that gets baked rather laboriously in a bee’s wax-lined copper mold.

I don’t think these brown-butter mochi develop quite the same intense burnt caramel flavor of the best caneles. But they are still irresistible, nevertheless. The flavor is more akin to a toasty brown sugar cookie. The edges get crisp, while the center remains tender and chewy. Surprisingly, these are not super sweet, either, which is another plus.

The recipe makes a lot — 24 mochi muffins. While they are best the day they are baked, they are still nearly as good after a couple of days. I added a note at the end of the recipe that they also can be frozen in a sealed container for at least a month. It’s like having a secret stash of joy to dig into again and again. Brown-butter mochi — in a perfect size to satisfy.

Generously grease two cupcake tins with butter, including the outer rims of each mold (this will ensure the cakes release after baking). Set aside.

Place butter in a medium saucepan, and set over medium heat. Cook, swirling, until the foam subsides and the butter turns golden brown and begins to smell nutty, about 4 minutes. Turn off heat, and add coconut and evaporated milks and sugar. Whisk until sugar and coconut milk melt. Transfer mixture to a medium bowl. Add eggs and vanilla, and whisk until smooth. Set aside.

In a large bowl, whisk together mochiko flour, baking powder and salt. Pour milk mixture into dry mixture, and whisk until smooth. Scoop a scant 1/2 cup of batter into each cupcake mold (enough to fill each mold just under the brim). Gently drop filled pans onto countertop from a height of 3 inches to release any air bubbles.

Bake for 55 to 60 minutes, rotating pans and switching their positions after 30 minutes or so to ensure even baking (decrease baking time by 10 minutes if using a nonstick dark metal tin). The mochi are done when they are butterscotch brown on top and an inserted skewer comes out mostly, but not completely, clean.

Lightly run a butter knife along the sides of each mold, then invert tins to release mochi, and cool on a wire rack for 10 to 15 minutes. Don’t worry if the cakes feel soft or underbaked when you pick them up — it’s just the nature of mochi.

Adapted from Samin Nosrat’s recipe in the New York Times 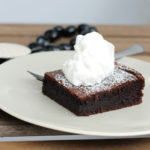 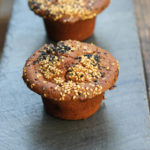 And: Mochi Muffins in Berkeley