All Hail: Syrian Kale and Carrot Salad with Shattered Dates Not your typical kale salad by any means.

Can you stand just one more kale salad recipe?

Oh come on, sure you can.

You know your love of this leafy green hasn’t waned even if you don’t want to admit it publicly.

Just embrace it. After all, in our society, how many times do we actually value something that’s crinkly and wrinkly, right? Ever more reason to never let go of this green beauty.

Especially when it’s showcased with a spectrum of flavor, texture and downright scrumptiousness in “Syrian Kale and Carrot Salad with Shattered Dates.”

This easy recipe is from “Seattle Cooks” (Figure 1), of which I received a review copy. Seattle food writer Julien Perry spotlights 40 of the city’s top restaurants with recipes and profile stories. Enjoy everything from “Fava Santorini” from Chef Zoi Antonitsas of Little Fish to “Shrimp and Shittake Pot Stickers with Riesling Dip” from Chefs Tom Douglas and Brock Johnson of Dahlia Lounge, and “Kalua Pork Belly with Korean Chimichurri” by Chef Rachel Yang of Revel.

Proprietor Chris Cvetkovich of Nue is the man behind this glorious salad. He had no professional cooking experience before opening this eclectic restaurant that might represent a dozen countries on its menu at one time. Each quarter, he hosts a One World Dinners series to celebrate the cuisines of under-represented countries, such as Syria, which is the inspiration for this salad.

It’s one of those salads with layers of big flavors that explode in your mouth. You never get tired of digging a fork into it. The kale is joined by crunchy almonds, sticky sweet dates, raw carrots, creamy briny feta and nigella seeds that give a subtle smoky, deep charred onion flavor.

The vinaigrette is equally bold — a blend of Dijon mustard, lime juice, olive oil, granulated garlic, cumin, and pomegranate molasses. There’s an underlying citrus tang to it with a big ka-pow of earthy, lemony cumin.

The recipe calls for blanching the sliced almonds, then toasting them. Since I bought sliced almonds that were already roasted, I skipped the blanching part, and just toasted them briefly in a saute pan on the stovetop.

The recipe also advises to freeze the dates for an hour to make them easier to cut. I think that’s a great tip if you buy dates that you need to pit yourself, as they tend to be quite sticky. However, I manage to buy pitless dates (hello, Whole Foods!) that were actually quite easy to slice as-is with a knife.

Whether you call it Tuscan, Italian, lacinato, dinosaur, cavolo nero or just plain ol’ kale, this salad will leave you loving it even more. With a mix of dates, almonds, feta and carrots, this kale salad hits all the high notes.

To make dressing: Combine all ingredients except the oil in a blender and mix well. With the blender running, gradually add the oil and blend until emulsified. Set aside.

Bring a small saucepan of water to a boil. Add almonds and blanch for 30 seconds. Drain and set aside to cool. Transfer almonds to a baking sheet, spread on a single layer, and toast for 3 to 4 minutes until golden brown. Set aside.

Transfer to a serving plate (or individual plates) and top with feta, almonds, and nigella seeds.

Note: Young kale works best for this salad. If the leaves are stiff, massage them with a bit of olive oil, a squeeze of lemon juice, and a pinch of salt. Not only does this tenderize the leaves, but it adds an extra burst of flavor to the dish.

From “Seattle Cooks” by Julien Perry 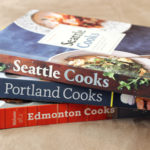 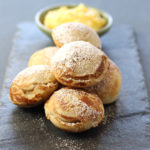 And A Recipe from “Seattle Cooks”: Aebleskivers with Lemon Curd