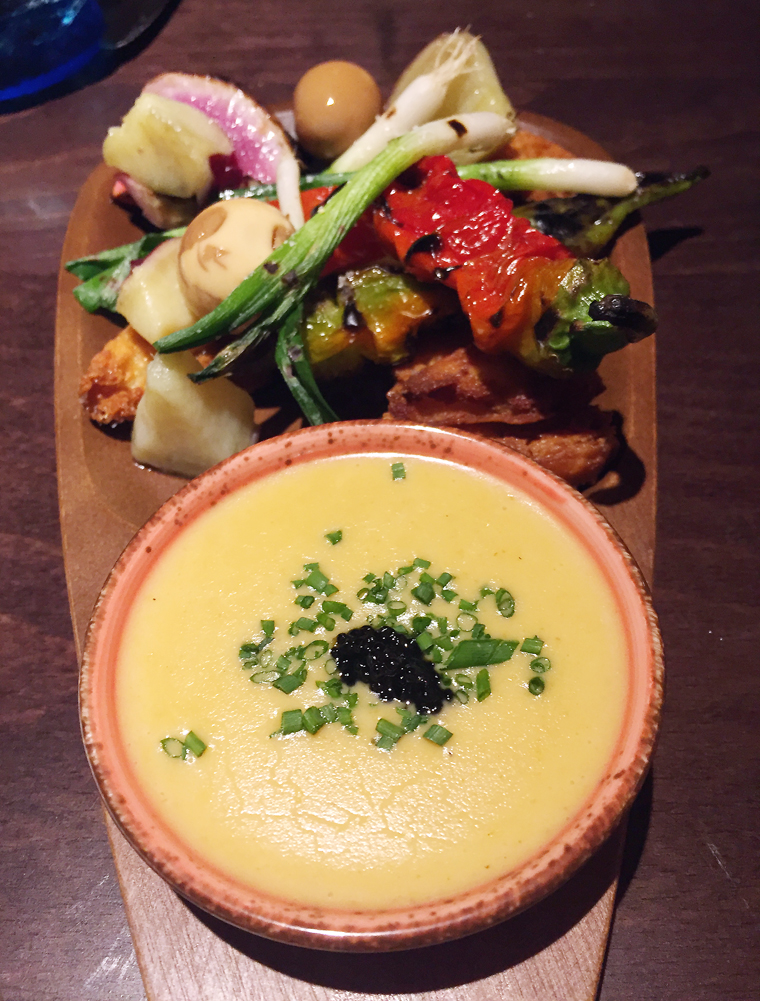 If you grew up watching “The Brady Bunch” (as I did) or lived in an Eichler-designed house (as I did), you know full well the timeless appeal of mid-century modernity.

That’s the aesthetic that Bardo Lounge & Supper Club in Oakland brings to life in a 21st century way.

Opened in October, this new restaurant looks to the past for inspiration, but interprets it in a cool new way going forward with global influences.

Owner Seth Bregman modeled it after the cocktail parties his parents threw in their Southern California home. In fact, the main floor lounge even features a vintage lamp and sofa that he hijacked from his parents’ living room.

You can enjoy a casual, a la carte menu in the lounge, while planted on that sofa or other ones. I always find it a little precarious to juggle drink and food while having to reach up and over to a coffee table. 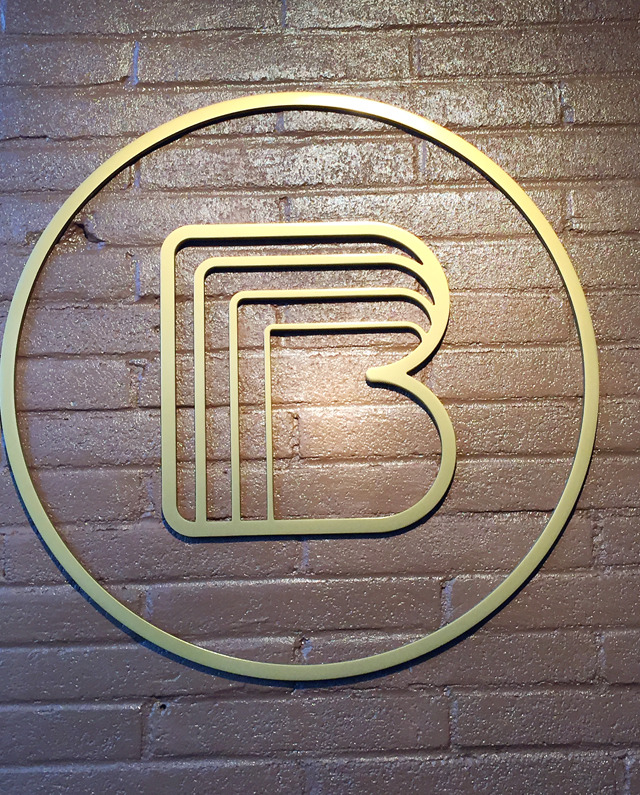 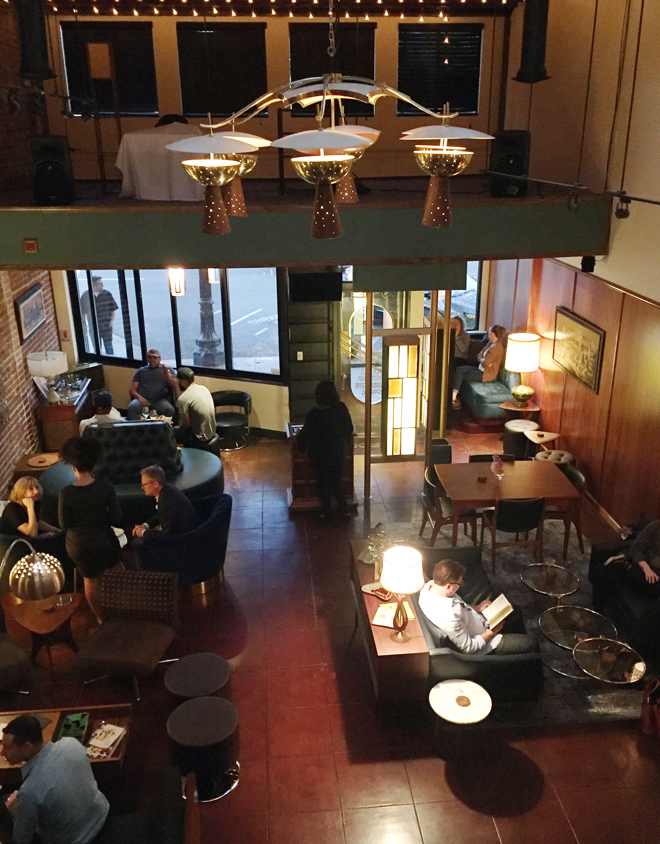 But you can always take the slightly more formal route upstairs, where a three-course, $59 per person prix fixe is served. It’s a quieter area, where you can still overlook the buzzy lounge area.

That’s what I did a few weeks ago when I enjoyed dinner there with my buddy Ben of FocusSnapEat. We paid our own tabs at the end. No matter where you sit, do order a cocktail. Bregman has been a noted bartender for years, and has enlisted some of the best mixologist friends as consultants. What’s more, all the drinks are served in vintage glasses that Bregman and his wife Jenni have collected over the years. If you fall in love with a particular glass, you can even buy it, too. 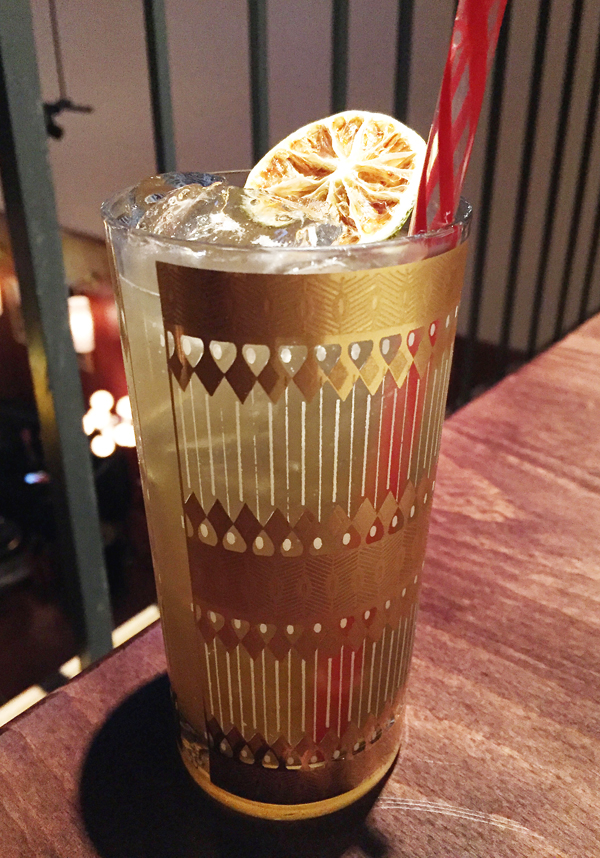 With my predilection for ginger, I couldn’t pass up the “Imperial Rule” ($10) served in a beautiful highball glass. A blend of vodka, lychee liqueur, ginger beer, lime juice and ginger ash simple syrup, it was full on gingery with a touch of perfumy fruitiness. In short, I could drink this every single day.

It’s the perfect accompaniment to the bowl of cheddar-porcini popcorn that gets brought to the table. I mean, what’s a house party without some popcorn, right? Popcorn to nibble on as you enjoy a cocktail.

Two chefs share the kitchen duties: Anthony Salguero and Brian Starkey, who met while working at the Michelin-starred Plumed Horse in Saratoga. And it’s rather amazing what they turn out in such a minuscule kitchen.

One look at the prix fixe menu and it’s clear they’ve done their homework on mid-century culinary touchstones.

There’s fondue alright, but this one is enlivened with uni. With the color of melted cheddar, it’s melty-gooey, garnished with caviar, and has a definite note of the sweet sea. There are quail eggs, long Jimmy Nardello peppers, radishes, grilled scallions, and fried chunks of bread to dip with. It’s a very clever riff on a dish that’s become all too trite. Ben’s cacio pepe demonstrated how this simple classic Italian pasta dish flavored with black pepper and cheese can rise to another level with foie gras and shavings of duck jerky. The supple pasta was made richer and had an iron-y depth because of the foie gras.

The chefs brought out a serving of the chilled chicken for us to taste. The ballotine slice was napped with a jerk vinaigrette, ginger and scallion, and was garnished with crisp, puffed wild rice. It reminded me a lot of Cantonese-style ginger-scallion chicken in taste, but the presentation was far more elegant. Before you get to the main course, there is an optional dish you can add for a supplemental $17: clams with “carrot bacon,” large enough to share, and definitely worth ordering. Instead of actual bacon, the clams get a smoky hit from carrots that have been seasoned and cured before smoked, leaving them tasting very much like bacon. It’s served with a tender round of puffy house-made kale-flavored roti.

And if you end up truly loving this dish, you’ll be able to recreate it at home next year, as the recipe will be featured in my forthcoming new cookbook, “East Bay Cooks,” which will debut September 2019. 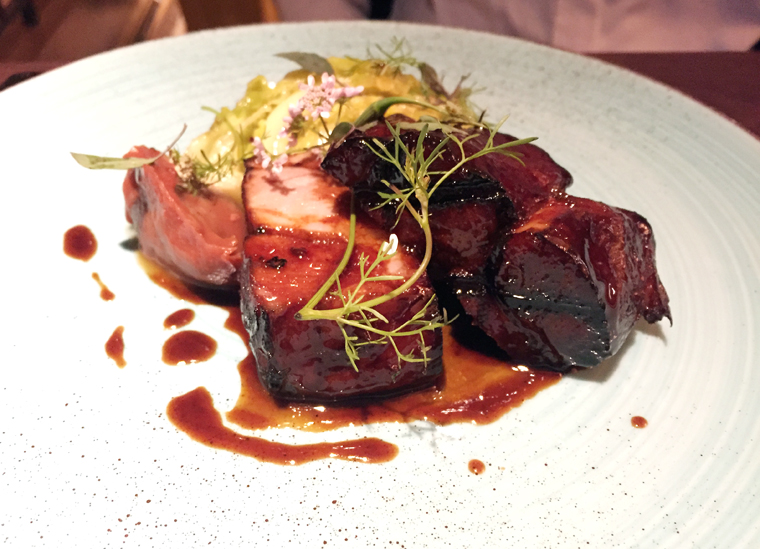 The main course of pork shoulder was cooked for 12-hours with fish sauce, dark soy sauce, and house-made lemongrass vinegar. Unlike most pork shoulder that is usually served shredded, this version eats almost like steak. It’s so tender, and gets a hit of sweet-heat from jalapeno-quince butter.

The skin on my local Monterey sea bass was crisp as a potato chip. It was presented over hummus made with fermented garlic and sunflower seeds that gave it a nutty, earthy and molasses-like taste. Four small bowls arrived with our entrees, a play on Korean banchan: grilled chicories; lacto-fermented garlic sunchokes; mashed celery root with smoked paprika; and walnuts, shallots and cornichons mixed with brown butter. The idea is to mix and match, and playfully accent your entree with each of them. A palate cleanser arrived next in a little glass finger bowl. I can’t say that the “orange creamsicle” intermezzo necessarily looked dazzling with tiny balls of frozen granita floating in a cloudy golden liquid. But it sure tasted refreshing. It was slightly fizzy, citrusy and danced on the taste buds.

For dessert, I couldn’t resist what was described as “Apple Jello with Cooler Whip.” The gelee was puckery with the taste of tart green apple. The “cooler whip” definitely tasted creamier and more substantial than the manufactured stuff. The surprise of vadouvan crumbs gave the whole thing a slightly savory and exotic curry taste. It might not be for everyone. But if you have an adventurous palate and an affinity for less-saccharine desserts, this is one to savor. Ben’s “Bananas Foster Semifreddo” had a more conventional taste with a deep banana-flavor, and a gooey torched marshmallow top with the bright hit of kaffir lime.

So many restaurants these days do “modern American.” But Bardo is that rarity that does so with a unique point of view. It’s a dinner party at which you want a standing invitation.