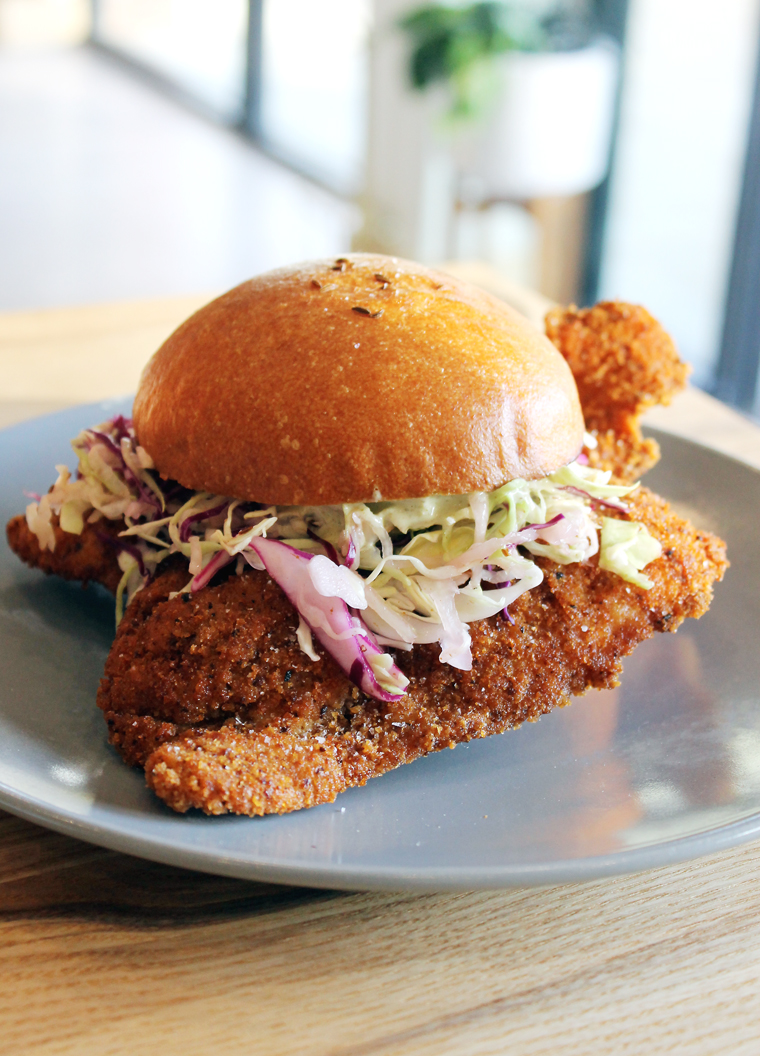 A two-fisted chicken schnitzel at the new Manresa Bread in Campbell.

If you already love the artisan loaves at Manresa Bread, then you are sure to go bonkers for the new downtown Campbell location that opened less than two weeks ago.

That’s because it features not only its already adored long-fermented loaves made with its freshly milled flours, but bread in so many other incarnations.

We’re talking chicken schnitzel breaded in the bakery’s own crumbs before being fried to a crisp and loaded into a fresh-baked bun with caper, mayo and house-fermented kraut.

Spaetzle made with a sourdough starter, and finished in a sauce of whey, butter and Pecorino.

And bone marrow matzo balls bobbing in bone broth, with the tender, moist dumplings actually made with levain bread crumbs. 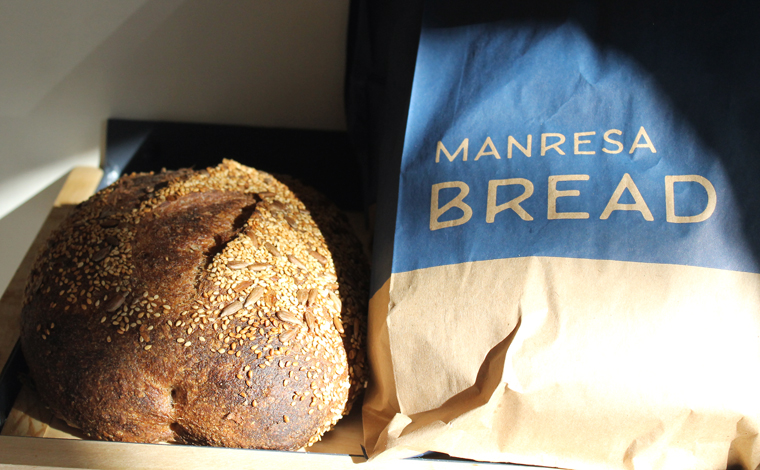 Shelves of bread where you help yourself to loaves. At 2,100 square feet, the Campbell locale is twice the size of the Los Gatos and Los Altos locations, enabling it to also operate much more like an all-day cafe, with hours from 7 a.m. to 8 p.m.

Most of the baking is still done at the commissary kitchen in Los Gatos, where all the flour is milled on site except for all-purpose and bread flours because they have to be sifted. Manresa Bread took possession of a new 48-inch mill stone earlier this year, which has allowed it to mill flour finer and faster. Next spring, it will hopefully acquire a new larger sifter, too. 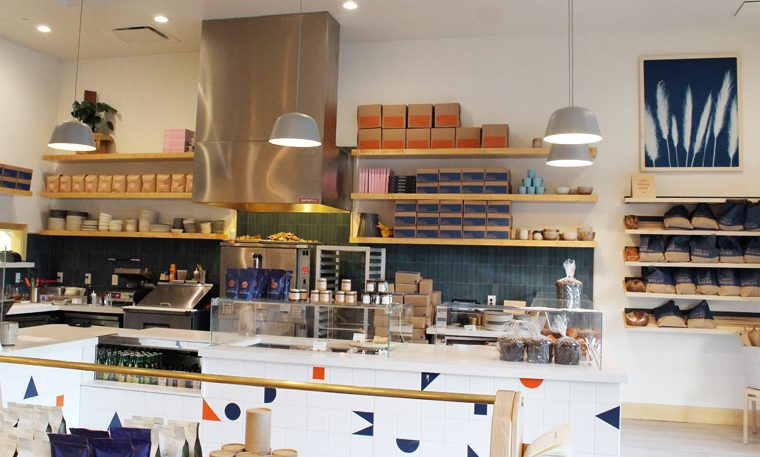 The new digs in downtown Campbell.

“The cafe is something we’ve always wanted to do,” says Avery Ruzicka, head baker and co-founder of Manresa Bread. “It’s taking things we are already making and thinking about what we want to eat on our bread. It’s all about making each bite balanced in flavors.” Todd Parker, former sous chef at David Kinch’s Michelin three-starred Manresa in Los Gatos, who has spent most of his career in fine-dining, heads up the kitchen here. He’ll also be the chef of Kinch’s new pizza-pasta restaurant, Mentone, expected to open spring 2019 in Aptos.

“I’ve gone from making things in pint-size containers to gallon-sized,” Parker says with a grin. “It’s like short-order cooking here but with fine-dining sensibilities.”

That definitely sums up the offerings here, as I found when I was invited in as a guest last week.

The airy space is done up in blonde wood tables with seating for 35, a large glass pastry case, shelves of bread, and an artful display of bread-related T-shirts, baseball caps and bags of Verve coffee to purchase. Beer, wine, kombucha, and market-driven seasonal cocktails also are offered.

“We had expectations that people would want healthier options, but so far the biggest seller is the bacon, egg and cheese sandwich,” Parker says with a laugh.

That sandwich, along with coconut-tapioca pearls-granola bowls, breakfast tacos on house-made tortillas, and biscuit sandwiches are available until 4 p.m. 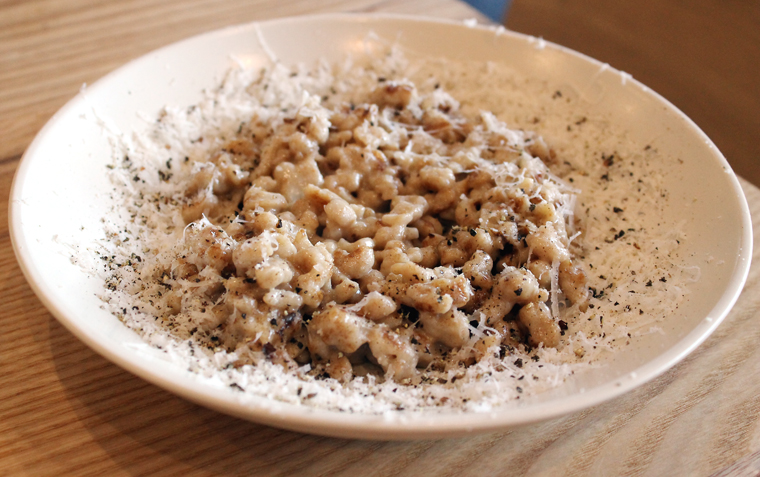 Spaetzel from the “After 4 p.m.” side of the menu. 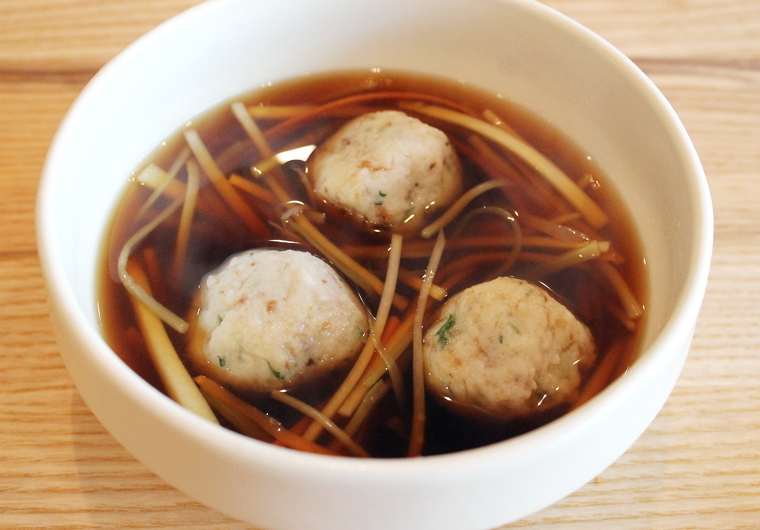 There’s also a section for “After 4 p.m.” That’s when you can go to town on items like the “Sourdough Spaetzle Cacio E Pepe” ($12) that is plenty cheesy and peppery with chewy little wavy spaetzle that possess a distinct bread-like taste.

After 4 p.m. is also when the beef, pork and chicken bone broth ($14) is available with julienned carrots and parsnips a la hot and sour soup. It’s restorative and rather indulgent with bone marrow matzo balls. I find that even the moistest and fluffiest of matzo balls typically have a mild taste. Not these. They have a long finish of burnished, long-fermented bread on the palate, which can’t help but make you sit up and take notice. 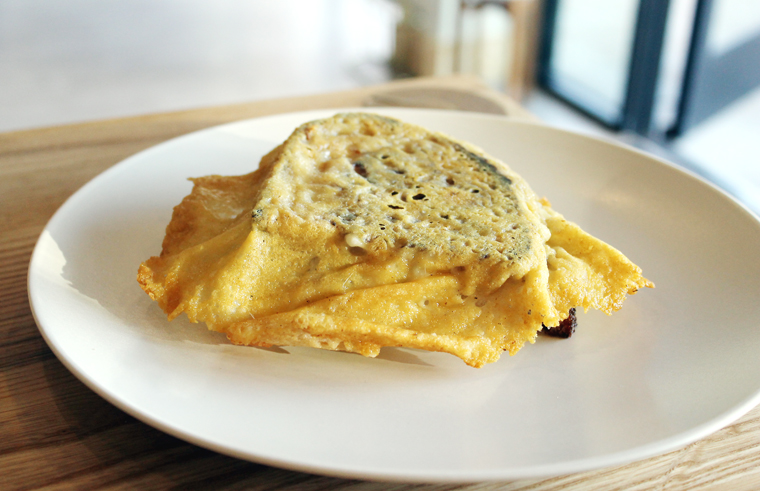 Once you have the Grilled Cheese ($12) here, you may just have to have it every time you visit. It is that glorious. It draws all eyes when it’s brought to the table, as the sandwich is covered in a protective blanket (or “veil” as Parker calls it) of crisp melted Taleggio, Gruyere and Robiola. Underneath is the sandwich with a center of more creamy cheese and pert pickles inside. This could easily be a gut-buster. But the tangy pickles add relief from all the cheesy richness, prepping your taste buds for bite after enjoyable bite until the whole thing vanishes and you wonder how you possibly ate the whole thing so fast.

The Chicken Schnitzel ($14) bulges out the sides of its bun. Again, the sauerkraut adds just enough sourness to balance the overall richness of this satisfying sandwich. The Little Gem Green Goddess ($9) is actually a nice companion to either of those sandwiches. It’s barely dressed with any creamy dressing, letting the freshness of the leaves be the focal point. The leaves get gilded with nutritional yeast, adding umami and an almost Parmesan-like taste.

Do make a point to save room for “Chocolate Spread Bread” ($8). This deceptively simple nosh is mind-blowing. It takes the French tradition of a dark chocolate bar atop a baguette slice and amps it up plenty. Imagine a tangy, hearty slice of country levain covered fancifully in thick squiggles of dark chocolate with a texture that’s a cross between pudding and ganache. Cocoa nibs and sea salt finish this completely vegan treat. You’ll finish every bite — lustily, with no regrets. “Chocolate Spread Bread” or my idea of heaven.

If you’re in need of more chocolate after that, you can pick up a chocolate-candied orange panettone ($42), now available for the holidays, from the bakery case.

Since Roy Shvartzapel, founder of the now-fabled From Roy $49 panettone, used to bake his specialty Italian domed sweet breads at Manresa Bread’s commissary kitchen before getting his own space, I was curious as to how Manresa’s compared to his, which I can’t get enough of.

For one thing, Manresa Bread’s panettone is $7 cheaper at $42.

Second, and not surprisingly, Manresa Bread’s is far more acidic tasting like a fine fermented bread. 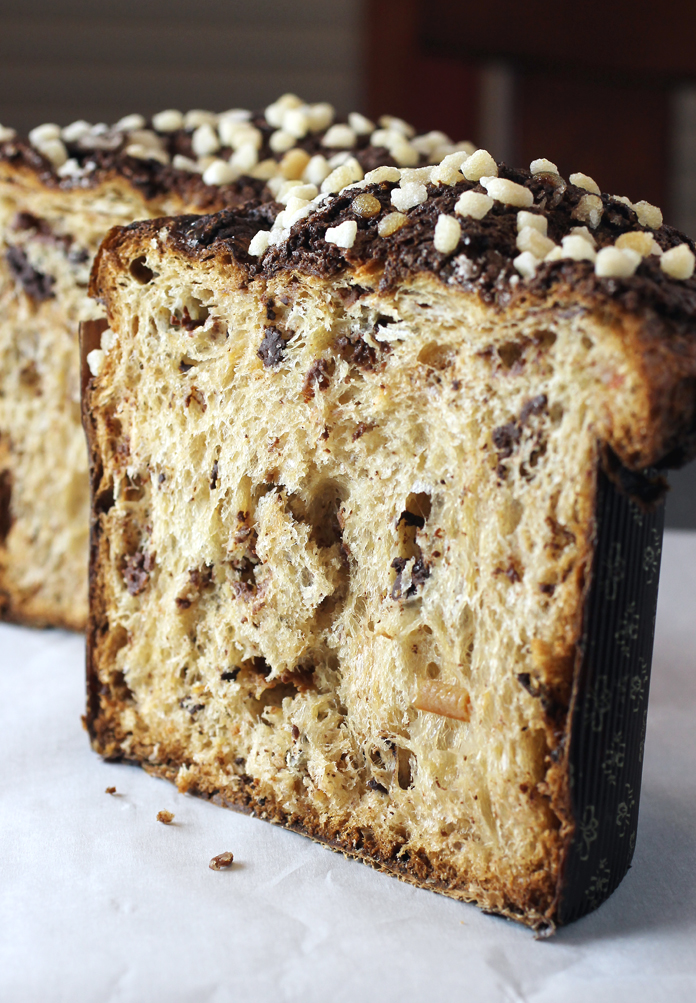 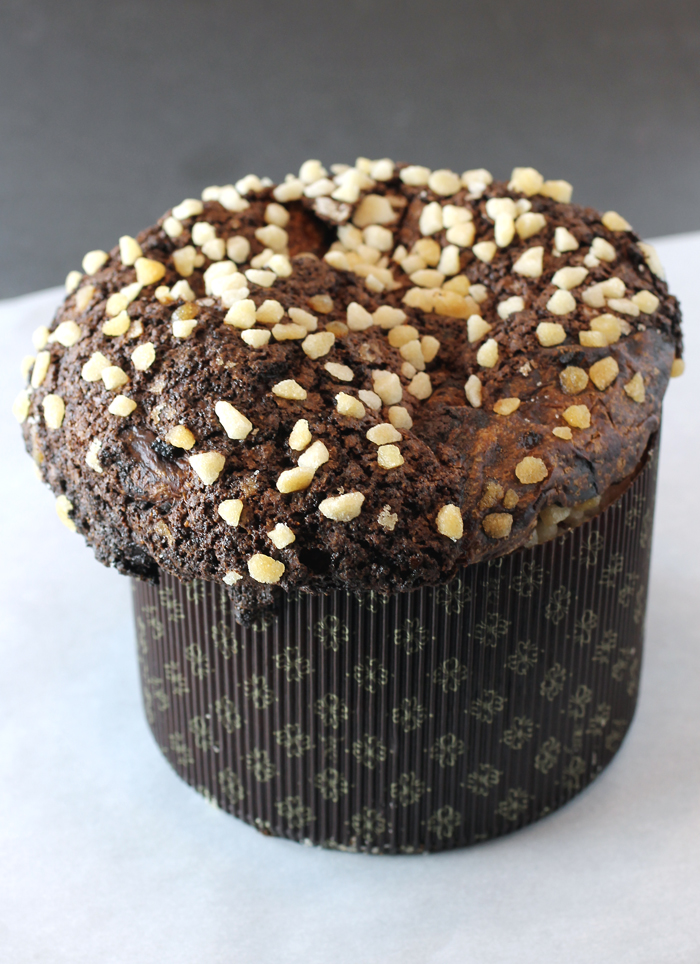 A great host/hostess gift or an ideal splurge for yourself.

From Roy’s is thoroughly indulgent. It is rich as can be, outrageously over the top with butter and sweetness.

Manresa Bread’s is plenty moist, but with a texture that’s less pastry-like and more bread-like instead. It’s also less sweet, despite being full of chocolate and candied orange rind. Its dome is burnished, too, with a wonderful almost canele-like caramelization to it.

I wouldn’t say that one panettone is necessarily superior to the other. They’re both delicious in their own way. It’s all in what you prefer.

Me? Well, I just plan to get my blissful fill of both this holiday season. 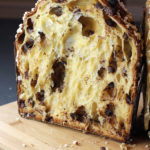 More: A Look at From Roy’s Panettone 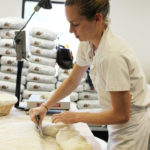 And: A Visit to Manresa Bread’s Baking Commisary