Prime Time For Prime Rib — At One Market Prime rib with all the fixings along with a nice glass of red wine at One Market.

Of course, House of Prime Rib in San Francisco has pretty much cornered the market on that regal cut of beef for decades, attracting hordes every night for its throwback table-side carving.

Who can blame them when prime rib holds such appeal? It’s a celebratory meat associated with Christmas and festive Sunday family get-togethers. It’s also a sizeable cut of meat that takes awhile to cook, meaning it’s not something you’re likely to prepare at home on the spur of the moment for just two of you.

My husband, aka Meat Boy, prepares prime rib for our extended family every Christmas. But even he was game to leave the cooking to someone else in May when we were invited to One Market as guests of the restaurant to try its rendition. The rotisserie turns the prime rib over the flames. 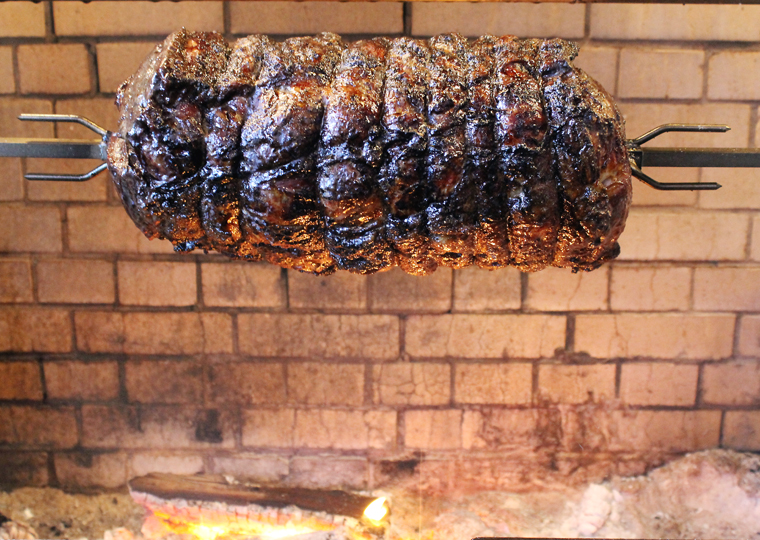 It gets wonderfully crisp all over.

The expansive restaurant is outfitted with a wood-fired burning rotisserie just in front of the open kitchen. You can walk up to it to get a close look at the chickens rotating on the spit along with a massive bone-in prime rib. There’s a limited supply each Friday and Saturday night. Once it’s gone, it’s gone.

Take a seat at the counter for a great vantage point of the open kitchen. Every so often, the exhaust fans will cycle through full force, giving off a powerful whoosh like a jet airplane. 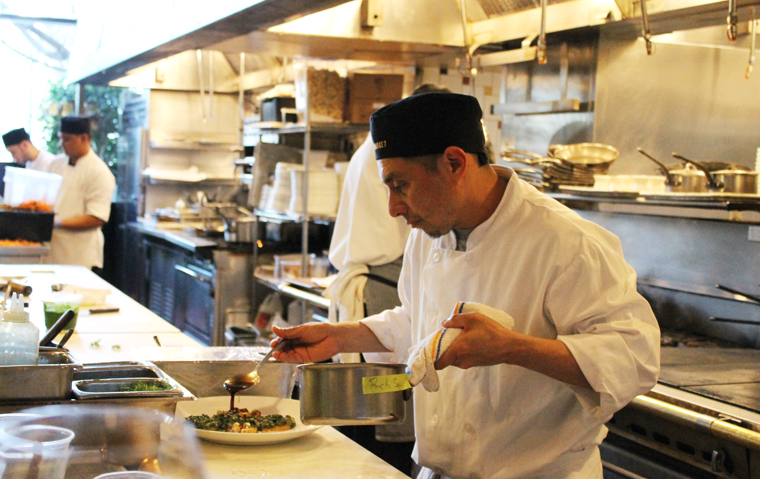 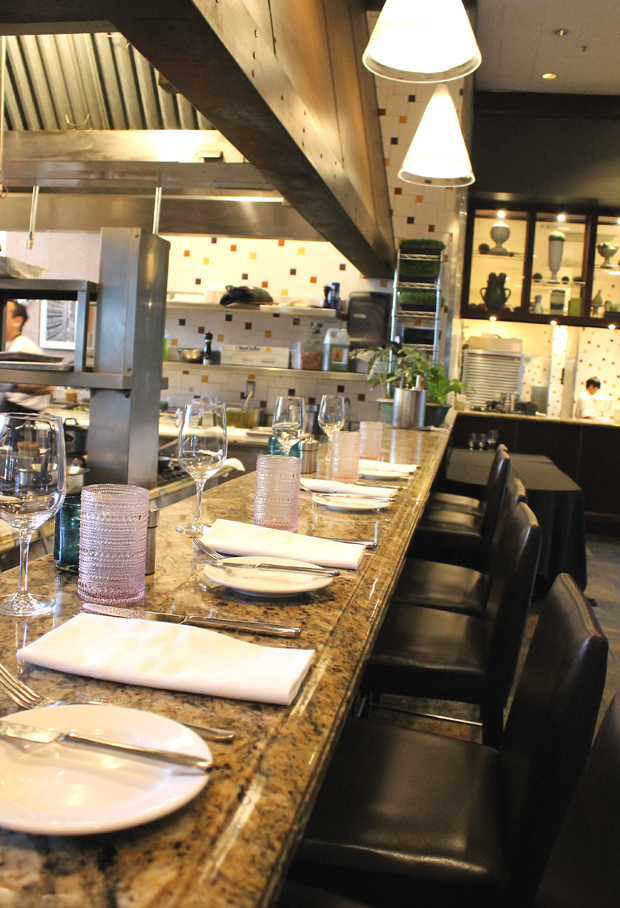 The prime rib dinner is fairly complete, so you don’t really need a starter. But we couldn’t resist the Hawaiian Kampachi tartare ($18.50), that’s beautifully arrayed on the plate with slivers of the clean-tasting yellowtail, creme fraiche, tiny pickled beech mushrooms, and smoked onion petals. Although Executive Chef Mark Dommen wasn’t there that night, his chef in charge also sent out an amuse of deviled egg with bacon, a sweet potato puff crowned with creme fraiche and caviar, a mushroom arancini as delightful as a tater tot, and a spoonful of halibut ceviche with tequila foam. There are two choices for the prime rib: a Market Street Cut ($47.95) and a Bone-In ($55.95). They both constitute large cuts, about 1 1/2-inch thick, with the bone-in, of course, being ever so heftier. You can choose the level of doneness you prefer, too. We went with medium-rare, choosing one of each of the two different types of cuts.

The prime rib dinner includes a wedge salad. Since we had a previous starter, we opted to share one wedge salad (which you can do, too, and the restaurant will adjust the price accordingly). Half a wedge salad was plenty, too. The crisp iceberg was cold, as it should be, and garnished with bacon, radishes, chives, and a rich dressing made with Point Reyes Original blue cheese. I don’t know about you, but I’ve had one too many wedge salads that were drowned in heavy dressing. Thankfully, this one showed more restraint. Half an order of the wedge salad.

The prime rib dinner also includes creamed spinach with good quality spinach, and heavenly mashed potatoes that taste of pure butter that you will have a hard time not devouring completely. There’s also house-made horseradish cream to gild the prime rib, and an airy popover with a crisp, burnished exterior. The sides, especially the potatoes, are incredible.

The beef has a fabulous crust to it, crisp, salty and irresistible, especially with the gush of a ring of fat just beyond. The meat is juicy, with a sweet minerality to it.

We ended up taking half of our meat home. When I asked the chef in charge that night if everyone who orders the prime rib dinner finishes it all. He said not usually, but that one guy ordered TWO prime rib dinners for himself, and ate every bit. 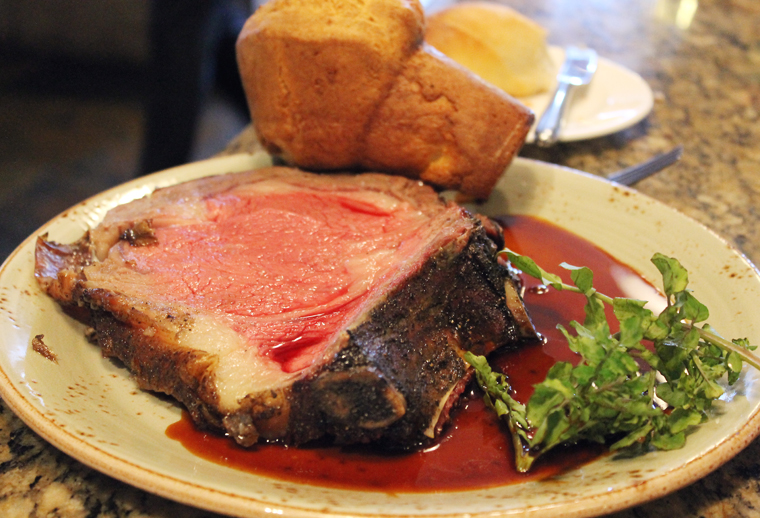 If you still have room, there’s always dessert (discounted to $4.95 each with the prime rib dinner, instead of the normal $7.50 price). And it’s always worth the calories at One Market, especially if you order the iconic “Bradley’s Butterscotch Pudding,” based on a recipe by founding chef Bradley Ogden’s mother. It’s always thick and dreamy, full of butterscotch flavor, and never disappoints. It’s served with a fluff of chantilly cream, and with a small melt-in-your-mouth pecan wedding cookie on the side. 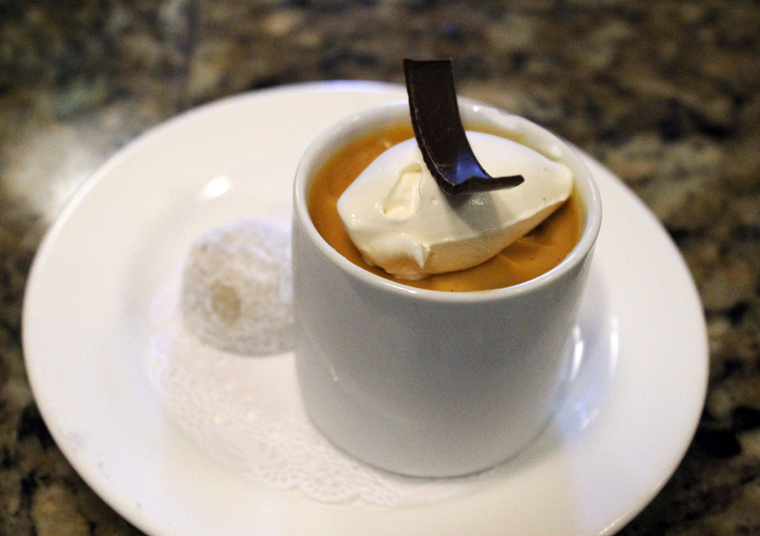 My favorite butterscotch pudding. I always have to have it here. 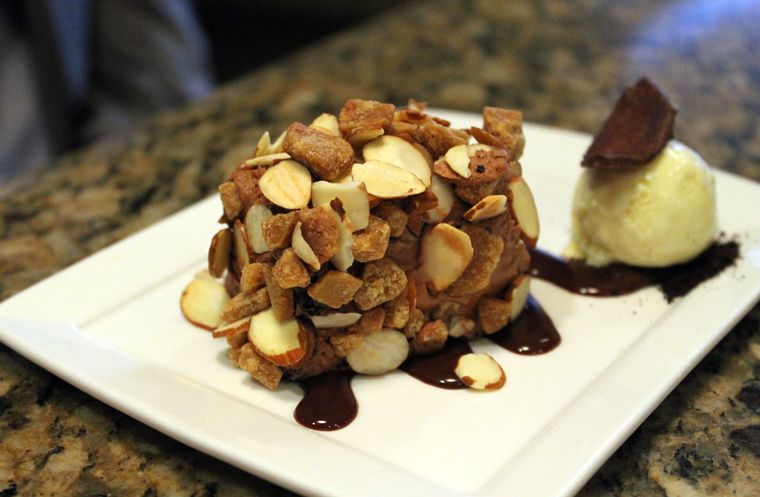 The chocolate toffee crunch cake that tastes of nostalgia.

The Chocolate Toffee Almond Crunch Cake is another winner. It looks like a giant Almond Roca and kind of tastes like one, too. The cylindrical chocolate mousse cake is covered in crunchy toffee bits and almonds.

The whole meal gave me that cheerful, warm, well-cared-for feeling that I get during the holidays — except I didn’t have to lift a finger to make it happen for once.