The ahi trio at the new Bosc & Bartlett.

The Santa Clara Marriott, a hop, skip and a jump away from Levi’s Stadium, is undergoing a massive $30 million-plus renovation that will be completed this fall.

Step inside and you’ll already notice big changes — from the new gift shop, redesigned lobby, updated guestrooms, and a new restaurant and bar.

Like Parcel 104, which takes its name for the land designation for the former pear orchard property, the new eatery’s name also pays homage to that fall favorite fruit. Walk toward the lobby and you can’t miss Bosc & Bartlett because it’s wide open with an expansive square-sided bar at its center that seats 32. High bar-height tables ring it. To the side is also more lounge-y seating with couches and tables, all done up in calming, sandy tones. The restaurant also now services a newly redone pool-side patio just out back.

I had the chance to check out the new concept recently, when I was invited in as a guest of Bosc & Bartlett. Even midweek, the place was hopping, with most of the seats filled with guys, either dressed in casual business attire or athletic wear (as visiting sports teams often stay at this hotel). There are six large-screen TVs in the bar area, making it a perfect place to catch up on the score of your favorite game.

It’s also open seven days a week from 11 a.m. to midnight, with a daily Happy Hour, noon to 4 p.m. with discounted beer, wine, and food. “Who’s the Bosc”? This cocktail is.

Hotel Executive Chef Jason Kina, a veteran of Oahu resort restaurants, brings a taste of the island to Santa Clara with a menu heavy on Asian influences. He even flies in tuna from Hawaii regularly. You can find him doing cooking demos every Monday at 5 p.m., too,  and doling out samples afterward.

Cocktails are definitely a new draw, given the well-stocked bar. The cute-named “Who’s the Bosc” ($15) plays to the pear theme with an easy-drinking blend of gin, lime, Santa Cruz Organic Pear juice, pear ice cubes, and a garnish of a dried pear slice.

Where there’s #smoke there’s this cocktail at @marriottsantaclara “El Smoky Viejo” It totally hit the spot on a day like today. With #mezcal #tequila #orangebitters and of course a whiff of smoke poured #tableside #drinkup #cocktail #bar #cheers #sipinthis #knockoneback #liquor #libations

The El Smoky Viejo ($17) is smoky, all right, not just in taste, but in show. The cocktail, a mix of tequila, mezcal, agave nectar, orange bitters, and dehydrated lime gets infused with real smoke. As the server pours it over ice at the table, wisps of smoke waft from the glass. The Ahi Trio ($21) features that aforementioned Hawaiian tuna three ways: island-style poke, tataki, and spicy tuna poke. The fish was definitely plump, supple and fresh. I’m more of a purist when it comes to poke, so I thought the squiggles of wasabi aioli and soy-sake unagi-like sweet sauce that covered everything was a bit excessive. With fish this good, why douse it in so much sauce, right?

The butterfish ($34) is one of the most popular entrees for good reason. The Alaskan black cod is a moist, succulent fish along the lines of Chilean seabass. Marinated in soy and yuzu, it was both delicate yet incredibly savory tasting. The old standby of wasabi mashed potatoes accompanied it. It may be a blast from Pacific Rim cooking of the past, but there’s no denying how irresistible it is. Spicy shrimp soba ($24) is a hefty bowl of stir-fried noodles accented with cabbage, green onions and plenty of jalapenos slices for a big jolt of spiciness.

For dessert, there’s a pear almond tart ($10) that’s served nicely warm, with the top bruleed to a sugary crackling crunch. Bosc & Bartlett definitely gives you the feeling as if you’re dining on vacation at a Hawaiian resort.

Parcel 104 may not have gotten a full face-lift in this renovation, but a living plant wall was added to the restaurant’s interior. And outside, right by its front doors, there’s a new chef’s garden exclusive to Parcel 104, complete with its own little sign. A still-green tomato from the garden.

The garden is quite compact, with just a few planter boxes. But Morales and Sanchez have made the most of the space, planting everything from a lemon tree to carrots, peas, tomatoes, and strawberries.

There’s a lot to explore at the revamped Marriott. 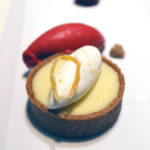