Mia Messier was a hotel and restaurant chef in Montreal when she decided to run away with the circus.

Not just any circus, but the worldwide phenomenon known as Cirque du Soleil.

Who can blame her?

Now a veteran of nine years with the Montreal-based entertainment company, Messier has traveled with various Cirque shows through more than 25 countries for anywhere from six weeks to a year and a half at a time.

It’s her job to feed the hungry troupe of 52 performers from 20 countries, along with 68 other crew members, while they’re on the road.

Recently, I had a chance to visit her cafe at Cirque’s “Totem” show, now playing in San Jose through April 15. I also got a quick peek backstage that afternoon with Cirque publicist Francis Jalbert, as crews were touching up the 2,700-pound turtle carapace that is the centerpiece of this particular show. Behind it, a hydraulic stage is flanked by what look like soaring, solid wood reeds. But would you believe they’re actually inflatable, so as to make transporting easier?

END_OF_DOCUMENT_TOKEN_TO_BE_REPLACED 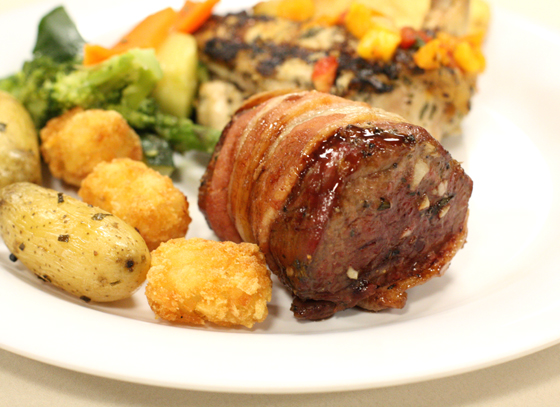 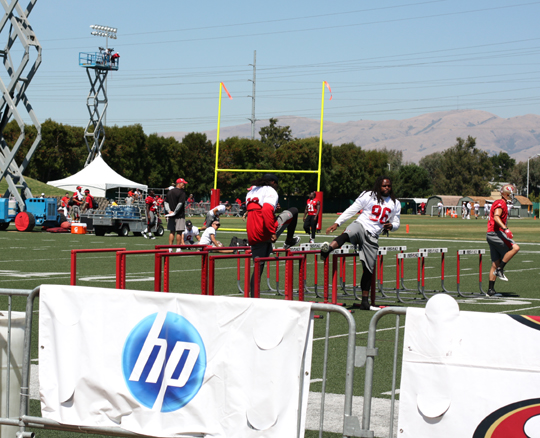 END_OF_DOCUMENT_TOKEN_TO_BE_REPLACED

Lunch at Lucasfilm in San Francisco 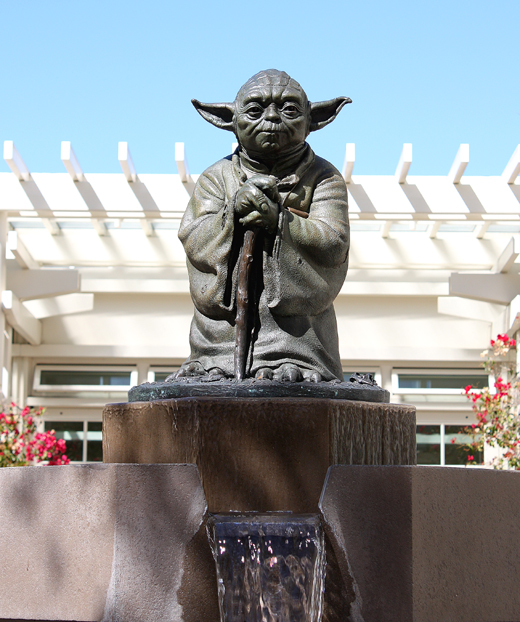 Last week, I dined with Yoda, ET and a Storm Trooper.

They and other iconic characters from mega-director George Lucas’ films were on hand in the form of models, statues and bobble heads when I was lucky enough to step foot inside the Lucasfilm Letterman Digital Arts Center in the magnificent Presidio in San Francisco to enjoy an al fresco lunch.

I say, fortunate, because the sprawling center — home to the special effects powerhouse, Industrial Light & Magic, and the video game producer, LucasArts — is not open for public tours.

Oh, sure, you can snap photos of the Yoda fountain at the entrance, and walk inside the lobby to see a life-size Darth Vader. But that’s as far as you can get unless you get an invitation to the Friday “Friends & Family” day each week. Yup, you have to know someone who works there to get an “in.”

That’s how I managed to get a peek inside last Friday, thanks to my friend Tami of the stylish blog, Fête à Fête, and her fiance, Gio, who is a model builder for Lucasfilm. How cool a job is that? Gio took time out from his busy schedule to show me around. 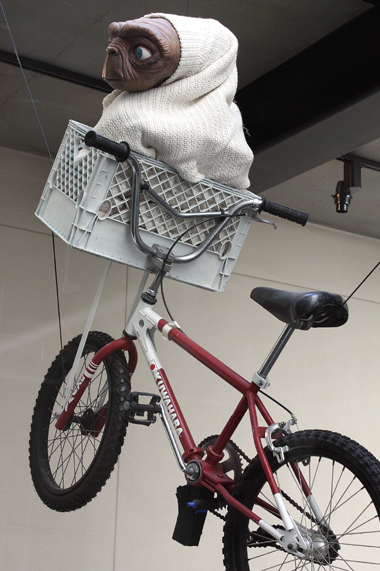 Like many Silicon Valley tech campuses, Lucasfilm has a gourmet cafe on site. But hands down, this one has got to have the most breathtaking view around. Replete with heavy-duty wood chairs and tables on open-air terraces, the Lucasfilm cafe is surrounded by floor-to-ceiling windows. On one side looms the landmark Golden Gate Bridge; on the other, the grand ornate dome of the Palace of Fine Arts that looks so enormous and near, you’d swear it must be a painting. Oh, but it’s not. 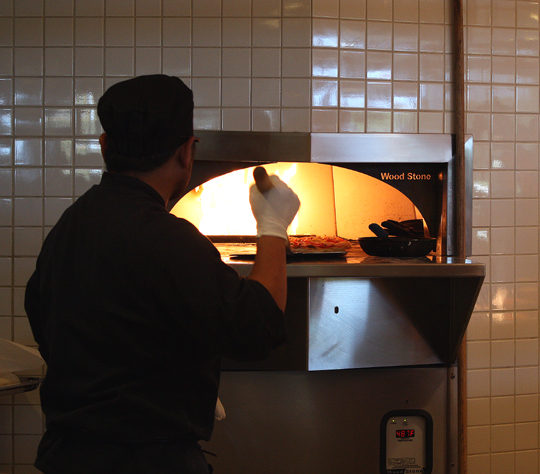 While Silicon Valley tech employees often get the perk of subsidized or free meals (Yes, Google, I’m talkin’ about you), at Lucasfilm, employees pay full price. But the quality is so high, not many seem to mind.

END_OF_DOCUMENT_TOKEN_TO_BE_REPLACED It’s some of the best tasting Chinese food around, made with organic vegetables, organic soy sauce and sustainable seafood. It’s available in unlimited quantities. And it’s all free.

But you can’t eat it — unless you work at Google’s Mountain View campus or know someone there who will invite you in as their guest.

That’s how the Food Gal got into Jia, the authentic Chinese cafe at Google, run by Executive Chef Olivia Wu.

Olivia and I go way back, to the days when she was a food writer at the San Francisco Chronicle and I was one at the San Jose Mercury News. 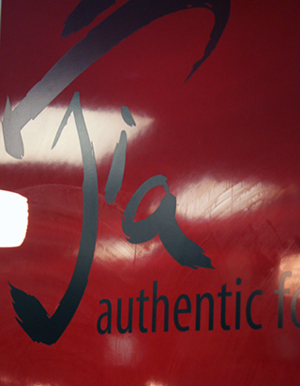 Two and a half years ago, with the newspaper industry already in dire straits, Olivia chucked her pen and notepad to put on a gleaming white chef’s coat instead at one of Google’s 16 campus cafes.

It wasn’t so far-fetched. After all, she’d already been a caterer and private chef, as well as mom to a son who is a cook at the well-regarded Publican in Chicago.

If you know anything about Olivia, you know she’s a stickler for authenticity and a perfectionist. I knew not to come to Jia, which means “family” and “home,” expecting chow mein and egg rolls.

Instead, what you’ll get is not Americanized, oily, gloppy Chinese food, but traditional dishes done up with primo ingredients, including an 11-grain rice blend made to her specification by Koda Farms. Sure, there’s a half dozen standard American dishes and sandwiches available at her cafe, but that’s not why employees trek from other campus buildings to take the time to eat here. It’s for Chinese food served the Chinese way. 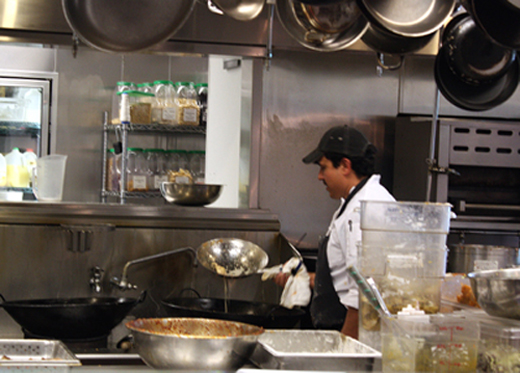 A three-wok station complete with cascading water was installed in the kitchen. The dining room was recently redone with a motif of colorful brush-stroke carps and decorative paper lanterns.  It also was reconfigured with more electrical outlets so that each table can accommodate an induction burner on days when Olivia offers the popular “hot pot” dining, where diners cook their food together in a bubbling pot of broth in the center of the table.

It’s one of her favorite ways to eat because it naturally brings people together to get to know one another better — not always an easy task in a large corporation.

END_OF_DOCUMENT_TOKEN_TO_BE_REPLACED 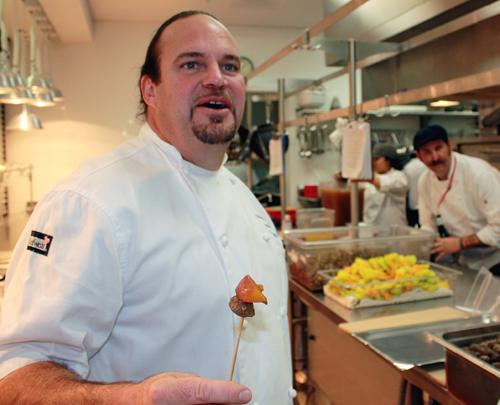 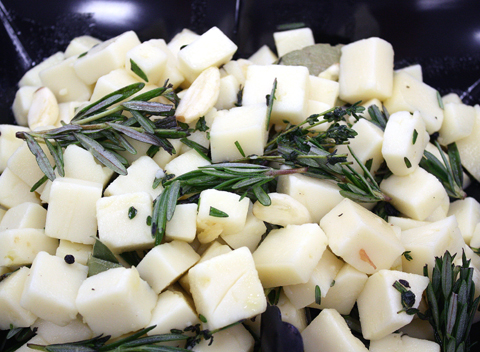 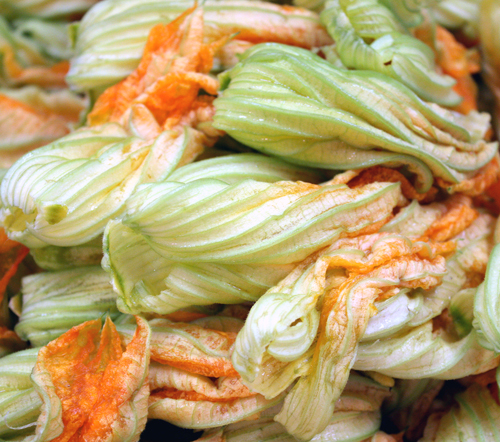