No doubt you know Anchor Steam for its bottles, barrels and kegs. Now, for the first time in its 122-year history, its flagship beer comes in cans.

The new cans are enough for two moderate drinkers to share or one thirsty person to enjoy more than a beer and a half.

It’s the same copper colored brew with malty, hoppy, deep caramel flavors that’s been made since Fritz Maytag acquired and revived the brand in 1965, making it the first hand-crafted beer to be brought back in the United States after Prohibition, launching today’s craft beer movement.

The tall distinctive gold cans with a big blue logo anchor retail for $2.49 each. Just in time for summer barbecues, picnics and camp-outs, the iconic beer is now easier to tote.

Hungry for A “Little Taste of San Francisco”?

If you are, then you’ll want to pick up a copy of the adorable and compact “A Little Taste of San Francisco” (Bluestreak Books) by Bay Area food writer Stephanie Rosenbaum Klassen. 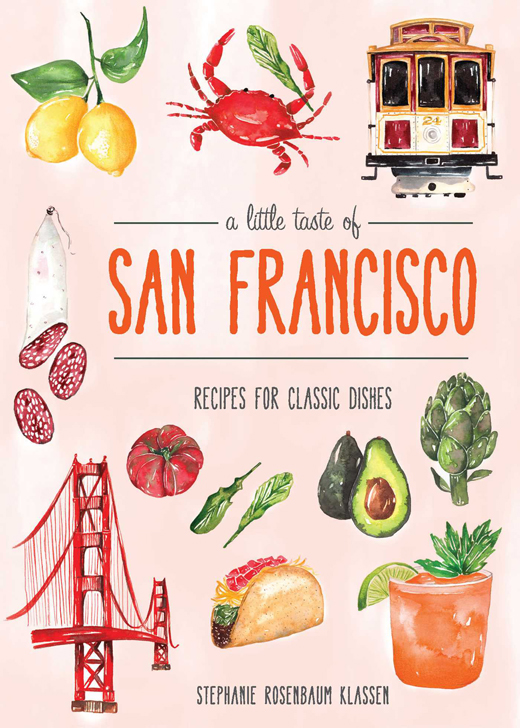 The 72-page book, of which I received a review copy, serves up more than 30 of the city’s quintessential recipes — from “Clam Chowder in A Sourdough Bread Bowl” and “Irish Coffee” to “Tofu Banh Mi” and “Oatmeal Cookie Ice Cream Sandwiches.”

END_OF_DOCUMENT_TOKEN_TO_BE_REPLACED Even though I was born in San Francisco and have spent almost my entire life in the Bay Area, I admit that when I was younger I took this region for granted.

I remember spending college summers interning in Portland, OR and Boston, where the moment I told people where I was from, their faces would light up with envy. The same happened when I lived in South Florida.

It took living away to make me finally appreciate what was in my own backyard. Namely, a climate that is almost always comfortable; spoil-you-rotten pristine produce available year-round; a food scene other cities would kill for; a gorgeous setting with ocean, mountains and redwoods; and an educated, curious, multi-ethnic populace so often at the forefront of meaningful issues and trends.

Of course, these days, it’s also a breathtakingly exorbitant place to live, with nightmare traffic on the freeways, construction everywhere, and an increasingly frightening divide between the haves and the have-nots.

For all of that, though, I can’t ever imagine leaving. It is home. And always will be.

Harry & David recognizes just how special the San Francisco Bay Area is. That’s why it chose this area as one to spotlight in its new regional gift baskets. The other foodie areas celebrated with their own themed gift baskets are: Chicago, New York and Austin.

For every regional gift basket purchased, 20 percent of net proceeds will be donated to food banks in those respective cities, including the SF-Marin Food Bank.

Entries, open only to those in the continental United States, will be accepted through midnight PST June 25. Winner will be announced June 27.

END_OF_DOCUMENT_TOKEN_TO_BE_REPLACED

Four Locally Made Host/Hostess Gifts for the Holidays The sugary butter cookies, which were first made in a small European bakery in 1898, are now made in Burlingame by Esther Buss, a former consumer marketing professional who’s been baking since she was a child.

I had a chance to sample the cookies, which are made with just cane sugar, flour, butter, sea salt and vanilla. They’re delicate and disintegrate in your mouth even more than your average meltaway cookies. Rolled in sugar, they are super sweet. A smidge of sea salt adds a refined touch.

Enjoy them with coffee, tea or even sparkling wine.

The cookies are available online, as well as at retailers including Lunardi’s, Mollie Stone’s and Draeger’s. They are priced at $9 for a package of 15 cookies; $25 for a large gift tub of 28 cookies; and $5 for a mini gift tub of five cookies.

Imagine the super concentrated fruity taste of pomegranates without having to ferret out all those plump seeds to enjoy it?

END_OF_DOCUMENT_TOKEN_TO_BE_REPLACED Recchiuti Confections actually makes that possible in the most decadent way.

The new chocolate box is in partnership with Creativity Explored, a Mission District non-profit that supports artists with developmental disabilities to help them create, sell and display their art. Two dollars from the sale of each $21 box goes to that organization.