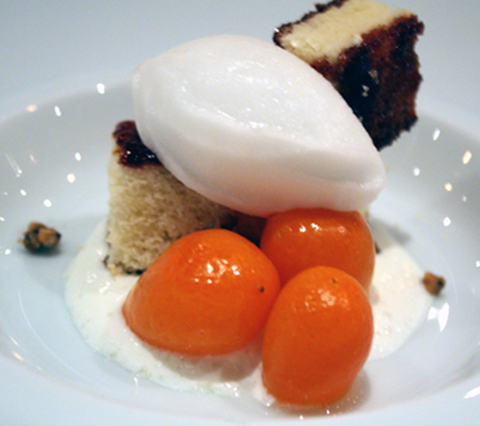 Times may be tough, but don’t tell that to Chef-Restaurateur Michael Mina.

Barely open a month, his new RN74 wine bar/restaurant in the new Millennium Tower in San Francisco is packing in the crowds.

On a recent Tuesday night, when I was invited to check out the scene for myself, a lively after-work crowd was enjoying wine and food at the bar. You know a place has got a vibe going when celeb Chef Todd English even drops by that evening to hang out at the bar with an attractive, dark-haired woman. 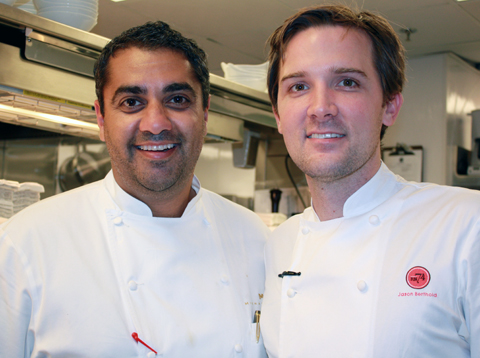 Transportation is a big theme in this new $4.5 million restaurant. First, the restaurant is on the ground floor of a new condominium tower right next to the old Transbay Terminal. Second, the restaurant is named after the highway that runs through Burgundy’s Cote d’Or. Lastly, the interior evokes an old train station reinvented in a hipper, more modern way.

Wine Director Rajat Parr has longed dreamed of opening a wine bar, one that would capture the feeling of magical discovery he encountered the first time traveling through Burgundy. Antique metal lanterns hang from the ceiling near the entrance. Bathrooms have piped in French conversations. 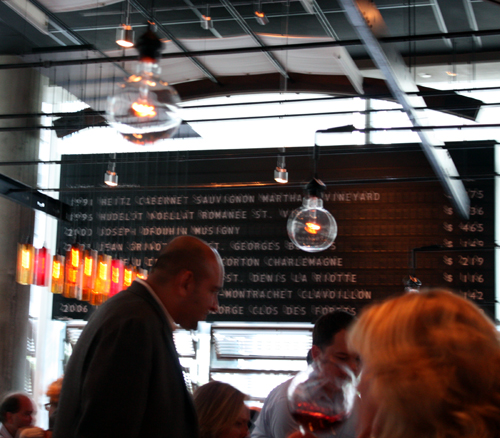 The centerpiece is a custom-made flip board like the ones you see at train stations that tell the arrival/departure times. Only this one lists wines where only one bottle remains in stock at the restaurant. If someone buys it, the board flips to erase the wine selection. How cool is that?

Executive Chef Jason Berthold is a perfect match for Parr. Berthold, who was sous chef at the French Laundry in Yountville and helped open Per Se in New York, also makes his own wine under the Courier label. Parr, who attended the Culinary Institute of America at Hyde Park, makes wine under his Parr Selection label.

His agnolotti ($16) are filled with a winning combination of polenta and mascarpone. Yes, soft, spoonable polenta snuggled inside a pasta wrapper, and served with chunks of globe artichokes, and delicate wild arugula leaves.

I would have never thought that flounder done carpaccio-style would somehow pair with cooked eggplant. But it’s an inspired duo with the textures being so similar. Charred scallions added a delightful smokiness. 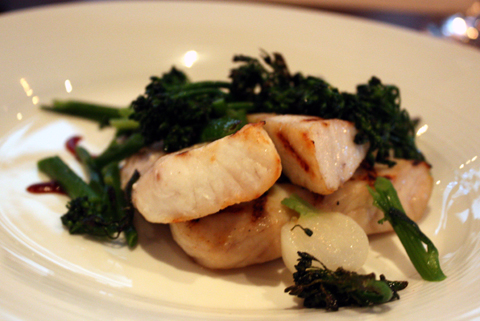 Grilled cobia ($27), with its meaty flesh, was strewn with chopped Marcona almonds and a syrupy sour cherry-Nicoise olive sauce that I wish there had been more of than just the one scarce quiggle at the bottom of the plate. 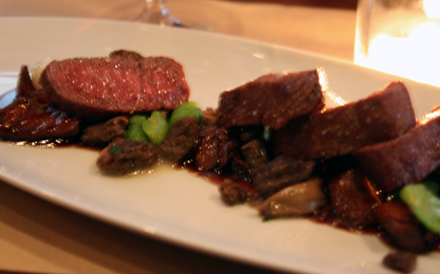 For dessert, we shared Chocolate Delice ($9), an irresistible cylinder of chocolate ganache with a hidden center of caramel garnished with roasted bananas, and brown butter-cashew ice cream; and Kumquat Confiture ($9), a refreshing mix of tiny toasted squares of coriander sponge cake strewn with candied kumquats alongside yogurt and white verjus sorbet.

I have to say I fell for the house RN74 Pinot Noir “‘Hirsch,”  Sonoma Coast 2007 ($15 a glass). Smooth, velvety, with deep raspberry notes and a backbone of earth, it’s an easy-drinking wine with a soothing nature.

Unfortunately, it’s not available at any wine shops, but only at RN74. So if you want a sip, you’ll just have to venture out to RN74 for it.