Glam Dining For A Little Less: Lunch at Michael Mina in San Francisco 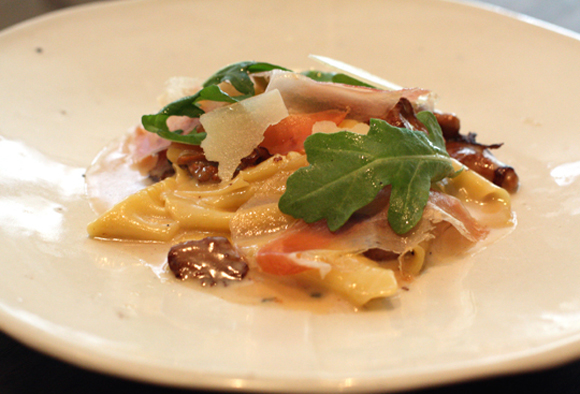 I’ve always fantasized about what it must be like to be one of those ladies who lunch.

I’d be decked out in my smart little Chanel suit, carrying a Gump’s shopping bag in one arm and an obscenely expensive handbag in the other. I’d meet my dear friend, Bitsy, for a most civilized lunch on a weekday. It would last for hours and include many elegant courses at a serene table set with proper silverware and crystal glasses. The waitstaff would be attentive to every need yet unobtrusive. And the food would be thoroughly graceful and refined.

Minus the high-end wardrobe and the socialite-friend, I actually had such an experience recently. At Michael Mina in San Francisco. For lunch.

Dinner at this glam, high-end establishment may get all the buzz. But you’ll fork over $115 per person for the tasting menu in the evening.

At lunch, though, you can indulge in three courses for $49 or four courses for $59 in the dining room. Or for even more of a bargain and a quicker nosh, enjoy the a la carte menu at the bar.

Lunch at Michael Mina has gone through a few incarnations since it started up earlier this summer. It started out only served in the bar area. But then, expanded into part of the dining room. Now, 15 tables are devoted to lunch service. It’s purposely limited in scope so that the waitstaff can still maintain a high level of service even at an hour when most folks are accustomed to grabbing food on the go. Because only a portion of the dining room is used, it also makes for a quieter environment, where you can actually converse in measured tones with your dining companions, whether it be for business or for pleasure.

When I was invited to be a guest of the restaurant to try out the new lunch service, I chose the four-course option with each course having at least two different dishes to choose from. 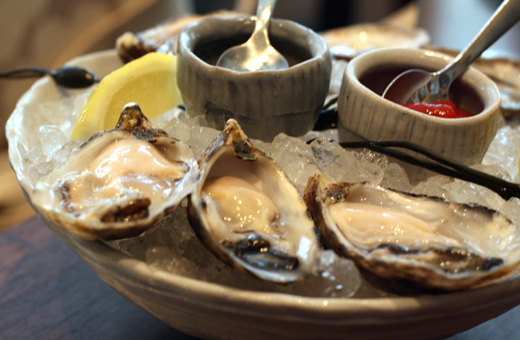 Two housemade, non-alcoholic beverages also are available, including a fun and zingy “Pacquiao Punch” ($5), named for the world-champion Filipino boxer and made with pineapple and Filipino calamansi lime.

For my starter, I had oysters on the half shell. Six oysters of three different varieties, all bracing and sweet of the sea, arrived on ice with traditional horseradish-cocktail and classic mignonette sauces. I was amazed at the portion size, having expected maybe half that many. But lunch here is not dainty that way. The courses are all substantial.

Next, a dish that positively had my eyes rolling back in my head — even if that might not be the most lady-like thing to do. But if hand-rolled garganelli is on the menu, don’t pass it up.  Silky, delicate pasta is tossed with prosciutto, arugula, Pecorino and a decadent chanterelle cream sauce. You don’t think immediately of pasta when you think of Michael Mina. But this dish will have you wishing the celeb chef’s next venture will be a full-fledged pasta trattoria. 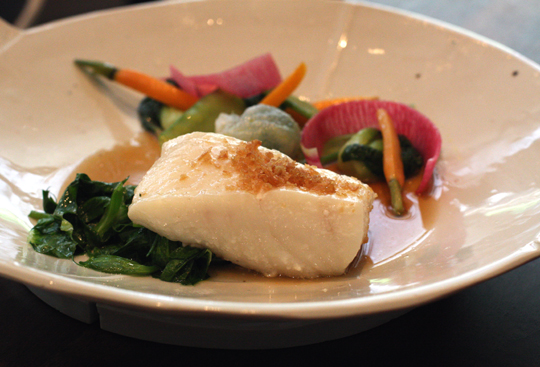 For my main course, I chose ginger poached halibut. It was one of the best renditions of halibut I’ve had. The fish is brined in white soy sauce for 10 minutes, then poached in olive oil, leaving it supple and moist. A dashi broth accompanies it, along with a plump and nicely thin-skinned dumpling filled with mustard greens. The crowning touch is the sprinkle of toasted panko crumbs on top of the halibut mixed with bits of sweet-hot candied ginger. Addicting. 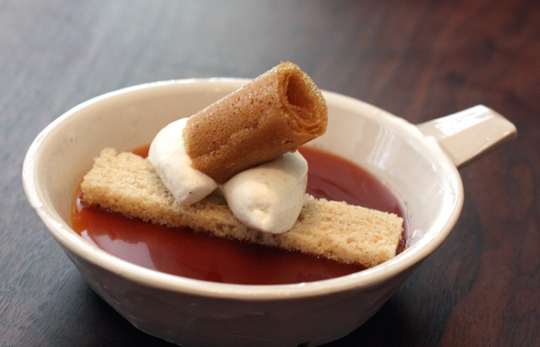 Dessert offers four choices, including a sensational butterscotch custard. A crisp brown sugar wafer and a fluff of chantilly cream garnished it. There also was a tiny slab of pan d’epices cake decorating the top, which might have been superfluous. After all, when you’ve also got a dreamy float of caramel-like butterscotch covering the top of the custard that’s made from real Macallan scotch, you almost don’t need anything else to gild it. The scotch is a genius touch, elevating what could be a rather homey dessert into an unforgettably sophisticated one instead.

Around me, business men in sharp suits dined. Lunch, 11:30 a.m. to 2 p.m., is also proving popular among other diners who like to eat a late, languid lunch on Friday afternoons to usher in the start of an early weekend.

Ladies who lunch sure know how to do it right. 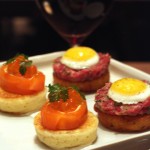 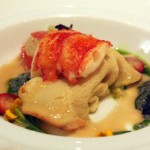 And: My Dinner at Michael Mina’s Bourbon Steak 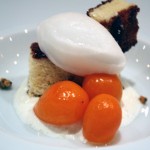 And: My Dinner at Michael Mina’s RN74