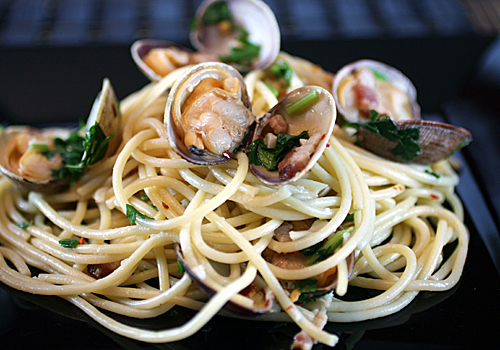 This is what results when you find yourself with 2 pounds of fresh clams, a craving for pasta, and some already opened containers of booze lying around.

Although my husband, Meat Boy, loves to grill and roast big hunks of meat — hence the nickname — he also loves making seafood pasta. I know, I know. One has nothing to do with the other. But that’s just him. And you got to love a guy for his contradictions, don’t you?

He found a recipe online. But it called for chorizo. We had none, and didn’t want to make an extra trip to the grocery store, so we used bacon instead, along with a liberal amount of red pepper flakes.

The recipe also called for white wine. We didn’t feel like opening a bottle that night just for this dish, so we decided to use a mix of vodka and absinthe instead. After all, I still had a quite full bottle of St. George Spirits Absinthe Verte, and it did add such a nice touch to the Manhattan Bay Scallop Chowder I made this past winter. So why not give it a go in pasta?

Shallots might be nice, but we only had green onions on hand. Fennel fronds also would have made for a lovely garnish to play off the anise-flavor of the absinthe. Since we only had parsley in the produce drawer, we went with that.

Meat Boy — or should I call him Clam Boy in this case? — dished up the warm pasta, his stomach growling, and his heart full of pride. I should have made him take a bow right then and there because this improvised pasta proved a knockout performance. Simple yet elegant, with tangles of noodles hiding bits of smoky bacon, and plump, sweet clams with a hit of spiciness. The absinthe was subtle, but there, lending a certain complex herbal je ne sais quoi.

My hubby anointed the dish with this name. And he swears he wasn’t the least bit tipsy when he did.

Put a large pot of salted water on the stove to boil for the pasta.

In a large saute pan, cook bacon on medium heat until crisp. Add garlic and stir until golden. Deglaze pan with vodka and absinthe.

Add linguine to pot of boiling water, and cook till al dente.

Add clams to the saute pan of bacon. Cover pan, and cook for 3 to 4 minutes on medium heat until clam shells open; give the pan a stir half-way through the cooking time.

Add green onions and red pepper flakes to clam mixture. Then, mix in hot linguini. If the mixture appears too dry, add a little of the pasta cooking water. Stir in parsley, and serve.