A Daring Pairing with Clam Udon After all, he was only the eighth American — and the youngest ever at the time — to pass the rigorous Master Sommelier certification back in 1987.

Now, he wants you to know your wine, too — particularly the more daring varietals.

After all, we probably are way too accustomed to reaching for Chardonnay and Cabarnet Sauvignon. But when’s the last time you had the nerve to uncork an Albariño, Tempranillo, Carmenere or Touriga Nacional?

In his newest book, “Daring Pairings” (University of California Press), Goldstein spotlights 36 edgy varietals to get to know. Then, he assigned one of them to each of 36 chef friends to come up with a homecook-friendly dish.

With the chilly, drizzly weather of late, I decided to try making “Steamed Manila Clams with Udon” from Larry Tse of The House in San Francisco. The dish is paired with Albariño, a medium-bodied, crisp, dry white with plenty of citrusy acid.

An easy dashi stock is made with dried kelp, instant dashi granules, soy sauce, leek and dried bonito flakes. Udon noodles are cooked in boiling water till toothsome. And fresh clams — one of the most sustainable seafood around — are cooked until their shells open.

The recipe calls for cooking the clams in a separate pot from the stock, then to discard the clam cooking liquid. But if I make this again, I think I will just add the clams to the pot of stock to cook, put a lid on, and let it all simmer gently until the shells open. That way, you end up keeping all those lovely briny clam juices in the broth.

The recipe also calls for removing the clams from the shell before serving. But I kind of like the rustic look of the whole clams instead. 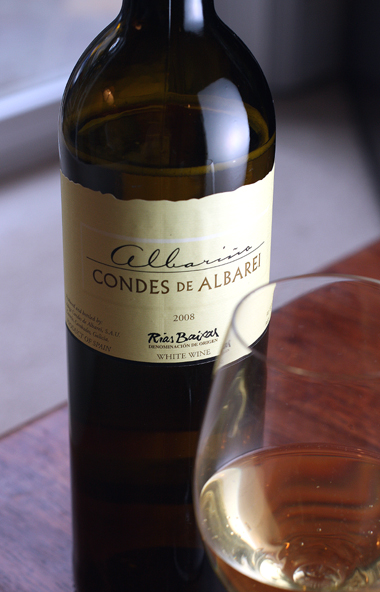 Goldstein recommends a variety of producers for each varietal highlighted. I managed to find a bottle of one of them, the Condes de Albarei Albariño, at my local BevMo for $15.99. When I uncorked the bottle, I found a surprise: The still wine was actually a little fizzy, which apparently is not that uncommon for this varietal. It’s just a sign of unspent carbon dioxide left over from the fermentation process.

The spritely wine with notes of lemon paired well with the clams and provided a bright contrast to the umami-rich broth.

Among the other pairings in the book are a Carignan with “Warm Kabocha Squash Salad with Dandelion, Bacon, Roncal, and Pecans” by Suzanne Goin of Lucques in Los Angeles; Cinsaut with “Duck Basteeya” by Mourad Lahlou of Aziza in San Francisco; and Muscat with “Almond Cake witih a Warm Red Berry-Vanilla Compote” by Emily Luchetti of Farallon and Waterbar, both in San Francisco.

There was only one chef allowed to choose his/her own grape variety. Of course that was, Joyce Goldstein, Evan’s mom, who called dibs on Aglianico, a complex Italian red, to showcase her “Lasagna with Neapolitan Ragu.”

For rest of dish:

To make the broth: In a saucepan, bring water to just below a boil. Remove from heat. Lightly wipe the kombu with a clean cloth (you don’t need to wipe away the white film), and add to the hot water along with the hon dashi granules and soy sauce. Let stand 30 minutes to rehydrate kombu. Return pan to medium-high heat, add leek, and bring to a boil. Reduce heat to low and simmer gently for 15 minutes. Remove from heat, add katsuobushi, and let steep for 15 minutes. Strain broth through a fine-mesh sieve into a clean pan. Taste and adjust with salt (it may not need any).

Cook udon noodles according to package directions, drain, and reserve.

To cook clams: Bring broth to a boil, add clams, cover, and turn down to barely a simmer. Cook clams just until they open,  about 3 minutes. Remove from heat and stir in mushrooms.

To serve: Divide noodles evenly among individual serving bowls. Ladle broth, clams and mushrooms over the noodles. Garnish with chives and nori, and serve at once.

Adapted from a recipe by Larry Tsu, as published in “Daring Pairings’’ by Evan Goldstein 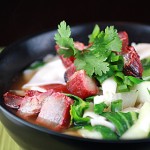 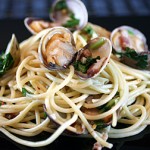