A Profusion of Pears and Spices 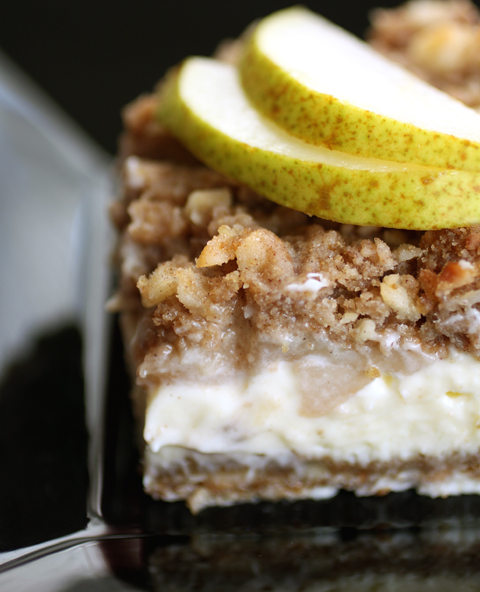 They’re potent with ground ginger, cloves, cinnamon and coriander — a whole teaspoon of each. Whoa!

The fact that they’re so spice-heavy shouldn’t come as a surprise — not when the recipe comes from a cookbook with the name, “The Spice Kitchen, Everyday Cooking with Organic Spices” (Andrews McMeel) by Sara Engram and Katie Luber with Kimberly Toque. Engram and Luber have their own line of spices. And Toque was an assistant test kitchen chef at Lawry’s.

My friends who sampled the bars found the amount of spice overwhelming. I didn’t mind the pronounced flavor, except that it did make it very hard to actually taste the pears in these treats.

Next time, I think I would cut the amount of spice in half, which is how I’ve adapted the recipe below. Feel free to cut the spice amounts even more if you prefer.

The bars have a great interplay of textures — a crisp, nutty cookie foundation, then an almost cheesecake-like middle, followed by slices of fresh pears, and a quite sweet, thick layer of crunchy streusel on the very top. The flavor is reminiscent of a heady pear spice cake in a whole different guise.

After baking, the bars are refrigerated for at least three hours to firm up. Although you might be tempted to eat them out of hand, they’re a little messy that way, so don’t by shy about bringing out the plates and forks.

Preheat oven to 350 degrees and grease an 8-inch square or round baking pan. To make crust, cream butter and sugar in a medium bowl until light and fluffy. Gradually beat in flour, ginger and cloves. Stir in macadamia nuts. Press crust mixture into bottom of the pan and bake for 15 minutes.

To make streusel topping, combine flour, brown sugar, cinnamon, and coriander in a small bowl. Cut in the butter with a pastry blender or two knives until butter is evenly distributed in the flour mixture and the mixture is crumbly. Stir in macadamia nuts. Evenly sprinkle streusel topping over the pears. Bake the bars for 25 to 30 minutes. Allow bars to cool and then refrigerate for at least 3 hours before cutting and serving.

Adapted from a recipe published in “The Spice Kitchen, Everyday Cooking with Organic Spices” 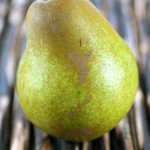