A friend of mine once rolled her eyes at her then-boyfriend for ordering poached pears for dessert at a restaurant.

In her mind, she couldn’t fathom why one would waste perfectly good dessert calories on simple, cooked pears, of all things.

I can see her point. After all, if you’re going to venture out to a white-tablecloth restaurant for dinner, you want to live it up. You want to eat with abandon, and finish it off with decadence. You want chocolate. You want butter. You want fluffs of cream, ganache and mousse — preferably in a take-your-breath-away form.

But transfer them to the finale of a comforting, home-cooked dinner, and I think even my friend would have a hard time passing them up.

Juicy, sweet, wine-y pears fanned out across a rustic tart that’s put out in the center of the table is just the type of dessert made for entertaining at home.

That’s what you’ll get with “Rosemary Pear Pie” from the new cookbook, “Home Baked” (Abrams), of which I received a review copy. It’s by Yvette Van Boven, a food stylist and recipe writer in Amsterdam. The book is filled with more than 150 recipes for sweet and savory goodies such as “Poppy Seed Popovers,” “Verbena Cake with Fresh Fruit & Verbena Gin Syrup,” and “My Favorite Chili with A Thousand Beans, Chorizo, Chocolate, and Corn Bread.”

One glance at this pear pie in the book and I was enthralled. Who wouldn’t be with the pears arranged just so prettily atop a simple, smooth, custardy filling?

The pears get poached in white wine, lemon, honey and fresh rosemary. When used judiciously, rosemary in so wonderful in desserts, adding a forest-y note and a subtle savoriness that tempers sweetness. You can even garnish the baked pie with a final little flourish of chopped fresh rosemary, if you like.

I used Bosc pears because they keep their shape so well. You’ll likely end up with leftover poaching liquid. Don’t toss it. It’s wonderful stirred into a cups of hot tea for days to come.

The pie is actually gluten-free, too, because the crust is made with almond flour. To be honest, this was not my favorite crust. After baking, it’s a tad grainy and crumbly, whereas, I think I’d prefer a more traditional crisp, shortbread-type or flaky, pie-type crust instead. Still, if you can’t tolerate gluten, this makes for a good alternative.

The only changes I made to the recipe was to include a suggested type of pear, and to recommend that you cool the poaching liquid slightly before mixing it into the beaten eggs, so you don’t end up with a scramble.

The pie is not very sweet, which makes it work well for a not-so-sugary breakfast treat, too.

Some folks may pass on poached pears at a restaurant. But at home, they are definitely worthy. Enjoy a slab with creme fraiche or even Stilton cheese.

3 pears, peeled and halved, with the stem (such as Bosc)

3/4 cup plus 1 tablespoon good-quality honey (or less, if you prefer a less sweet pie)

Begin by making the dough as described in the recipe below. Refrigerate it.

Core the pears using a sharp knife (or a melon ball scoop.) Heat the wine with the pears, honey, rosemary, and lemon zest over medium heat. Bring to a boil and let simmer over low heat for 30 minutes.

Use a skimmer to scoop the pears from the syrup and let them cool on a plate, leaving the syrup in the pan to reduce some more. After reducing it, you should have about 1 cup of syrup left, but it doesn’t matter if there’s a little more than that.

Meanwhile, grease an 8 1/2-by-11–inch tart pan with coconut oil (or butter) and press the dough into the pan, evenly dispersing it. Prick the bottom with a fork and neatly trim the edges of the dough. Line with a large sheet of parchment paper and fill with baking beans or dried beans. Blind bake the pie crust for 15 minutes. Then remove the parchment paper and the beans and bake for another 5 minutes. Allow the pie crust to cool a little.

Remove the syrup from the heat and strain it over a measuring cup, and allow to cool to about room temperature. You need 1 cup. Slice the pears up to just below their stem (so they stay together) and carefully arrange them in a fan shape in the prebaked pie crust. Beat the eggs in a bowl and pour in 3/4 cup plus 1 tablespoon of the cooled pear syrup. Pour the egg-pear syrup mixture over the pear-covered pie and place the pie back into the hot oven for 25 minutes. If you feel the edges are getting too dark, cover them with aluminum foil.

Briefly allow the pie to cool, and serve it with some creme fraiche, sour cream, or some crumbled Stilton cheese, if you like.

Generous 2 1/2 cups almond flour, plus some extra, if needed

Quickly combine everything (as you would when making regular shortcrust dough) into a firm ball. This can be done by hand or in a stand mixer. If the dough is too wet, add some more almond flour. The dough shouldn’t be sticky to the touch, but it should form a firm ball if you press everything together. Shape into a ball, wrap in plastic, and leave in the fridge for at least 30 minutes before using it. 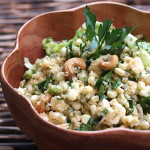 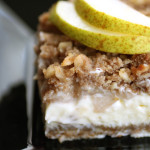 And Another Pear Recipe to Try: Pear Cream Cheese Bars with Macadamia Crust