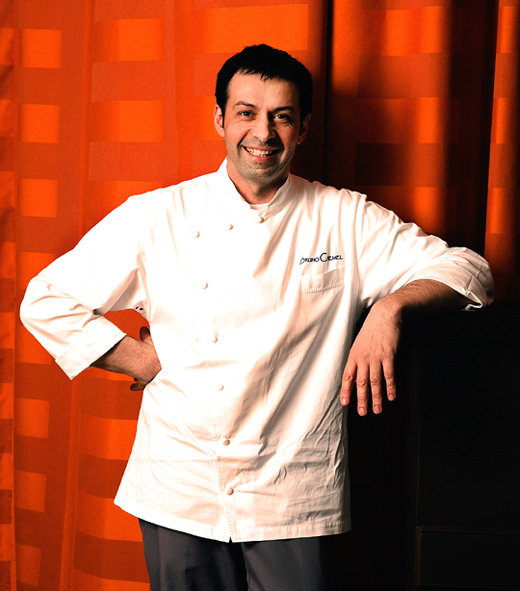 Such was the case when Chef Bruno Chemel departed Mountain View’s venerable Chez TJ in December. In a battle played out in the press, Chez TJ Proprietor George Aviet expressed his displeasure that Chemel had not brought Michelin two-star fame to his establishment like his predecessor Chef Christopher Kostow, now at the Restaurant at Meadowood in St. Helena, had. During his less than two years at Chez TJ, Chemel had garnered one Michelin star.

When they couldn’t see eye to eye on that chase for the star (s), Chemel left to open his own restaurant, Baume in Palo Alto, in January. Meantime, Aviet hired Scott Nishiyama, who worked at Daniel Boulud in New York and at the French Laundry in Yountville.

Named after 18th –century French chemist, Antoine Baume, Chemel’s new restaurant is a Zen-like oasis for his brand of elegant molecular gastronomy cooking. The intimate 22-seat restaurant is done up in warm dark chocolate and burnt orange hues, and accented with artsy glass panes covered in Japanese dried seaweed. It serves only tasting menus -– five courses ($78), 10 courses ($108), and 15 courses for ($148) at dinner; and a three-course lunch for $48 offered on Monday, Thursday and Friday.

Last week when I visited, the 41-year-old Chemel proudly showed off his new freeze-drying machine that had just been delivered. It can freeze anything -– from a sauce to any vegetable -– in a flash. Inside his kitchen, you’ll find such molecular gastronomy staples as a dehydrator and canisters of liquid nitrogen, as well as more personal touches such as a framed cotton dish towel from his days working with the legendary Joel Robuchon.

I sat down to chat with Chemel about the Chez TJ incident, and the hopes he has for his new restaurant.

Q: Of course, I have to ask about Chez TJ. Are you satisfied with the way things ended?

Q: Your pastry chef at Chez TJ, Ryan Shelton, followed you here. Did all of the Chez TJ staff leave with you?

A: When I gave notice, the staff gave notice. I told them that they shouldn’t, but they wanted to come with me. So, most of the staff did leave with me. 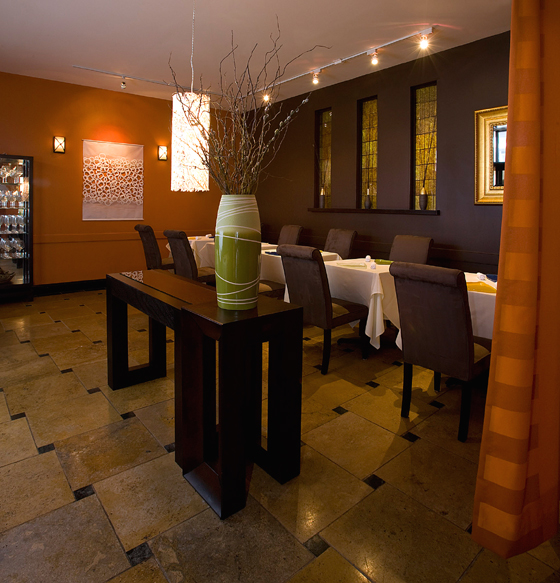 Q: Is your cooking different here than at Chez TJ?

A: When you are happy, it shows on the plate. The dining room is more inviting; people smile more. We work with liquid nitrogen here; I didn’t do that there.

I’m glad I can work for myself. The food follows the same principles, but it can evolve faster here because I’m my own boss.

Q: Why name the restaurant after a chemist?

A: I had the name in mind for 10 years. Plus, Antoine is the name of my son, too. Baume is French, it’s easy to pronounce and it’s catchy. A Baume scale, which measures the density of liquids, is a precise instrument still used today. It reflects how I’m using old techniques to cook. I still sear on iron, even though I do sous vide (cooking food in a vacuum-sealed bag at low, precise temperatures in a water bath). It’s a regular kitchen, but with some new, fun toys.

Q: Why did you pick Palo Alto to open your restaurant?

Palo Alto has a lot of restaurants, but not like what we are doing. I was a little scared at first to be honest. But since we opened, everyone has embraced us.

Q: Is it more challenging to open a prix fixe-only restaurant in an economy like this?

A: No, I don’t think so. In the 1980s, I cooked in France when the economy was bad, but we were still booked 90 days in advance. Here, we’re booked every night (Baume is open Thursday through Sunday for dinner). I was not expecting that.

Q: Obviously, you are a firm believer that molecular gastronomy is here to stay, that it’s not a fad?

A: I was a teacher of sous vide cooking with Robuchon 20 years ago. It saves time, and it saves sweat during service because you can do things in advance.

Q: But you don’t cook that way at home?

Q: What kind of food do you like to eat when you’re not at your restaurant?

A: Japanese. I go to Red Crane in Cupertino. The chef comes here often for dinner, too.

Q: What chefs do you most admire?

A: David Kinch (of Manresa in Los Gatos) – I admire him a lot. He works a lot and he respects people. He’s a very humble guy and a very nice person.

Q: What do you think of Ferran Adria, the chef who put molecular gastronomy on the map, announcing that he will be closing his landmark restaurant, El Bulli in Spain?

A: He does what he needs to do. He might be tired or want to branch out. It is his own decision. I respect whatever he does.

A: I’m looking to open another Baume, maybe out of state or out of the country. And there may be a cookbook. But I can’t say a lot about that yet.

Q: With Baume, will you be gunning for one or two Michelin stars here? Or does it even matter to you?

A: I’m working for my customer here. I’m shooting for nothing. I believe you just need to work your ass off every day, and whatever comes, comes.