A Visit to the Philo Apple Farm You might not know Sally and Don Schmitt by name. But you know of them by their legacy.

They were the original owners of the French Laundry in Yountville. They transformed what was once variously a bar, laundry, brothel, then run-down rooming house into a destination restaurant with a prix fixe menu even back then that attracted wide acclaim and visits from the likes of Julia Child and Marion Cunningham. Opened in 1978, Don was the maitre d’ and Sally was the cook, serving up five French-comfort-style courses that topped out at $46 per person. 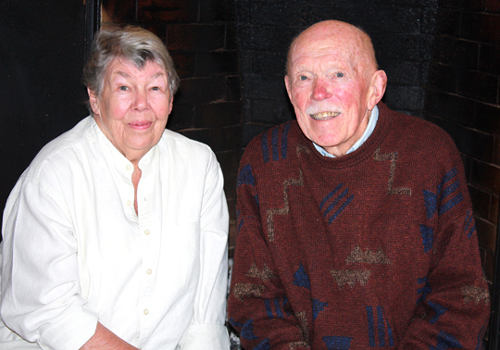 In 1994, after a number of restaurateurs eyed the property with interest, the couple decided to take the chance to sell it to a then down-on-his-luck, young chef named Thomas Keller.

As Sally deadpans now, “That turned out pretty well, didn’t it?” 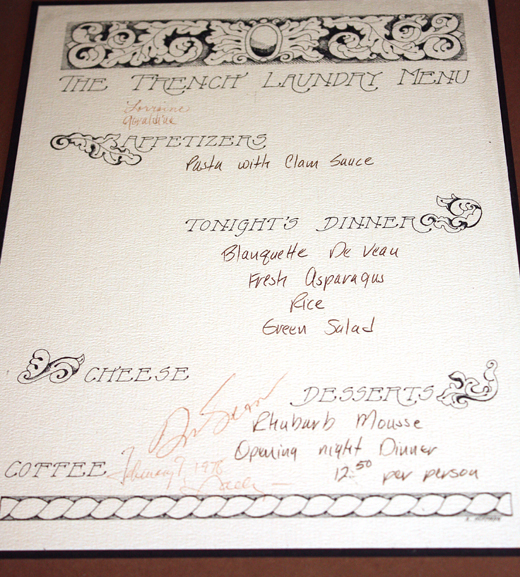 Sally, 79, and Don, 81 have a gift for seeing the potential in things most folks would turn their backs on.

After selling the French Laundry, they went on to refurbish yet another run-down property — a 30-acre swath in Philo in Mendocino County near the Navarro River. They turned what was once a decrepit sharecroppers farm into a thriving biodynamic farm specializing in heirloom apples. The Philo Apple Farm is so picturesque now that it’s a favorite setting for retailer Pottery Barn to do its catalog shoots.

On a drizzly fall day recently, I had a chance to tour the charming farm with its chickens, horses and 9o-year-old trees. It’s now run by one of the Schmitt’s daughters, Karen, and her husband, Tim Bates. 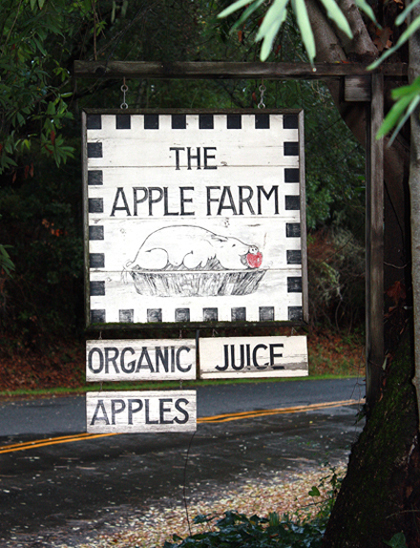 Don and Sally, who are now retired, still visit the farm regularly. They gave me a tour of the property, where 80 varieties of apples grow with names like Ashmead’s Kernal, Esopus Spitzenburg, Pink Pearl and Roxbury Russett. 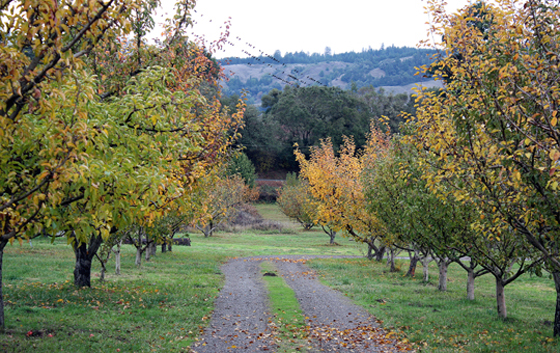 As Don explains, Sebastopol is Gravenstein country; and Philo is Golden Delicious land. Over the years, of course, Golden Delicious has gotten a bad rap as the bimbo of apples — all looks, no substance.  Standard supermarket ones are usually kept in cold storage so long that they lose flavor and turn mushy. But the Golden Delicious at the Philo Farm are picked ripe. The crisp air also results in thinner skins. They have crunch and a delicate perfume. To distinguish them from run-of-the-mill Golden Delicious, the Schmitts call them, “Philo Golds” instead. They’re the apples that you’ll find gracing the tarte tatin at Bouchon Bistro in Yountville, too. 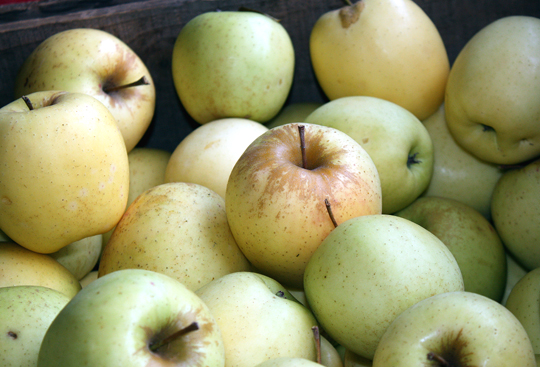 The Philo Farm apples are all picked by hand, packed by hand, and never waxed. They are sold locally in Mendocino County and in San Francisco, including the Saturday farmers market at the Ferry Building.

The apples also form the basis of other products made at the farm in small batches, including bottled apple juice, apple cider vinegar, apple balsamic vinegar and apple-quince chutney.

“I didn’t care for apple juice till I came here,” says Don. “We blend ours like wine.” 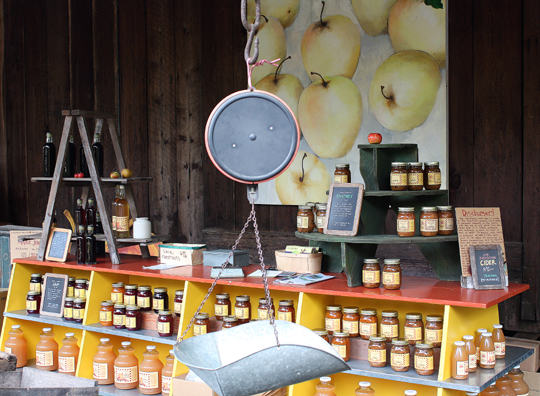 The farm also grows different varieties of quince and pears that are sold at the farm. Additionally, the apple products can be found at Sunshine Foods Market in St. Helena, Cowgirl Creamery’s store in the Ferry Building Marketplace in San Francisco and the Farmhouse Mercantile in Boonville, also owned by the Schmitt family.

Or course, the best way to appreciate the taste of these apples is to visit the farm. You can even take cooking classes there, which used to be taught by Sally, but now are overseen by her daughter. Four inviting cottages, each one different from the other, are available for guests to stay overnight, too. 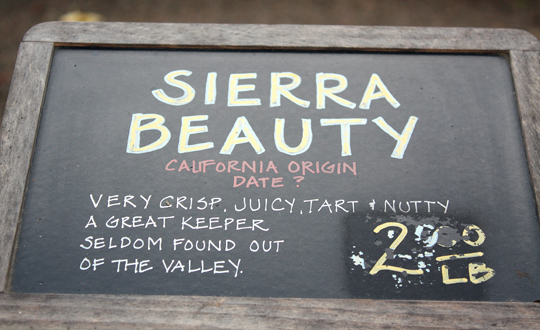 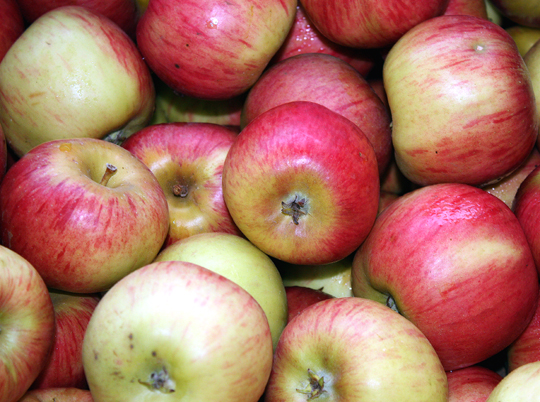 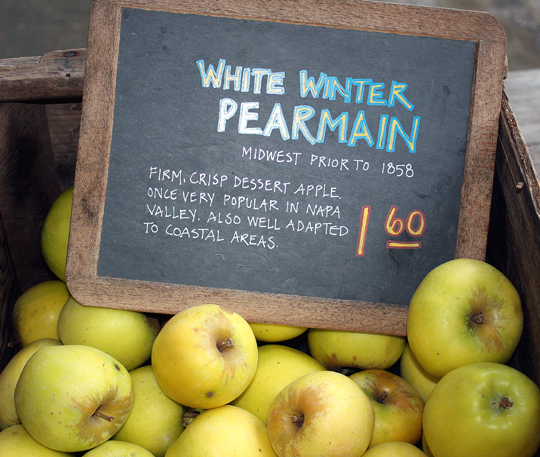 Since it’s a working farm with many chores to be attended to, there’s not always someone around manning the open-air farm stand at the entrance. So, it’s all done on the honor system. Bins of apples are marked by variety and price. There’s even a cut apple with a knife at each one in case you want to try a taste beforehand. Weigh your bag of apples, mark it down in a ledger, then leave the money in a box on the counter. It’s that simple.

And it’s the kind of old-fashioned integrity this farm and its founders are all about.

Tomorrow: An Apple Recipe from the Philo Apple Farm