A Visit to Healdsburg Shed You can find house-milled flour at the Healdsburg Shed — and a whole lot more.

Imagine the San Francisco Ferry Building Marketplace — only miniaturized, condensed, moved to Wine Country, and all owned and operated under one umbrella by one couple.

It’s also the winner of the 2014 James Beard Award for “Best Restaurant Design.” So, you know it’s a beautiful place to behold.

It’s also so much more than just a restaurant. The soaring, 10,000-square foot space is also a retail cookware store, a fresh produce stand, a gourmet foods purveyor, a mill (yes, they grind their own fresh flour there), a kombucha bar, and a community gathering space for concerts, movies, visiting chef dinners, and cooking demonstrations. Everything under one roof.

Daniel, who has an air of Alice Waters about her, and her husband, Doug Lipton, an environmental scientist, left San Francisco 20 years ago to start a 15-acre farm in Healdsburg, about five miles from the Shed.

Daniel had a yoga studio and a retail store in San Francisco; Lipton once ran a food co-op in Boulder, CO in the 1970s. But this is their first restaurant.

Located in downtown Healdsburg, on a site that once held an old metal shed, where locals bought their appliances, the couple created an airy, steel, glass and wood modern-day shed with garage-style doors the open up the whole place to the outside in summer.

“We wanted to bring everything together that we love,” Daniel says. “It’s a representation of who we are.”

It’s agrarian chic. It’s the way you’d want your farmhouse to look — if you owned one.

With a coffee bar, fermentation bar, and cute cafe all on the main floor, it’s been a place to come for breakfast, lunch or an afternoon snack. 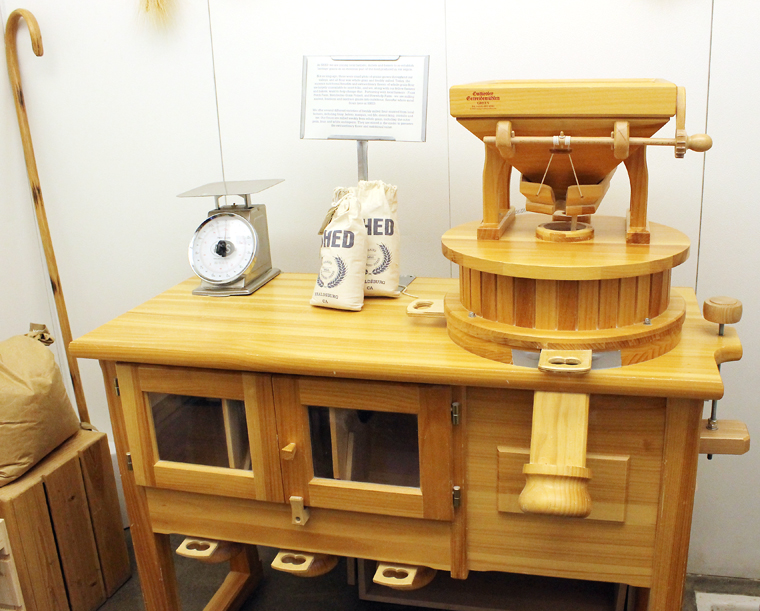 A lot of the produce used in the restaurant also is sold at the market stand.

But as of November 2015, it’s also been the spot to head to for dinner. That’s when the Shed wisely hired Culinary Director Perry Hoffman to debut dinner service.

If his name sounds familiar, it should. Hoffman has a culinary royal lineage in Wine Country. He’s the former executive chef of Etoile at Domaine Chandon in Yountville. His grandparents were the original owners of The French Laundry in Yountville, who, when it came time to sell, sifted through all the interested offers and made the prescient decision to sell it to Thomas Keller. The Schmidts then went on to start the beloved Apple Farm in Philo. Hoffman’s mom is a florist, whose blooms adorned the French Laundry and other notable Wine Country restaurants. 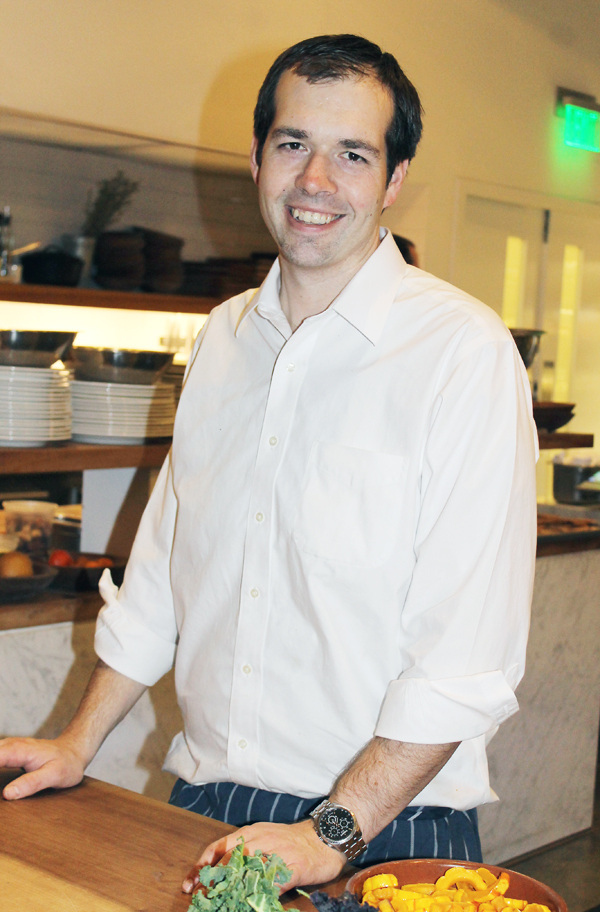 The shift from haute to down-home dining seems to suit Hoffman well. “I’m blown away by all the farms here,” he says. “We got great ingredients in Napa, but it wasn’t all grown within five miles like it is here. After all, if you have land in Napa, you’d plant grapes, not vegetables.”

His food is still beautifully presented and highly skilled. But now, there’s a warm rusticity to it, as I found when I was invited to dine at the Shed a couple weeks ago.

“The food should be homey and naturalistic, but contemporary,” Hoffman says. “I always say ‘No dots, no foams.” I don’t have anything against that. But this isn’t the place for it.” 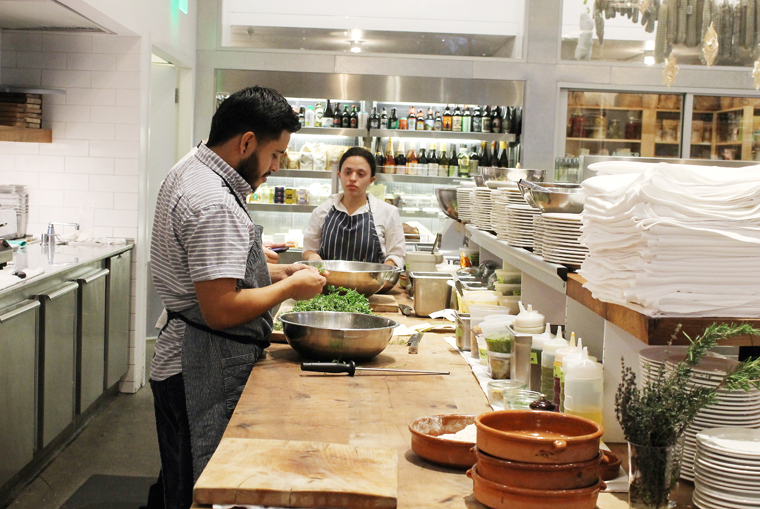 The kitchen on the main floor. Garnishes at the ready. The screened-in upstairs kitchen reveals itself.

Hoffman is front and center during service at the kitchen smack in the middle of the main floor. He has to have great communication between his kitchen crew because the main production kitchen is actually on the second floor. In a fun sleight-of-hand trick, the upstairs floor looks like a wide-opening gathering space — until you slide away a reclaimed wood wall to reveal the screened-in kitchen. That’s where the food is actually prepared. Then, it’s brought down to the smaller kitchen downstairs, where it’s finished in the wood-fired oven and with appropriate garnishes. The wine, beer, and fermentation bar.

Even if you always have wine or beer with dinner, do make time to try the fermentation bar offerings. If you’re new to kombucha and kefir, this is the place to get your taste buds acquainted with these beverages fermented with good-for-you bacteria.

On that particular day, we enjoyed a sampling of eye-squintingly tart pu-erh tea kombucha; Earl Grey kombucha with wintery tasting chai spices; and my favorite of the bunch, light-tasting and refreshing kefir water flavored with lemon and ginger. A couple of wood-oven baked oysters ($2.50 each) is a great way to start the evening. Arriving bubbling from the oven on a bed of rock salt, the oysters are plump, full of juice, and spicy from piment d’espellette mixed with butter. Smooth, rich chicken liver pate ($12) is smeared on a huge slab of toasted bread bought to the table on a wooden board heaped with frisee nicely finished with an eggy, lemony dressing. Sauteed wild mushrooms are scattered over the tartine adding a nice earthiness. With a glass of wine, this is the ultimate afternoon pick-me-up. We also enjoyed another tartine, this one draped with preserved Spanish white anchovies, celery and lemon aioli.

The farro verde ($14) reminds you of Hoffman’s fine-dining past. It’s simply gorgeous to look at — a still life of thinly sliced heirloom beets arranged just so with paper-thin circles of beets, baby greens, and wild flowers. Hidden underneath is farro verde that has the most delightful smokiness and chewiness. Hidden still are dabs of lardo cream — a bit of delicious naughtiness you don’t expect among all that vegetable virtuousness. Pretty as can be — farro verde.

The entrees arrive in Spanish cazuelas. My husband’s braised beef cheeks ($22) are fall-apart tender, and sweetened up with fuyu persimmons, yams, and a scattering of pomegranate arils. 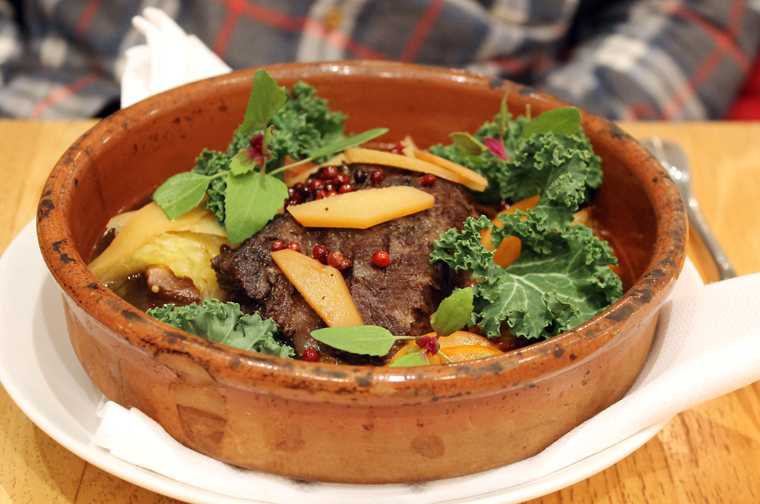 Red snapper in an incredible broth.

My wild red snapper ($24) is unforgettable. The fish is moist to be sure. And the kohlrabi cut into strands to mimic noodles is a fun touch. But it’s the broth that surrounds it that will stay in your taste memory long after the last drop is spooned up. It looks like a trendy green juice, as it’s made from an assortment of cooked down brassicas, then finished with a little chicken stock, butter, cream and chili oil. It’s herbaceous and grassy, and a little Asian-like in taste. It’s so light in body, yet so big and bright in flavor.

There are only a couple of dessert choices. You can also opt to choose something from the bakery case, which is what we did. As you know, I can never pass up a chance to nibble on a kouign-amann, that Brittany pastry full of buttery layers and caramelized sugar. 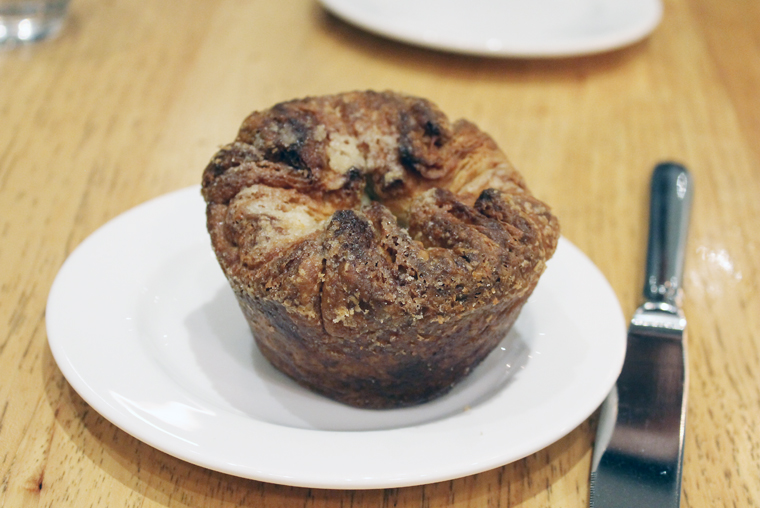 As a croissant, this would have been fine, as it had great flaky layers. But it just wasn’t a kouign-amann. It had the characteristic muffin-like shape, but the layers of caramelized sugar syrup were missing in action. Only the top was sugary.

If you haven’t yet stepped foot inside the Shed, make a point to do so on your next trip to Healdsburg. It’s got a little bit of everything and a whole lot to tempt. 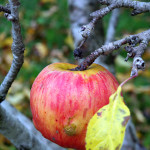 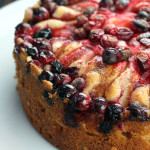