Still Worth the Ride Up to the Fifth Floor In a decade, the always chic Fifth Floor restaurant in the Hotel Palomar in downtown San Francisco has had an impressive roster of top-tier chefs rotate through.

Each has put their own stamp on this sumptuous dining room with its soft, white leather chairs; floor-to-ceiling, glass-fronted wine cellar; and terrace herb garden that can be viewed from tables by the windows.

Now comes Massachusetts-native, Bazirgan, who took over this year, following his stint as executive chef at Chez Papa Resto in San Francisco, and five years as chef de cuisine at No. 9 Park in Boston. 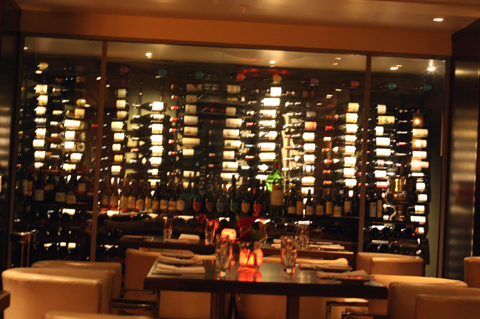 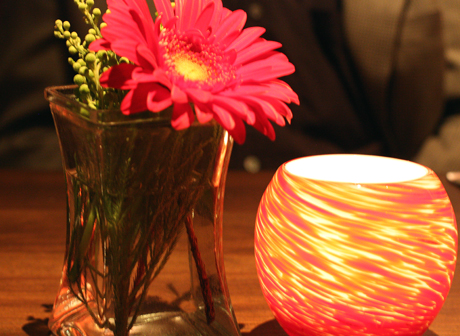 Recently, I had a chance to experience his cooking, when I was invited to be a guest of the restaurant.

The food remains as elegant to look at as always, and perhaps more accessible in some ways and a bit less precious.

Unlike so many other restaurants, if you order the chef’s tasting menu here, the entire table doesn’t have to commit to that option. Instead, I went with the $85 tasting menu with the accompanying $50 wine pairing, while my husband ordered a la carte. 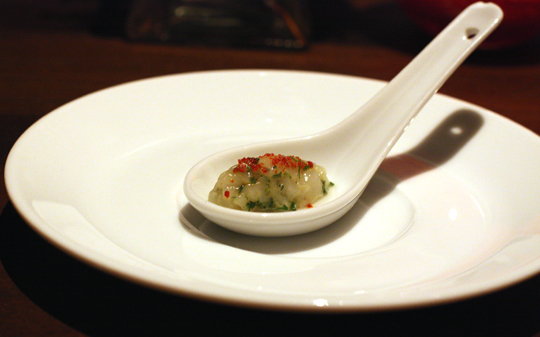 An amuse in a Chinese soup spoon arrived first, holding a bracing bite of scallop ceviche with a hit of espelette pepper.

Bazirgan is partial to Island Creek oysters from his home state and they showed up on the half shell, drizzled with sweet, salty, complex 25-year aged soy sauce and little pearls of finger lime. 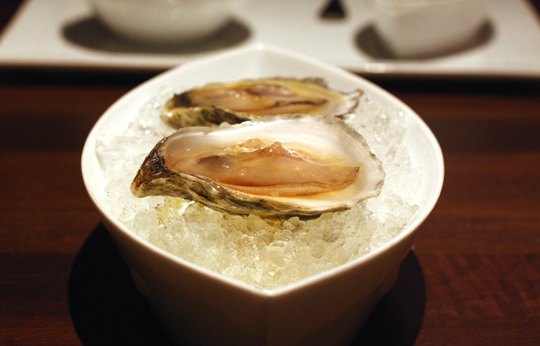 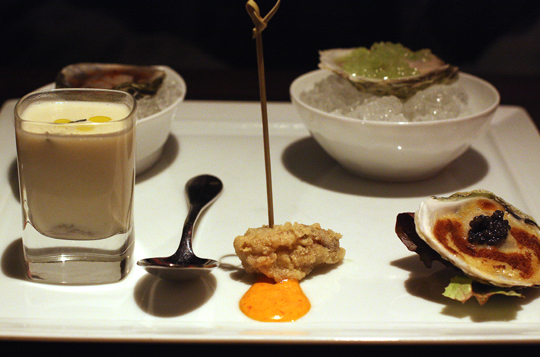 My husband also enjoyed those oysters, showcased five ways ($18) in a dazzling display on a large square white plate. There was an oyster with creamy Bearnaise and caviar, fried with rouille, dolloped with cucumber granite, dressed with a classic mignonettte, and a wonderful little cup of chowder that tasted so silky, creamy and intense with natural oyster liqueur. 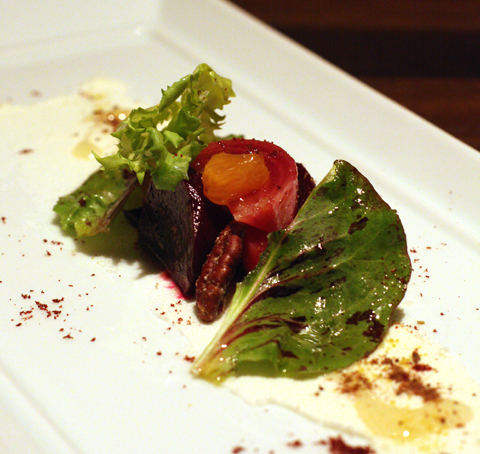 Next, roasted baby beets with a creamy, citrusy St. Maure cheese, toasted pecans, chicories and cara cara orange — a lovely blend of sweet, earthy and bitter. Although, smoked lardo was listed as an ingredient, my husband and I found it rather elusive on the plate.

My sauteed Branzini arrived with beautifully crisp skin and moist flesh, with the fish livened up by pureed salty-piquant olives and a saffron-pastis emulsion. 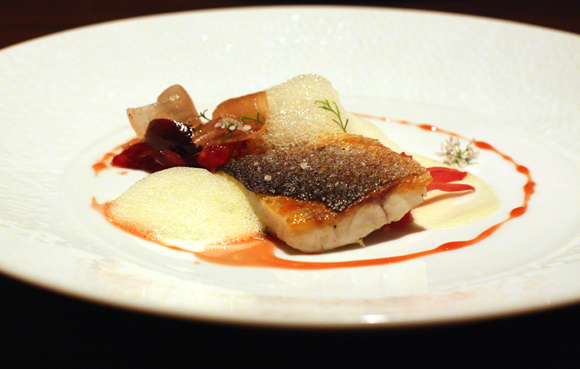 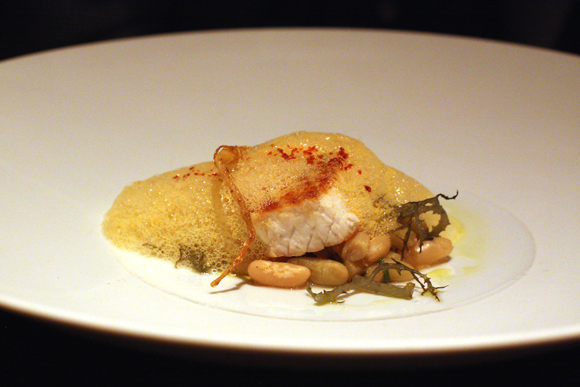 My husband’s local, line-caught swordfish ($28) was quite flaky for this usually dense fish, which arrived with creamy flageolet beans, parsnips and pickled seaweed.

Pastas are fantastic here. My rosemary tagliatelle came tossed with rich confit duck ragu, nettles and Parmigiano-Reggiano for a dish full of meaty flavors, yet lightened with the brightness of herbs. 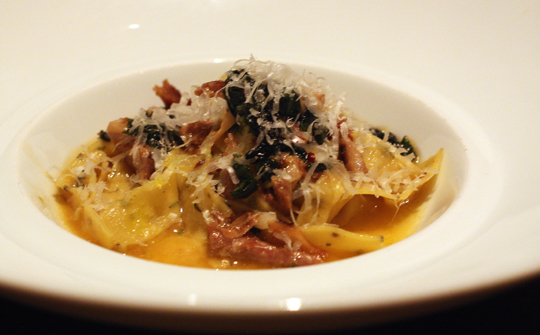 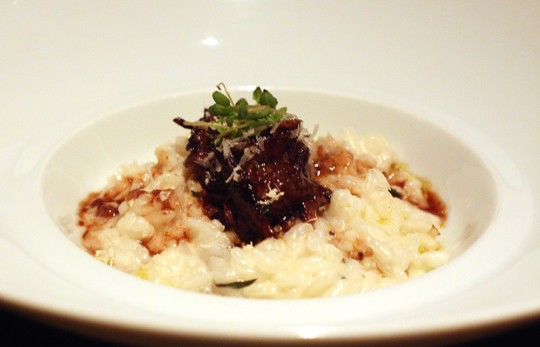 My husband’s slow-braised oxtail risotto ($12) was kicked up with a touch of fresh horseradish. A small chunk of oxtail crowned the creamy rice, so tender that I was about to fight him for the last bite.

My main on the tasting menu was supposed to be dry-aged New York steak, but Bazirgan sent out a duck dish instead, maybe because he heard me swooning over that last tagliatelle dish. My Liberty Farms duck breast arrived sliced and fanned on the plate, its skin salty, crisp and irresistible. The exquisite duck-port jus was thick, jammy, and almost candied tasting. Kumquats, sunchokes, celery root, rutabaga and dandelion greens completed the dish. 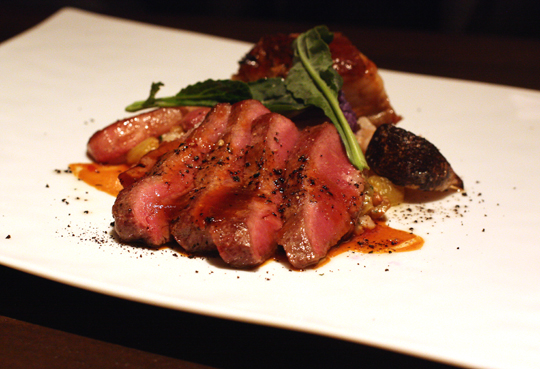 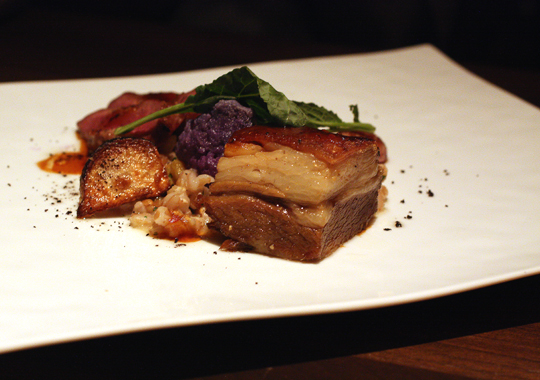 My husband’s roasted lamb loin and confit belly ($32) arrived with farro, black radish, black garlic and sweet golden raisins. It’s harder to come by, but I predict lamb belly will one day surpass the porky version as the darling ingredient of chefs. It’s extraordinarily tender like short ribs and with the same intense flavor, but with a lush cap of fat under the skin. 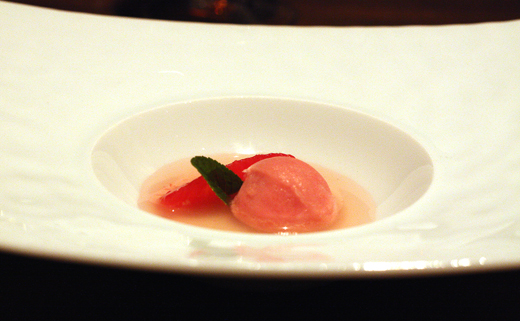 That was followed by an intermezzo of blood orange sorbet with grapefruit-lemon soup  that was sweet, floral and quenching.

Dessert was a lighter, brighter version of rhum baba, this one highlighted with pineapple, basil seeds and a kaffir leaf ice cream that nearly stole the whole show. I’m still dreaming about that ice cream that was so floral, tropical and bordering on a little savory. 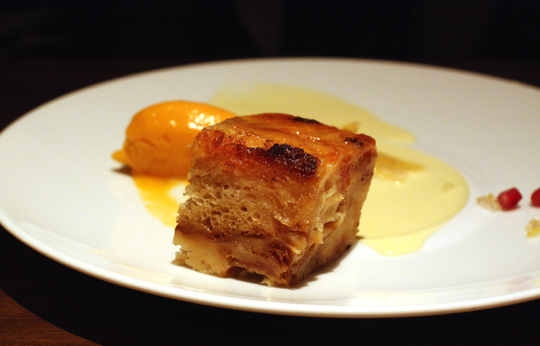 My husband was going to forgo dessert, but the chef delivered a custardy persimmon bread pudding accompanied by a scoop of persimmon-Buddha’s Hand ice cream that was so good we didn’t dare leave any morsel behind. 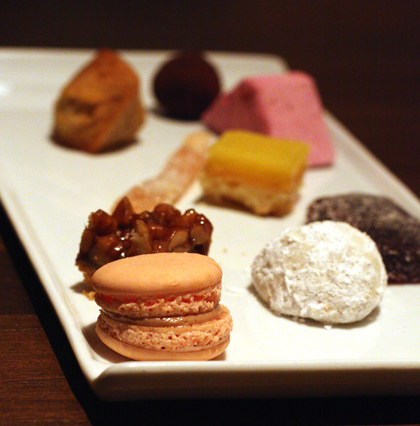 As we took the elevator back down to ground level lobby, we felt like we were still floating floors above. 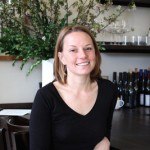 More: My Q&A with Chef Jennie Lorenzo, Formerly of the Fifth Floor 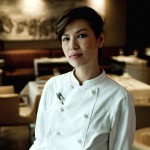 More: My Story on Melissa Perello, Formerly of the Fifth Floor