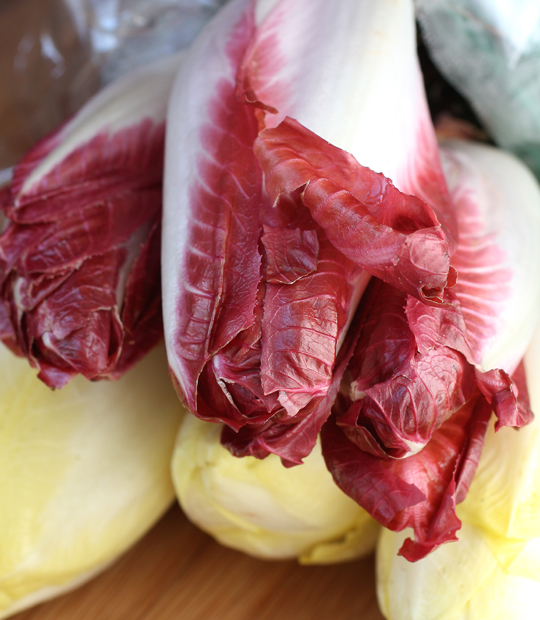 I sheepishly admit that I always thought either pronunciation was correct. In fact, I thought only those know-it-all-types who speak with their pinkies held high in the air actually refer to this distinctive member of the chicory family as “on-deev.”

How wrong I was, as Rodger Helwig, so kindly set me straight by telling me there is a difference after all. Helwig is the spokesperson for California Vegetable Specialties of Rio Vista, Calif., the only producer of endives in the United States. It sells more than 4 million pounds of red and white endives each year.

It’s not surprising that there’s only one producer of endive in this country, given how difficult it is to grow. Indeed, it must undergo two growth phases before it is ready for market. In the first phase, the endives are in the ground outdoors for 150 days, where it grows from seed to root. Next, the top of the plants are lopped off, the roots dug up, then placed in cold storage to enter a dormant phase. Then, the roots are removed from cold storage for their second growth, which is done hydroponically and takes place in a dark, cool and humid room.  They are left to grow for about 28 days before they are dug up for market. Because of this process, endives are available year-round in this country.

Helwig is hoping more Americans will discover the versatility, and wonderful crisp, nutty, slightly bitter taste of endive. Europeans love the stuff, consuming 13 to 15 pounds per person a year, he says. Americans, though, eat merely an ounce a year.

California Vegetable Specialties recently sent me a “bouquet” of endives — with their bottom roots still attached, and all bundled up in cellophane like flowers — to play around with. I especially enjoy endive raw. It’s perfect in salads, with its leaves separated and cut, then tossed with tangerines, pomegranate seeds or ripe pears. It’s also makes for great party food when you separate the leaves, which form almost little canoes to hold all manner of dips or dollops of seafood salad.

But this gave me a chance to cook endive, too, which I don’t often do, just because I’m so partial to it raw. 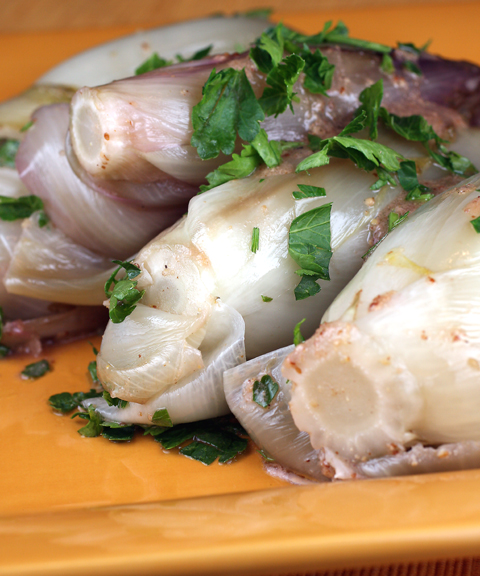 “Braised Endive in Mustard Vinaigrette”  is from “The Martha Stewart Living Cookbook, The New Classics” (Clarkson Potter) by the editors of Martha Stewart Living. This recipe appealed to me because I can never resist the assertiveness of a strong vinaigrette and because I was intrigued by the technique of cooking the endives in chicken stock before dressing it.

This makes for a super easy side dish. As the endives cook for about 20 minutes in the skillet with the stock, you can make the quick vinaigrette — a basic blend of mustard, red wine, extra virgin olive oil.

Once the endives are cooked, blot them dry, then toss with the dressing before garnishing with chopped parsley.

The chicken stock mellows the bitterness of the endive, softening and rounding out its flavor. The vinaigrette adds a bold punch.

Helwig jokes that he doesn’t really care if you call it “en-dive” or “on-deev.” He’s just happy if you eat it.

In a large skillet, melt butter over medium heat. Add endive, and cook, turning occasionally, until browned on all sides, about 5 minutes. Pour stock into skillet; bring to a boil, and cover. Reduce heat to medium-low, and simmer, turning endive occasionally, until just tender; about 20 minutes.

Using a slotted spoon, transfer endive to a paper-towel-lined plate; discard the stock. Pat the endive dry, and set aside.

Make dressing: In a small bowl, whisk together the mustard and vinegar. Season with salt and pepper. Whisking constantly, pour in the oil in a slow, steady stream; whisk until emulsified. Gently toss each endive in the dressing, coating well. Garnish with the parsley, and serve at room temperature; set any dressing on the side. 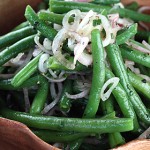 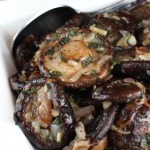 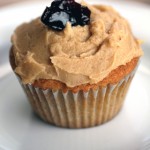 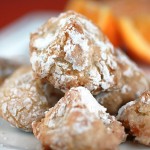 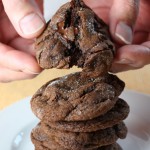