An Evening at La Mar with Freeman Winery The quenching, tart Pisco Sour may be the usual drink of choice at La Mar Cebicheria in San Francisco, but about once a month, the restaurant also hosts winemaker dinners.  And you know these events are guaranteed to be stellar when they’re presided over by the restaurant’s consulting wine director, Emmanuel Kemiji, a certified Master Sommelier who not only makes his own wine, but has worked with some of the best chefs in the Bay Area.

In fact, Kemiji was responsible for introducing me to one of my new favorite Pinot Noir producers — Freeman Vineyards and Winery of Sebastopol. 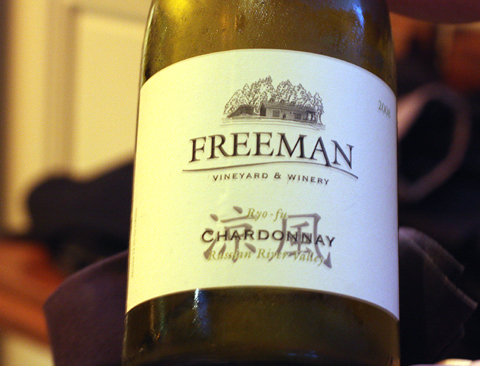 It’s no secret that I have a soft spot for Oregon Pinot Noirs, with their more earthy profiles, rather than the jammy fruit-forwardness of so many California-style Pinots. Freeman Winery — owned by Ken and Akiko Freeman — make Pinots in that elegant style with notes of dark cherry, loamy mushroom and gravel. They are pure silky pleasure to drink.

Recently, I was invited to be a guest of the restaurant at a special dinner spotlighting Freeman wines. When the San Francisco fog gives way to warmer evenings, the wine dinners are held in the spacious back patio with its spectacular view of the Bay. But on a chilly night like this one, it took place at a long chef’s table beside the bustling kitchen. 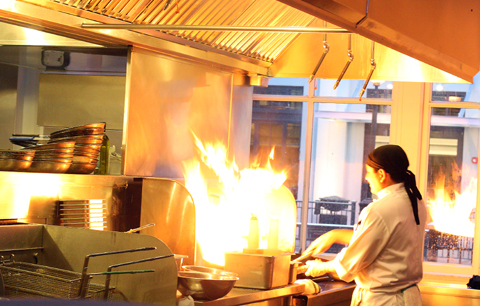 La Mar is famous for its cebiches — raw seafood that’s “cooked” with citrus. But Pinots and Chardonnays typically clash with such acidic fish preparations, so there was no cebiche on our tasting menu that night. Instead, there was an amuse that paid homage — a shot glass filled with spicy, tangy, prickly cebiche-like marinade transformed into almost aperitif. The first course arrived dramatically with a huge Gulf prawn standing upright in a mash of lima beans that actually tasted rather potato-like. Next came creamy pesto risotto with slices of ahi fanned out over the top. A creamy sauce of aji amarillo peppers added a whisper of heat. 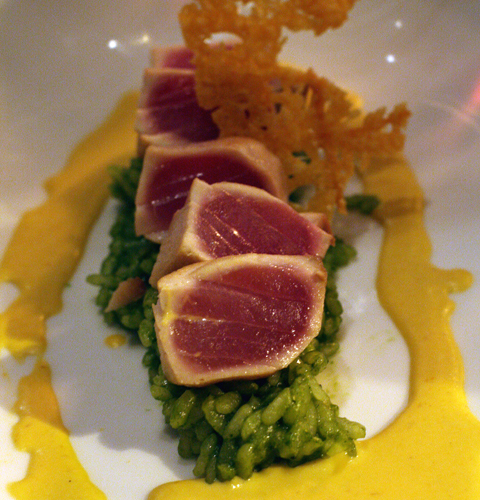 Those same chilies turned up to accent seared chicken, a dish with rich components of fresh cheese, potato cannelles and a soft-cooked quail egg in a dish that was a quite French-like. 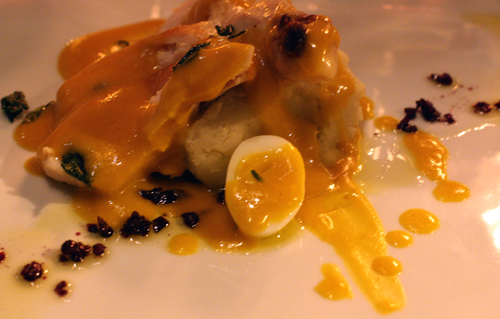 Next, my favorite dish of the night — fall-apart tender beef cheeks braised with red wine, and the Peruvian red pepper known as aji panca. The meat was deeply beefy. It’s like your favorite beef short rib — only 10 times better.

The beef came with mashed potato puree — one of several purees or mashes that night on the dishes, which were maybe one too many. It might have been nice to mix up the variety with a crisp vegetable or two instead on one of the dishes. 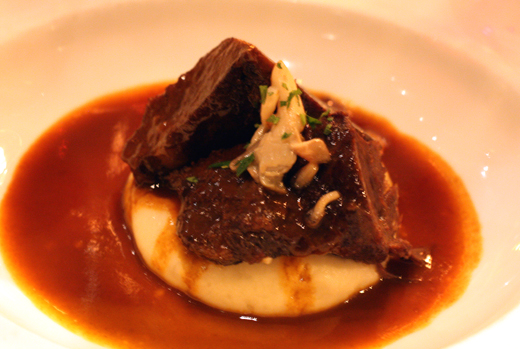 Dessert packed a fun kick. A scoop of vanilla ice cream arrived atop a thin slice of buttery pound cake, along with two little glasses — one that held espresso and the other, pisco, the clear grape brandy of Peru. You pour as much as you want of each over the ice cream. Think of it as the Peruvian version of an Italian affogato, but with a tipsy finish.

After all, it may be a wine dinner, but you just have to have a little pisco in there for good measure. 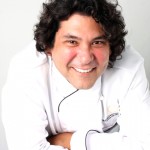