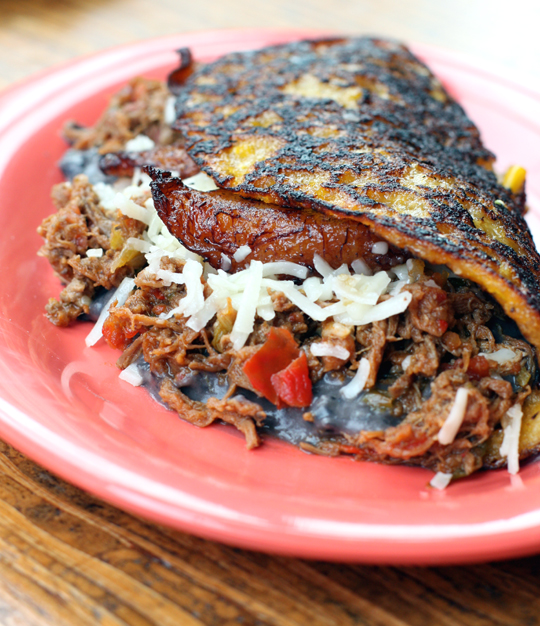 Pica Pica Maize Kitchen, which serves up lusty Venezuelan food, is an ideal place for celiacs, as the menu is entirely gluten-free.

But more than that, it’s a must-stop place for anyone who just loves the soulful flavors of corn, yuca, plaintains, avocado, black beans, chiles and long-cooked, tender meats.

Adriana Lopez Vermut opened the first Pica Pica Maize three years ago in Napa’s Oxbow Public Market, with her father, Leopoldo Lopez Gil, who owns several restaurants in Caracas. A year ago, they opened their first San Francisco outpost in the Mission District, which is the one I visited when I was invited in to try the menu recently.

“Pica pica” means “a little bit of this, a little bit of that” and that’s exactly what you’ll want when you see the tempting offerings available as you scan the wall menu, then order at the counter. While there are salads, soups and sides, the heart of the menu revolves around breads — all made from corn flour. Take your pick of arepa ($7.99), a grilled white corn flour cake; cachapa ($8.99), a pancake made of sweet yellow corn or a maize’wich ($7.99), which has the shape of an arepa and the sweet corn flavor of the cachapa. Then, pick a filling. Eight are offered regularly, plus daily specials. Among the staples are pulled pork with tomatoes, avocado and aioli; shredded beef with sweet plaintains, black beans and queso fresco; and guiso — a stew of beef, chicken and pork. 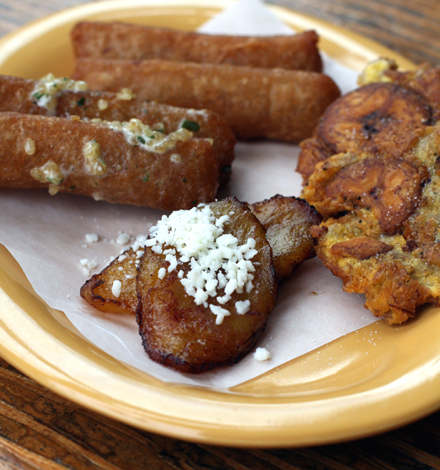 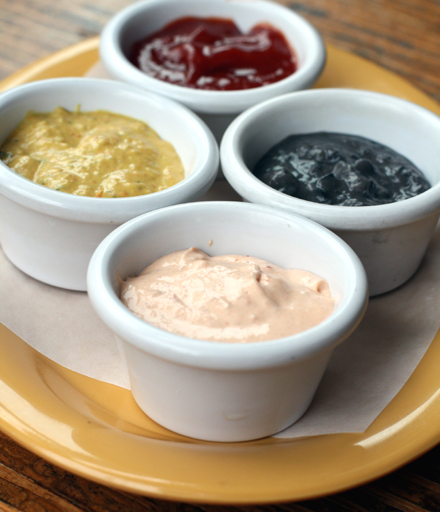 We nibbled on an assortment of sides ($3.99 each) that included crisp yuca fries, tajadas (sweet, soft plaintains with queso fresco) and tostones (fried green plaintains). Alongside were a rainbow of dipping sauces ($1 each), including Venezuelan guacamole made with Worcestershire sauce and honey; a sweet-spicy ketchup; a sweet-tangy tamarind one; and pica’ pun,  made with fiery habanero and mustard that’s pretty hard to stop eating even as your tongue starts a tingling. 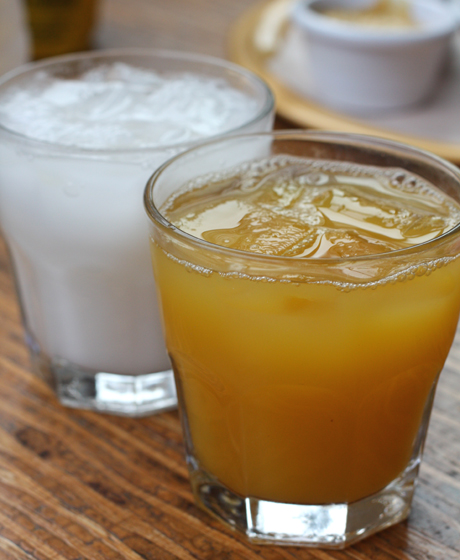 There’s beer on tap, sangria, and wine to help put the fire out. But don’t pass up the signature Passion Fruit or Coconut Lemonade. The former is the sunny tropics in a glass, while the latter is positively addicting. If you’ve jumped on the current bandwagon over coconut water, wait till you taste this instead. It’s even better. It has the body of coconut water, a burst of citrus and a slight creaminess. I was only going to take a couple of sips, but I downed it in no time with a great big smile.

The chupa ($5 for a small) is always on the menu. This hearty vegetable soup has chunks of chicken, corn on the cob, potatoes and avocado in it. It’s a soup you want whether you’re fighting a fever or feeling totally hardy. 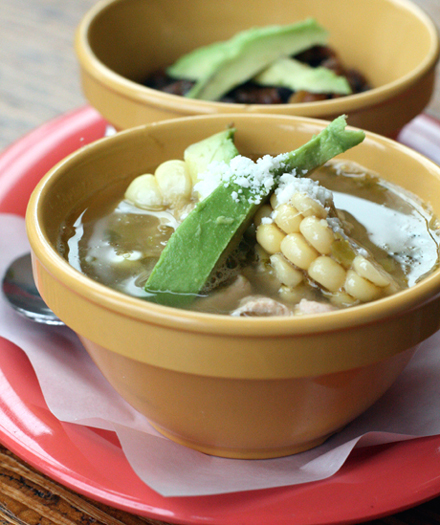 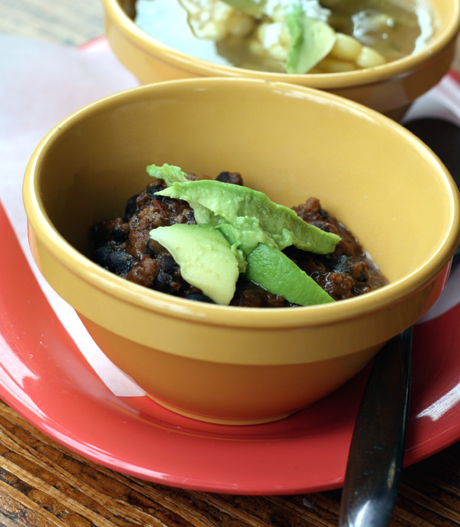 Chile Negro is pure yum. It’s a stick-to-your-ribs blend of ground beef and pork with dark beer and chicharrones. As my dining companion Candace so aptly nailed it: “It’s like ethnic chili.” Or the best Sloppy Joe you can imagine.

The cachapa is a sight to behold — a large, soft, griddled corn pancake folded over like a crescent moon, barely able to contain its filling of shredded beef, black beans, sweet plaintains and Monterey Jack. With its enticing sweet, corn bread-like flavor, it’s easy to see why this is the most popular dish on the menu. 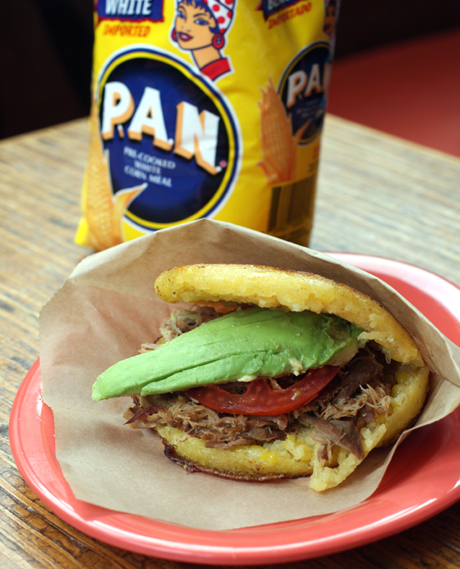 The maize-wich, made of corn flour, arrived stuffed with some of the best pulled pork. It was buttery-tender — a great combination with the almost crumpet-like texture of the bread.

Apparently, in Venezuela, the pepeada is one of the most popular arepas around. Supposedly named for a Venezuelan queen, its meaning is “sexy.” Well, one taste and you can definitely see the correlation. Pepeada is a combo of creamy on creamy — chicken salad with mashed avocado. It’s rich as all get out. You can’t eat it without it dripping all over your fingers; and you can’t take a bite without licking your lips. If a sandwich can bring sexy back, this is the one to do it. 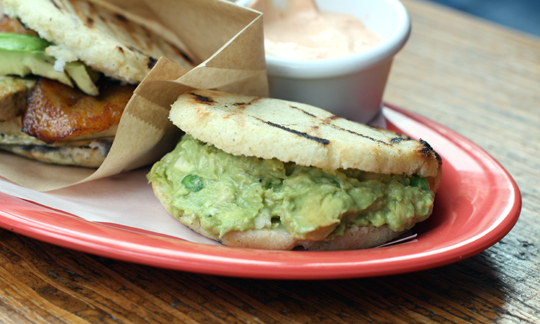 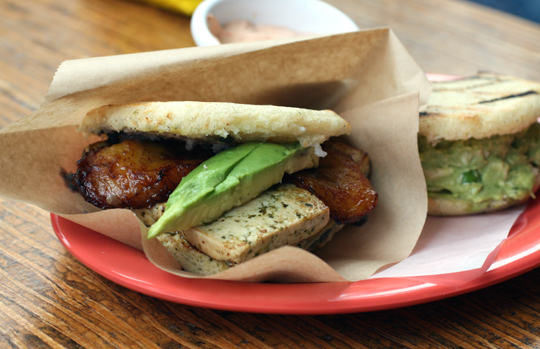 If you want a more chaste version, the grilled tofu arepa is highly worth trying. Marinated with cilantro, it’s firm yet with just enough give, and with a subtle smokiness.

For dessert, you can’t go wrong with the ganache-like pot de creme made with Venezuelan chocolate or the wonderful rice pudding that hides orange zest and tiny strands of coconut. I couldn’t be more glad to hear that, either. Because this, my friends, is what we wish all fast-food could be like. 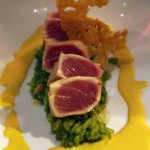 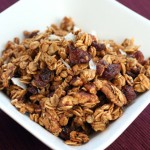