SPQR — Where the Chef Has His Hands in Just About Everything But what about the lovely desserts there? Yeah, he makes those, too.

And the whimsical torched marshmallows and molded chocolates with runny caramel centers accented by a plethora of different sea salts that arrive at the end of the meal? Yup, those also are his handiwork.

Not to mention, he and owner Shelly Lindgren just came out with their new “SPQR: Modern Italian Food and Wine” cookbook (Ten Speed Press).

It makes you wonder not only if this Matt-of-all-trades ever sleeps, but how he manages to do all of this in a kitchen that is smaller than a starlet’s walk-in-closet.

Three years ago, when he first took over the helm at this San Francisco restaurant, whose name is an acronym for Senatus Populesque Romanus or “The Senate and People of Rome,” his food was quite good. Now, it’s a revelation, as evidenced by a recent dinner my husband and I splurged on there.

It’s rustic-refined. It’s all bold flavors and great ingredients fashioned with real finesse by this chef who has cooked with the likes of Chefs Charlie Palmer, Todd English, Rick Moonen, Tom Colicchio and Thomas Keller.

At this always-crowded, long, narrow restaurant, menu prices are moderate, with appetizers running $12-$19, pastas $18-$20, and mains about $28. Accarrino volunteered to just cook for my husband and I, fashioning a personalized tasting menu of a multitude of dishes off the regular menu but in smaller portions. 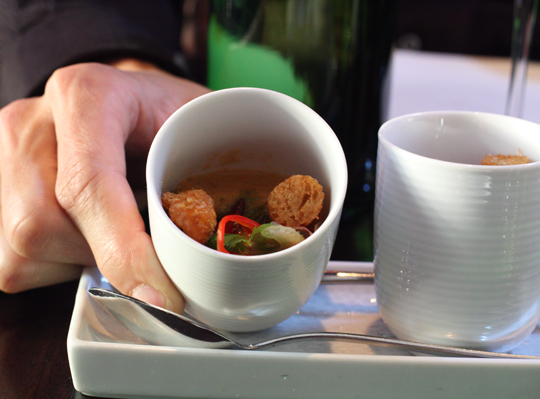 It began with an amuse of creamy tomato-strawberry gazpacho garnished with dehydrated strawberries that added a crisp-chewy texture. Next, the supremely clever and absolutely fabulous veal tongue pastrami with onion jam and caraway. The tongue, sliced thinly, had all the peppery taste of pastrami, but a silkier texture from the veal.

Suckling pork confiture was spoon tender with crackling skin. With the sweet citrus flavor of orange and tang of pickled peppers, it would make for the world’s most upscale pork sandwich. 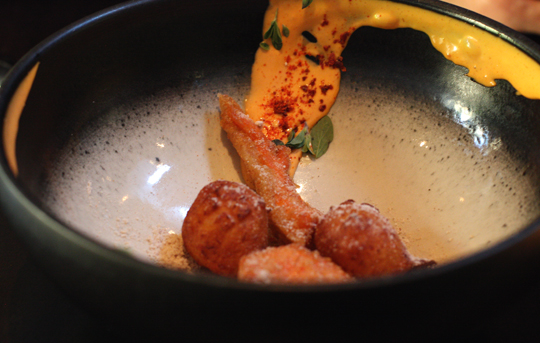 That was followed by a special that night, a snack of salmon and trout — cooked tempura-style. The flavor of the fish shined through the light, airy batter. A swoosh of Calabrian chile aioli made for the perfect, creamy, spicy dipping sauce.

Accarrino has begun working directly with a farmer in Yountville to grow produce specifically for SPQR, including the perfect figs, padron peppers and wild fennel that made up the “insalata di estate.” Fennel foam, siphoned onto the plate tableside, as well as my favorite burrata, made this dish so much greater than the sum of its parts. 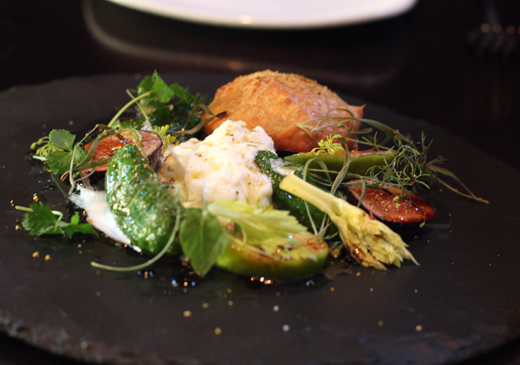 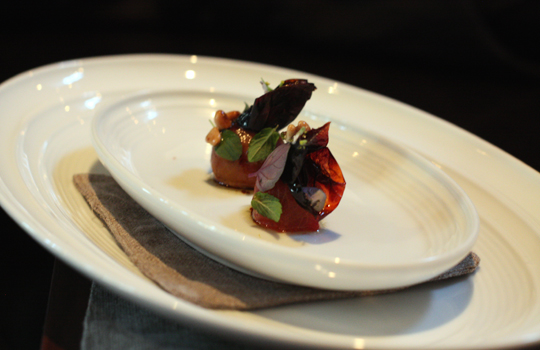 You may have enjoyed bone marrow before. But you’ve never had it like this. Forget the dinosaur-like bones on the plate. Accarrino roasts the bones, scoops out the luscious marrow and uses it in sformato, a molded custard. The texture is fluffy soft, yet there’s fatty bone marrow incorporated into it. Talk about your wicked dichotomy. If that weren’t enough, there are also tiny cubes of short ribs, marinated for 48 hours and braised for 24 in Slovenian red wine, plus shaved Australian black truffles. Oh my.

After I balked at having to peel cherry tomatoes for one of his recipes in his new cookbook, Accarrino gave me a veritable poke in the rib with an amuse of two teeny black cherry tomatoes — not only peeled but with their skins crisped and served alongside. OK, point made, I must admit.

That was followed by the parade of pastas: First, pillowy agnolotti filled with smoked goat cheese with crisp sweet corn kernels and fruity chanterelles. Second, the sensational smoked fettuccini with sea urchin, smoked bacon and a tiny soft quail egg on top with its yolk still oozy. Each bite was a symphony of salty, briny, peppery, creamy,smoky, porky richness. 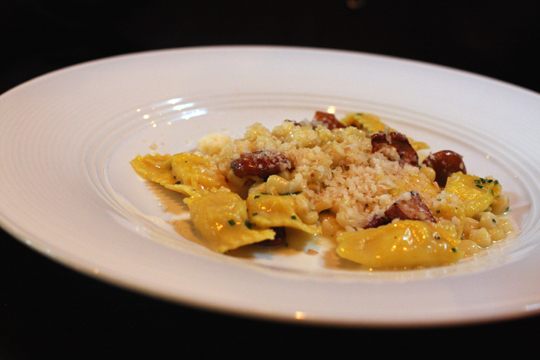 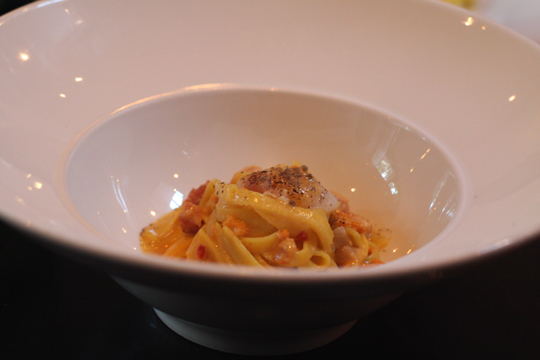 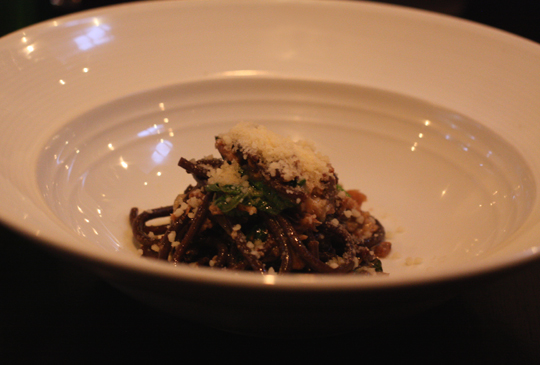 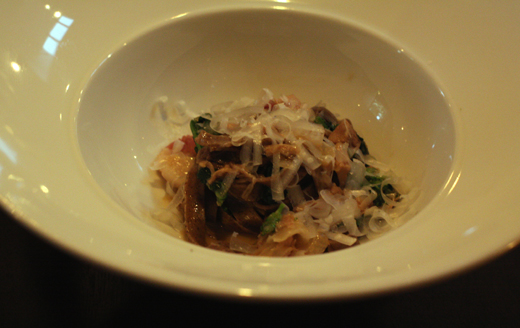 Chocolate in pasta? Why not, when its earthy, bitter cocoa edge goes so well with duck ragu?

Beer-braised suckling pig with rapini were tossed with strands of buckwheat pasta for a dish that was smoky and nutty.

Lasagna has never looked so fanciful as in this rendition with rabbit, hen of the woods mushrooms and arugula pesto. We didn’t count, but our server told us there were 24 layers in all — baked in a terrine, then sliced and heated to order. The neatly cut, tall cube had the texture of bread pudding — dense yet soft, the layers all compressed into one to create a savory taste of the forest. Then it was on to beef ribeye in an olive sauce with red wine onions, okra, a smear of smooth potato puree and a toy-like stack of little crisp onion rings.

Wisconsin cheddar arrived on a tiny slice of caraway-currant bread smeared with elderberry jam. A teeny ice plant that had been candied and sugared made for an unusual garnish. 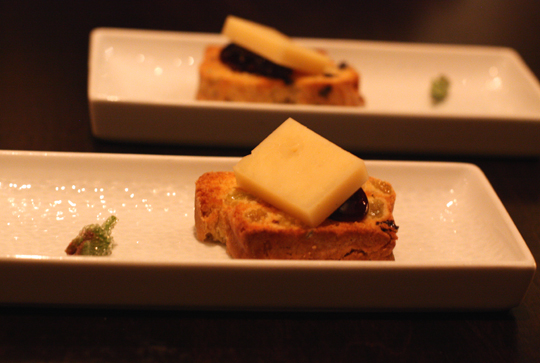 For a palate cleanser, there was a refreshing elderflower and fennel granita.

For dessert, a study in milk and dark chocolate with Earl Grey foam; and bruleed figs with an amazing custard steeped with fig leaves, which gave it an almost coconut-like flavor. 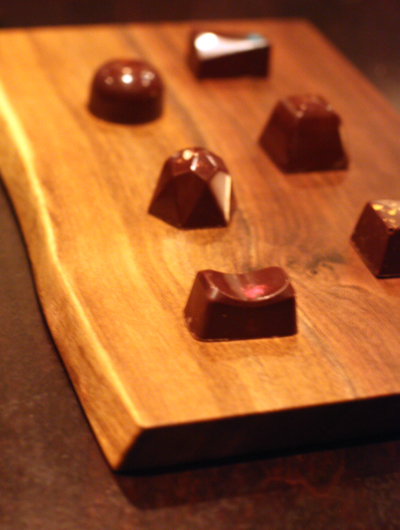 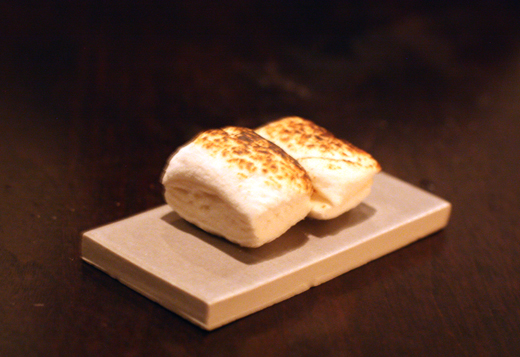 Lastly, the aforementioned chocolate caramels and the toasted vanilla marshmallows.

By that point, we were truly waving the white flag — not only in satiation, but in salute to a chef who seemingly does it all, and so very, very well. 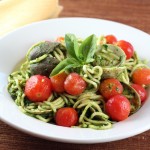 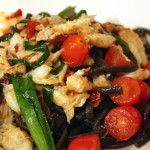 And: My First Visit to SPQR