She may be most know for her gutsy nose-to-tail cooking. But celebrated New York Chef April Bloomfield wants you to know she’s equally equipped with root-to-shoot flair.

Her first cookbook, “A Girl and Her Pig” (Ecco, 2012) may have been meat-centric. But her follow-up, “A Girl and Her Greens: Hearty Meals from the Garden” (Ecco), decidedly puts the emphasis smack dab on a cornucopia of seasonal fruits and vegetables.

Bloomfield is the award-winning chef-owner of The Spotted Pig, The Breslin, and The John Dory Oyster Bar, all in New York, as well as Tosca Cafe in San Francisco. She was also the star of season 2 of “The Mind of A Chef.”

In her cookbook, of which I received a review copy, she offers up dishes that home-cooks can actually make. That includes delights such as “Asparagus Quiches with Mint,” “Roasted Young Onions with Sage Pesto,” and “Sweet Corn Ice Cream with Butterscotch.” 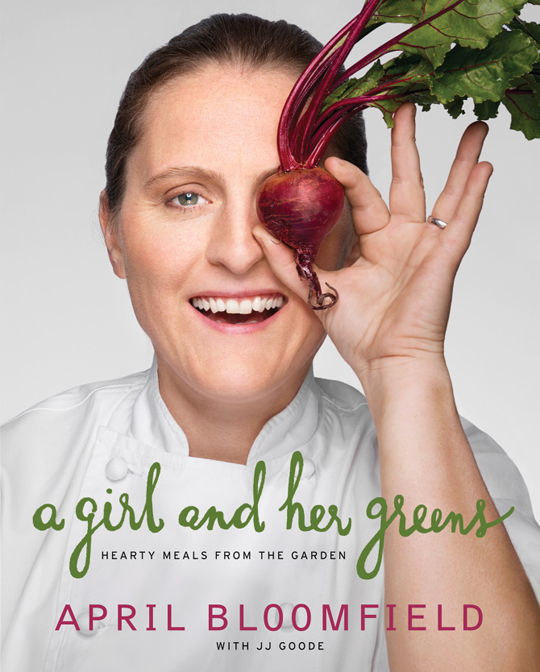 With stands at my local farmers market piled high with brilliant purple eggplants at this time of year, I was drawn to Bloomfield’s recipe for “If-It-Ain’t-Broke Eggplant Caponata.”

First of all, you’ve just got love the name. Second, I’ve always loved the versatility of this Sicilian eggplant salad that’s typically served at room-temperature. It’s great as a side to perk up most anything. Its sweet-tangy flavor and chunky texture makes it ideal to spoon atop crostini or fold into an omelet.

Oftentimes, though, caponata is too tart or too sweet or takes on a mushiness. It’s hard to find one that is ideal.

When you read Bloomfield’s recipe, you might question the meticulousness. Do I really need all that celery? Do I need to cook it that long? And do I really have to cook the eggplant separately? Really?

Yup, you kinda do — if you want it to turn out as fabulous.

There is an abundance of celery. And yes, you cook it slow and low with onions for longer than you think you must. But once you taste how incredibly sweet they get, you realize why you need to be so patient.

The eggplant is salted, and yes, cooked separately. It leaves the eggplant ever so creamy with crisp edges.

It’s rather miraculous how everything melds together, yet somehow every ingredient still remains distinctive and gets its due.

I didn’t change a thing with this recipe. After all, if it ain’t broke…. 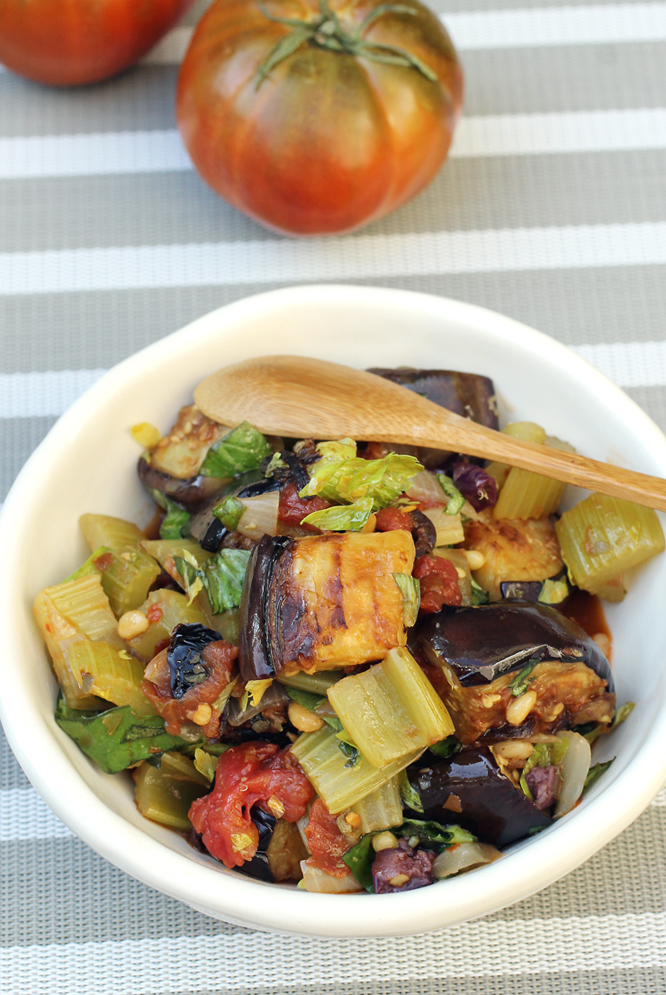 Just imagine all the ways you can enjoy this caponata.

2 pounds large eggplants (preferably a purple variety such as Rosa Bianco), unpeeled, topped, tailed, and cut into about 1 1/2-inch pieces

Maldon or another flaky sea salt

1/4 cup Nicoise olives (or a mixture of varieties), smashed with the flat of a knife, pits removed, and very roughly chopped

A five-finger pinch of basil leaves, roughly chopped at the last minute

Toss the eggplant and kosher salt together in a colander and set the colander over a bowl. Let the eggplant sit for about 30 minutes.

Meanwhile, quarter the tomatoes and trim off any pale bits. Hold each chunk over a bowl, and use your fingers to push out the juice and seeds. Strain the juice, discarding the seeds. Finely chop the tomatoes.

Heat 3 tablespoons of the oil in a medium pot over medium-high heat until it shimmers. Add the onion, celery, garlic, and 1 teaspoon of the Maldon salt. Cook, stirring and scraping occasionally, until the onion is translucent and begins to stick to the pot, about 10 minutes. Lower the heat to medium and cook the vegetables for another 10 minutes. Add the chilies and keep cooking, stirring and scraping occasionally, until the vegetables are light brown, soft, and sweet, about 10 minutes. Stir in the tomatoes and their strained juice and let the mixture simmer, stirring now and then, for about 15 minutes.

Pat the eggplant dry. Heat the remaining 1/2 cup of olive oil in a medium heavy skillet over medium heat until it shimmers. Cook the eggplant in two batches to avoid crowding the pan, turning the pieces often and adjusting the heat if necessary, until they’re deep golden brown on the outside and creamy inside, 10 to 12 minutes per batch. Put the eggplant on paper towels to drain. Let it cool to warm.

Transfer the eggplant to a large bowl, sprinkle with the vinegar and a pinch or two of Maldon salt, and give a very light stir, being careful not to smoosh the pieces. To the bowl, add the tomato mixture, olives, pine nuts, capers, basil, and a small handful of the reserved celery leaves. Have another gentle stir, and season to taste with Maldon salt.

The caponata will keep in an airtight container in the fridge for up to 3 days, but you should always serve it at room temperature.

From “A Girl and Her Greens” by April Bloomfield 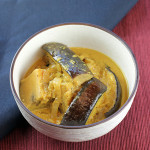 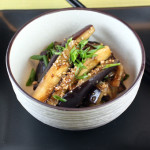 tagged with A Girl and Her Greens recipe, April Bloomfield recipe, caponata recipe, eggplant recipe, what to do with all that eggplant?
Print This Post