We’ve all seen those video clips of how superior the food looks that’s served in schools in France. No chicken fingers and water-logged hot dogs. Just fresh-baked baguettes, from-scratch soup, green salads and restaurant-quality-looking main dishes — served on real plateware, in courses. It’s enough to make me want to go back to school.

So it shouldn’t be surprising that the recipes in this cookbook are not dumbed down in any way. It proves food doesn’t have to be made with “Star Wars” cookie cutters or drowned in Ranch dressing to appeal to younger appetites. Just make good food well — and get the kids involved in the preparation — and they will develop greater enthusiasm and appreciation for it.

I’ve made plenty of different styles of ratatouille — cooked on the stove-top or in the oven. Usually, they call for cooking all the vegetables all mixed together or at least combined in that manner before serving.

Here, the vegetables are all arranged separately in their own rows over a bed of thinly sliced onions They are cooked for quite awhile in the oven yet they retain their shape, integrity and individuality. In this way, you distinctly taste the eggplant separately from the zucchini and from the tomatoes, making you appreciate each one singularly, instead of having the tomato or eggplant overtake the dish as sometimes happens with ratatouille. The long roasting also brings out the inherent sweetness of each vegetable. A flourish of Herbes de Provence adds a perfumey aroma that is undeniably a taste of the French countryside.

The recipe calls for a 5-by-7-inch pan. I only had a 7-by-10-inch one, so I just added more vegetables to fill it snugly.

That’s the beauty of this dish. You may not be able to organize your garage to save your life. But you can certainly gain order over one small baking pan. Pack the vegetable slices in tightly before baking.

Preheat the oven to 400 degrees.

Place the onion slices and minced garlic in the bottom of a 5-by-7-inch baking dish. Sprinkle with 1 tablespoon of the olive oil, the 1/2 teaspoon flaky sea salt and some freshly ground black pepper.

Stack the eggplant slices upright against the long side of the dish so they are slightly overlapping each other. They should be quite tightly packed. Follow with a row of zucchini slices, arranged in the same manner. Next, make a row of tomato slices.

Drizzle 1 tablespoon of olive oil over the vegetables, sprinkle with the Herbes de Provence, cover the dish with aluminum foil and bake for 45 minutes.

Remove the foil from the dish, drizzle with a little more olive oil and bake, uncovered, for a further 20 to 30 minutes, until the vegetables are cooked through.

Season to taste. Serve warm or at room temperature.

From “In the French Kitchen with Kids” by Mardi Michels 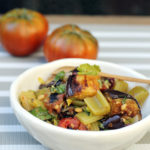 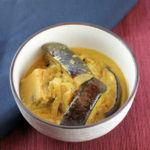 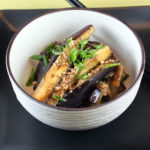 And: Eggplant in Garlic Sauce