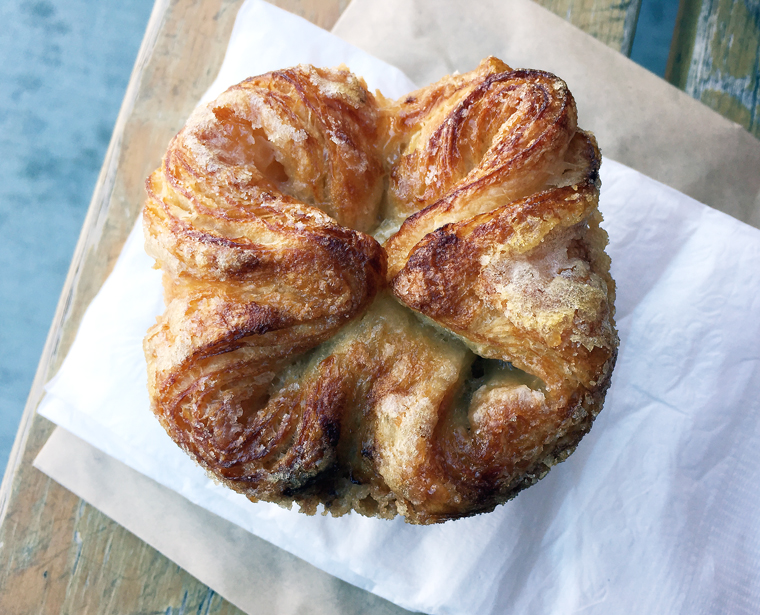 The lemon custard cake ($3.50) is a beauty with its puddle of lemon curd in the center. It’s also gluten-free, most likely made with almond meal from the taste of it. Thyme adds a delightful, delicate herbal note, too.

The salted caramel babka ($4) looks like a sticky bun. And it is quite sticky. But the texture is more like that of a babka in that it’s a little fluffier and cake-like in texture. 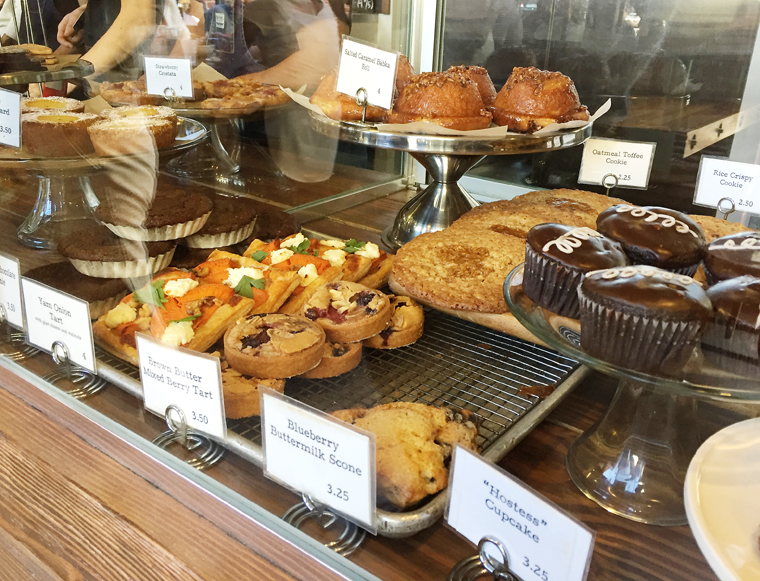 Not every taco truck chef has trained under Alain Ducasse in Paris. But Chef Wes Avila of Guerrilla Tacos has, which makes his truck imminently worth chasing down.

Everything is made in-house. The seafood is sustainable. The ingredients are local. The truck making its stop.

Just get there early, as he often sells out of things fast. Which is what we found out when we got there at the tail-end of lunch time.

Still, it was worth it if only to try the hamachi tostada — which has got to be one of the prettiest dishes to ever come out of a food truck.

Thin slices of sushi-grade yellowtail are fanned out over a crisp tortilla, and garnished with plenty of lime, a touch of tomatillo chile, furikake and a trove of bulls blood beet micro leaves. 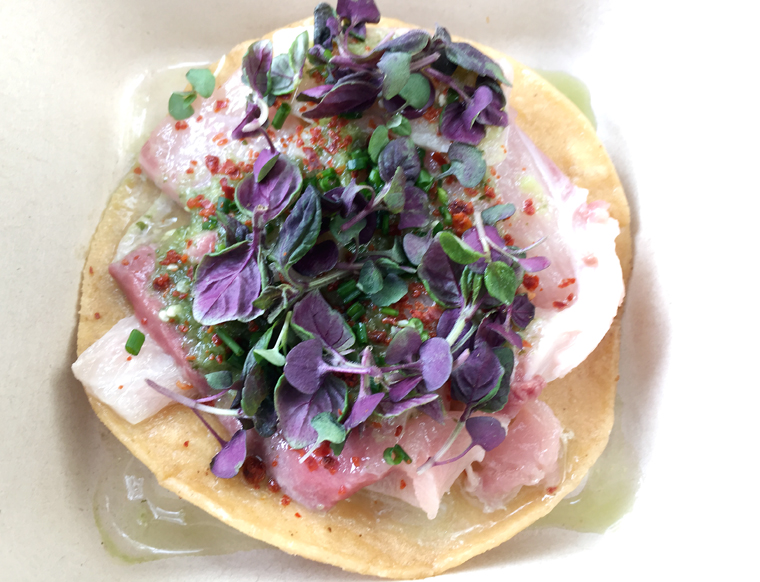 A tostada worth waiting in line for.

You might balk at the $8 price tag at first, but not after you enjoy the bright, clean, perfect flavors.

Locol is chefs Roy Choi (of Los Angeles Kogi Truck fame) and Daniel Patterson (of the fine-dining Coi in San Francisco) answer to McDonald’s, a fast-food concept that aims to turn out affordable, good-for-you, and good tasting burgers, bowls, chicken nuggets and more in neighborhoods that need it the most.

It succeeds quite admirably.

The first one opened in Watts this January. Two more are already slated — one in Oakland, the other in San Francisco’s Tenderloin. 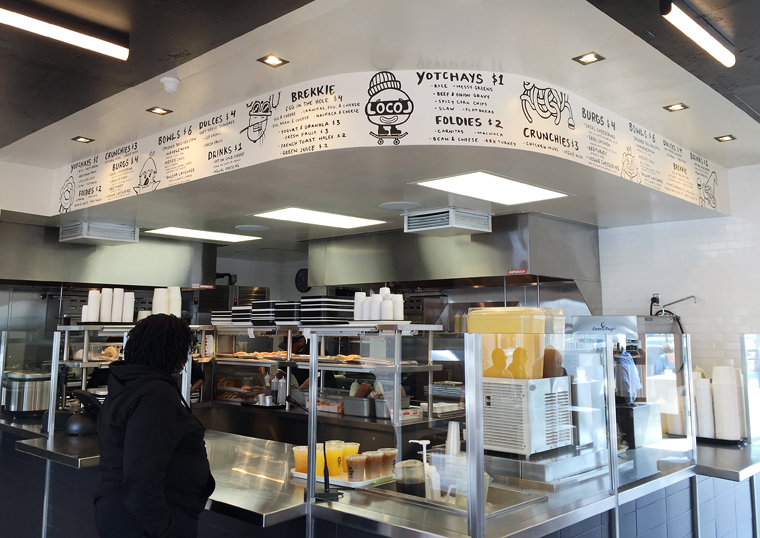 Locol has definite street attitude with its graffiti-like characters gracing the entrance and menu board.

Wraps are “foldies” here. Fried nuggets are “crunchies.” And the burgers are just “burgs.”

What you’ll notice from the get-go is that this food not only boasts vibrant flavor, but also noticeable texture, unlike at McDonald’s, where the food has been processed to oblivion. 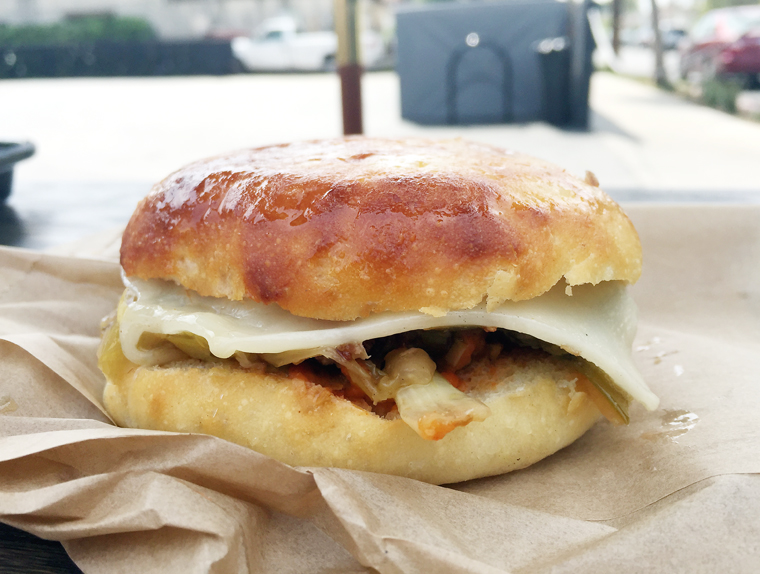 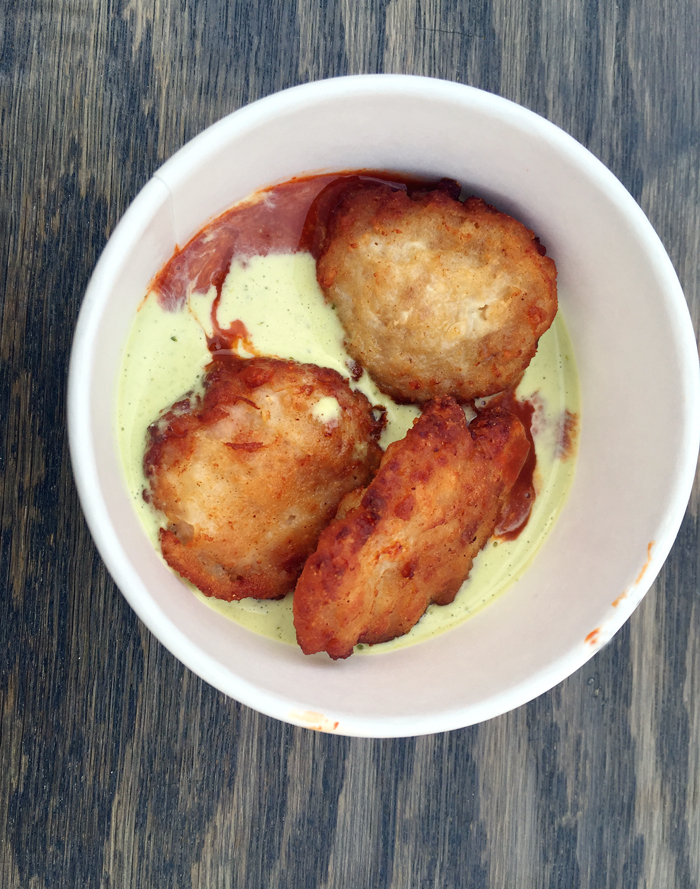 The Locol Cheeseburger ($4) is made with quality meat stretched a bit with the addition of grains to keep it so affordable. My husband, aka Meat Boy, liked the crisp edges of the patty, but found the interior slightly gummy. The burger is dressed with grilled scallion relish and a spicy tomato-garlic-gochujang concoction known as “Awesome Sauce.” The bun is a marvel — custom-made by San Francisco’s Tartine Bakery. It’s griddled until deeply golden. It has a softness like a potato bun, but is plenty sturdy on the exterior to handle the weight of the burger. It’s a modest-sized burger, and plenty filling.

The Chicken Nugs ($3) are fried chicken nuggets that have actual toothsomeness to them. They are served in a spicy pool of creamy green sauce and “Awesome Sauce.”

Housed in a plaza in Chinatown, the menu is all about noodle and rice bowls with sometimes unlikely ingredient pairings such as Korean kochujang pork belly with the Mexican cheese cotija. 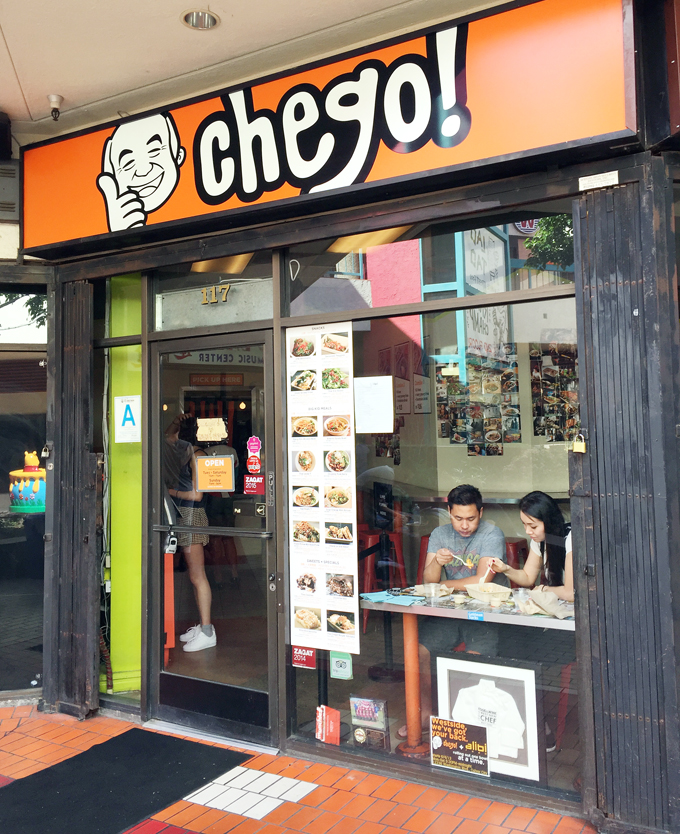 The colorful exterior of this tiny outpost.

The flavors are big and bold, and yes, addicting.

The chicken adobo ($8) is a mega bowl of tender chicken pieces bathed in a sea of sweet-tangy brothy sauce that the rice at the bottom practically drinks up. A fried egg crowns it all, along with fried shallots. 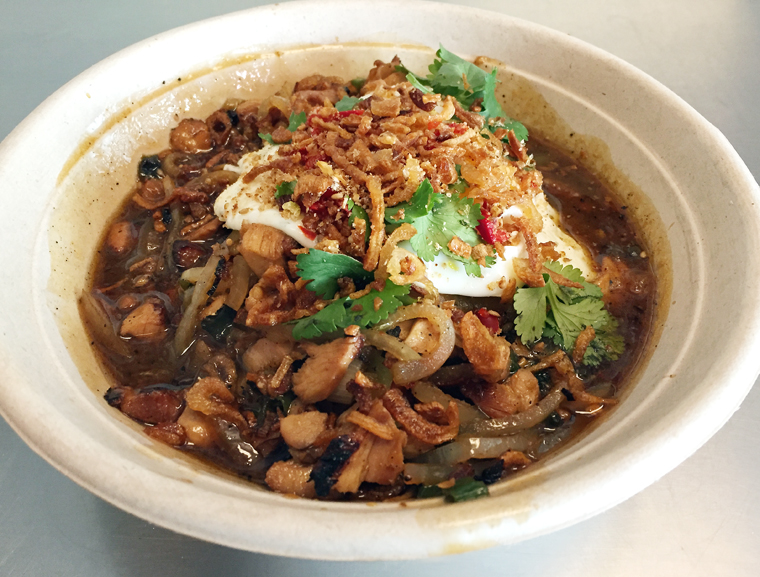 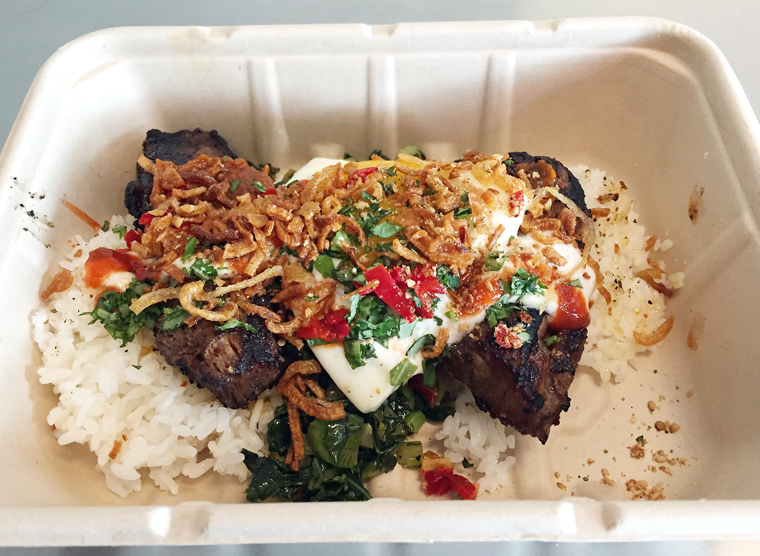 “Tiny’s Prime Rib Rice Plate” ($10) brings succulent beef, spinach, Chinese broccoli, roasted garlic puree and creamed horseradish over a mound of fluffy rice. Take a taste, and you’ll find yourself taking notes because now you know what to do with leftover prime rib the day after Christmas.

As a kid, I was fortunate enough to grow up on the iconic Blum’s coffee crunch cake.

My parents would often buy one for our birthdays or when company was coming over.

A tall sponge cake enveloped in shards of crunchy toffee, it was such a thing of beauty that when Blum’s closed, it became almost mythic, living on in dreamy memories until other bakeries would try to recreate their own versions.

What a treat to discover the one at Valerie Confections at the Grand Central Market. 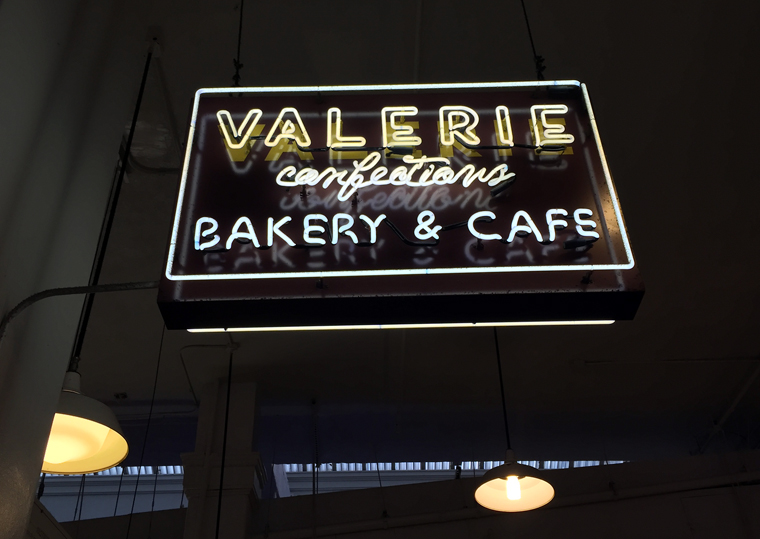 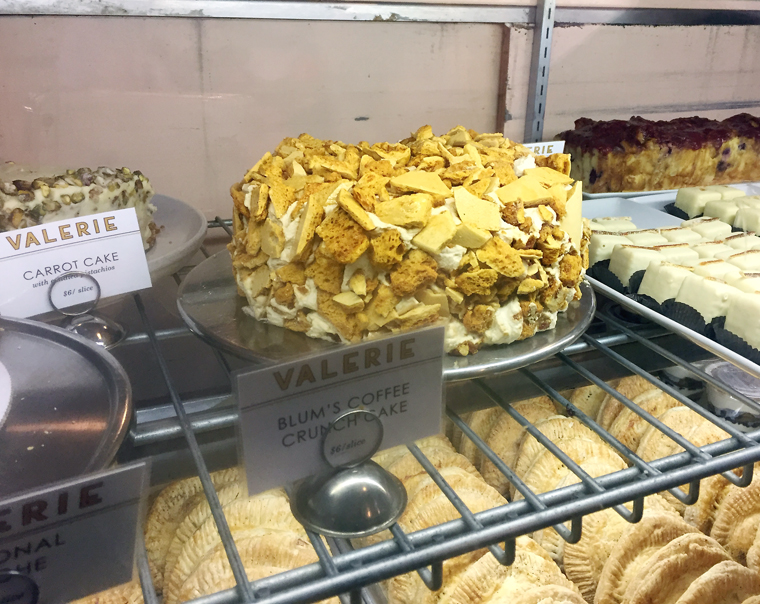 Eat it there, and your slice will arrive on a plate in all its glory.

Yes, you can order it by the slice ($6), though if you get it to-go, it does get a bit smushed in the take-out container.

Still, there’s no quibbling with how stupendous it is. The airy cake is thickly slathered in coffee whipped cream frosting. The big shards of toffee are more honeycomb-candy-like in texture than the original Blum’s version, but that’s not a bad thing. I actually prefer it because the toffee is still sticky-crunchy but more buoyant.

I think I inhaled half the slice even before I made it back to the car. It’s that irresistible.

The name, Bread Lounge, can’t help but make me think of as a place where hip breads go to relax.

If so, who wouldn’t want to go there, too, right? 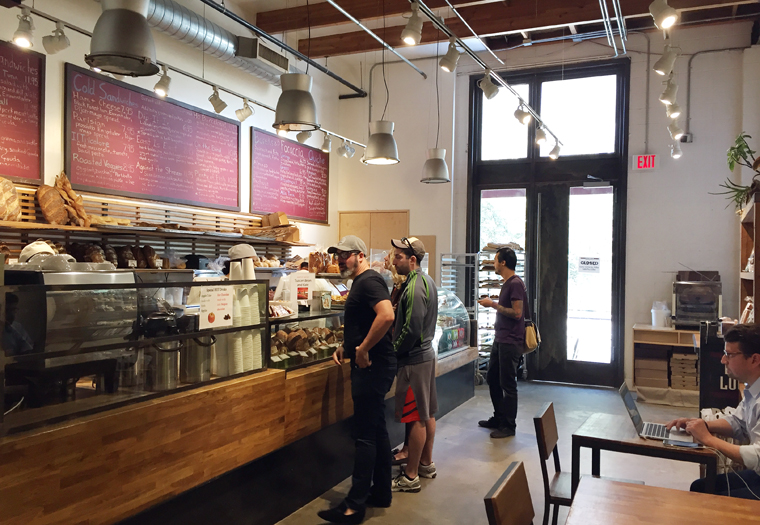 The artisan bakery does indeed specialize in breads. You can even peek in the window that looks into the production area to see loaves being hand-formed.

The potato rosemary loaf ($4.50) is pillowy and fragrant. The sunflower poppy seed loaf ($4.50) is hearty and pretty with its big striped swaths of seeds coating the exterior. The focaccia ($6.95) is almost like a pizza, shaped into a circle and topped with different ingredients. I had a delicious one with cherry tomatoes and feta. The focaccia itself was crisper and airier than many I’ve had elsewhere, and had a nice fermented bread flavor. Focaccia with tomatoes and feta. 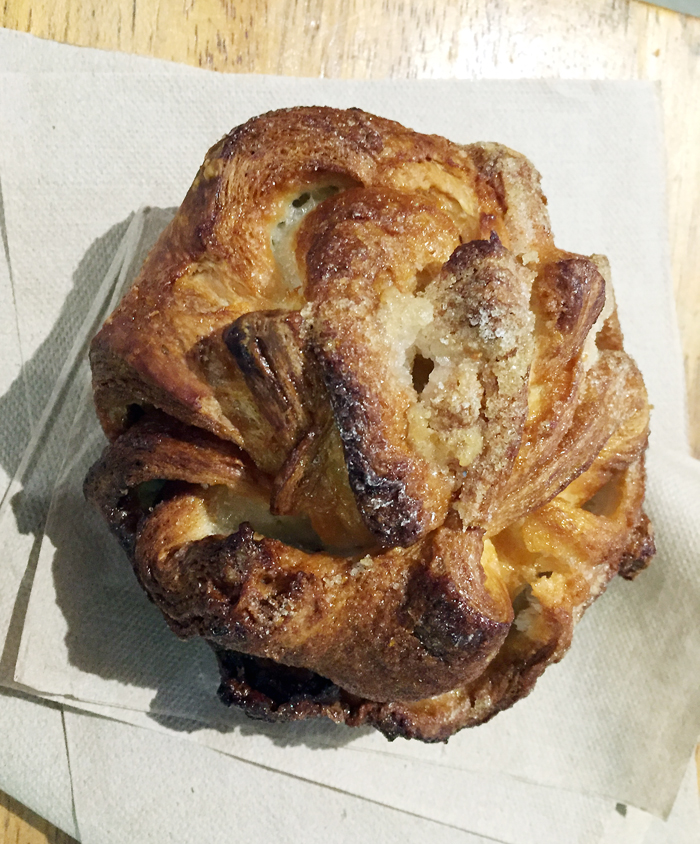 Kougn-amann — a big one at that.

The kouign-amann ($3.50) is huge — larger than my palm. It’s deeply burnished in color. It’s a denser, heavier version than the one at San Francisco’s B. Patisserie.

With locations in Santa Monica and Costa Mesa, these doughnuts are definitely worth the braving traffic for. The Chocolate & Rye ($3.25) doesn’t taste at all like your average, usually pretty humdrum chocolate cake doughnut. Instead, it’s like a slice of the very best chocolate cake — in doughnut form. It’s deeply chocolatey tasting thanks to a Callebaut chocolate glaze. There’s also added complexity from rye flour. It’s super moist, too, yet hefty enough to pick up with your fingers.

The Coconut Cream Pie ($3.75) dougnut is a signature, and for good reason. It’s a brioche doughnut hiding a center of coconut milk custard, and topped with coconut jam, coconut custard, toasted coconut shards, and crumbled pie crust. It’s not cloying, and a bit messy to eat, but sure worth every calorie. The display case at Sidecar Doughnuts. 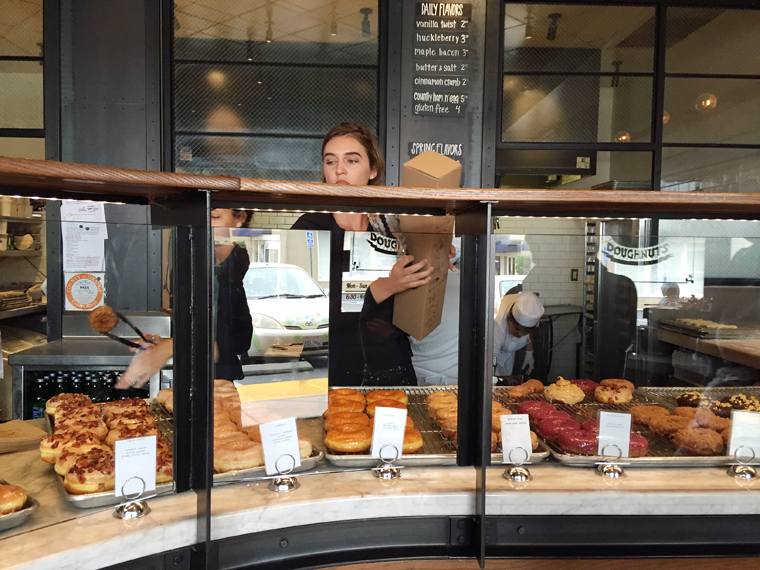 It’s hard to pick just one.

I can’t wait to go back to try more flavors — traffic or no traffic.

Have you made the acquaintance of the chocolate chip danish?

Apparently, it’s a pastry that can be found only in Jewish bakeries in Los Angeles.

I have food lover and blogger, Happy Go Marni, to thank for turning me on to this treat.

Marni lived in Los Angeles for many years, before recently moving back to the Bay Area. It was during her time in S. California that she discovered this singular sensation. Why it’s only made in Jewish bakeries in Los Angeles is a mystery. The one and only chocolate chip danish.

Because she recommended the one at the Beverlywood Bakery, that’s the one I tried.

Established in 1846, it’s the oldest bakery in Los Angeles. It feels old-school when you step inside with its non-nonsense, no-frills shelves and cases of baked goods.

The chocolate chip danish ($2.25) looks almost like a croissant-sized rugelach. It’s studded with tiny chocolate chips throughout its soft, almost bready layers. It’s much less teeth-rattling sweet than most other danishes.

It’s a perfect bite with coffee when you don’t want to be necessarily bouncing off the walls in the morning. 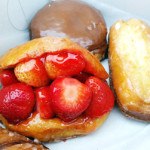 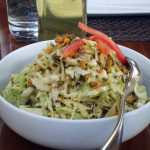 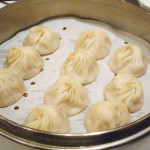 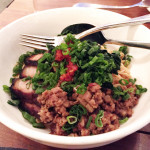 And: A Visit to Cassia