There are times when I can be pretty predictable. Case in point? If spaghetti or linguini vongole is on a menu, it’s almost a sure bet that I will order it.

First off, I buck the trend in being an unabashed carb lover. Second, clam pasta is a little lighter than a meaty ragu. Third, there’s just something so appealing about a big bowl of tender clams tossed with toothsome noodles that get coated in all those sweet, briny juices.

I’ve made quite a few versions of it at home over the years. But my new favorite has to be the one I saw in the Wall Street Journal last summer. “Spaghetti Vongole” is by Chef Nina Compton of Compere Lapin in New Orleans. If you’re a “Top Chef” fan, you may remember her as a contestant on Season 11.

I decided to give this recipe a try to take advantage of a sample of Manila clams delivered from Siren Fish Company, a community supported fishery that works with California and Oregon fishermen. Manila clams delivered to my doorstep from Siren Fish Company.

This is a classic preparation with garlic, parsley, olive oil and chili flakes. It does add a knob of butter toward the end of cooking to help enrich the sauce, give it a creamy texture, and make it really cling to the noodles.

The real genius touch, though, is the gremolata of minced parsley, lemon zest and garlic that’s added just before serving. In much the same way that gremolata adds that final fresh burst of garlic and citrus to give a lift to hearty, heavy osso bucco, it does the same here with this pasta dish.

It is spaghetti vongole perfection.

Juice and zest of 1 lemon

Bring a large pot of salted water to a boil over high heat.

Heat remaining garlic and olive oil in a large, lidded saute pan over medium heat. Saute garlic until aromatic but not yet coloring, about 2 minutes. Add onions and saute until translucent, about 4 minutes. Stir in chili flakes.

Meanwhile, lightly season onion mixture with salt. Increase heat to medium-high and add clams. Stir to coat shells and cover pan. Cook until clams just pop open, about 5 minutes. Uncover pan, remove from heat and discard any clams that remain tightly closed. Stir in half of the gremolata.

Once spaghetti is boiled and drained, return clams to stove over medium-high heat. Once hot, add spaghetti, a few splashes reserved pasta water and butter, and toss to form a creamy sauce, about 1 minute. If pan looks dry, add water until sauce coats noodles. Off heat, toss in remaining gremolata and season with lemon juice and salt.

From Chef Nina Compton as published in the Wall Street Journal, July 14, 2016 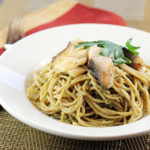 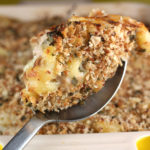 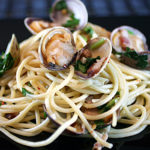 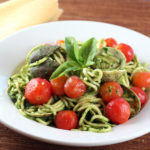 And: Smoked Linguine with Clams, Cherry Tomatoes and Basil Risotto from SPQR 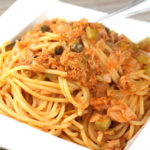 And: Spaghettini with Tuna and V8 Sauce by Hiro Sone and Lissa Doumani 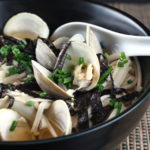 And: Steamed Manila Clams with Udon