A slice of heaven for Valentine’s Day.

Chocolate and long-stemmed roses signify Valentine’s Day to many.

For me, though, it’s all about banana cream pie.

You see, when I was dating my husband, he actually took the time and effort to make a banana cream pie for the first time just to surprise me. To understand how out of character that is, just consider that his nickname is Meat Boy, not Pie Boy. Grilling and smoking mega hunks of meat is second nature to him. But making pastries and desserts? Honestly, most times he’d rather eat a second helping of meat than end a meal with a sweet. So, when I saw him turn on the oven and pull out the butter, sugar and flour to mix the dough, it was a shock. A beaut of a pie.

What made it even more memorable? He made it and then took the cream pie proudly to my parents’ house to share with them.

I remember my Dad digging into a wide wedge heartily. He devoured every crumb. But only afterward did I notice he had left a tiny pile of banana chunks on his plate.

You see, unbeknownst to my husband or even to me, my Dad hated bananas. Who knew! After all, growing up, there were always bananas in our kitchen. I even remember my Dad making chocolate-covered frozen bananas for us in the summer. It was only after he had eaten all of the pie except for the fruit that he confessed his aversion. He never let on when my husband handed him a fork to dig into his handiwork. Nope, he just accepted the plate eagerly without a fuss. Now, that’s love.

Is it any wonder then that banana cream pie holds such a special place in my heart now?

It symbolizes when the two most important men in my life each tried their best to make a good impression — and succeeded so sweetly.

As a result, when I was mulling over what to make for Valentine’s Day, I hit on the perfect treat when I spied “Roasted Banana-Peanut Butter Cream Pie.” It’s from the new cookbook, “Marbled, Swirled, and Layered” (Houghlin Mifflin Harcourt), of which I received a review copy, by San Francisco photographer and recipe developer Irvin Lin of the ever-popular blog, Eat the Love. His are some of the most creative dessert recipes I’ve come across in a long time. Imagine goodies such as “Sparkling Dark Chocolate and Raspberry-Cream Cheese Chewy Cookies,’’ in which you make two different doughs, then take two balls of each kind, and roll them together to create a unique marbled effect for each cookie. Or “Salted Caramel Popcorn Double-Chocolate Brownies,’’ in which brownies are indeed slathered with caramel before being topped with actual popcorn. Or “Apple-Cinnamon Coriander Swirl Cobbler,’’ in which the layer of baked fruit is not crowned with simple drop biscuits but by spiraled cinnamon rolls. Given their complexity, Lin’s recipes understandably take more time and steps than average.  But if you are willing to do a little extra work, you are well rewarded in the end with treats that are true show-stoppers.

What makes this banana cream pie unusual is the addition of peanut butter. It’s both in the crust and in one of the fillings. It makes for an extra decadent pie. The recipe says it serves 8, but you could easily cut smaller slices to feed 10 to 12, because that’s how over-the-top rich it is. Roasting the bananas intensifies their flavor.

The pie is certainly peanut butter-forward. But the bananas do not get lost in it, especially because they are first roasted to intensify their flavor. These cooked bananas are then whisked with brown sugar, rum, cream, milk, butter and eggs to create the first filling, which is baked in the crust. Once the pie is cooled, a second filling is added on top, consisting of cream cheese, peanut butter, cream and sugar. Then, the pie goes in the fridge for a couple hours to firm up. After two hours it will be soft, but stand up to slicing. If you refrigerate it overnight, it will firm up more. Just before serving, arrange sliced bananas on top that have been tossed with a splash of rum.

This is a fluffy, mousse-y pie. Because the two fillings are fairly similar in color, there won’t be a clear delineation between the two when the pie is cut. But they definitely have distinct flavors — one accentuates banana, the other peanut butter. The pie is actually not cloying, thanks to the peanut butter that tempers the sweetness. It’s a classic old-fashioned taste given a voluptuous reboot.

My Dad would have probably picked off the bananas from the top. Since bananas are also pureed into the filling, though, he would have been at a lost there. But something tells me that had I or my husband made this pie for him, he would have succumbed to its charms, as well.

After all, you do that for a true taste of love. Who put peanut butter in my banana cream pie? Irvin Lin did.

Make the Peanut Butter Crust: Combine the flour, brown sugar, and salt in a large bowl. Cut the butter into 1/2-inch cubes and sprinkle over the dry ingredients. Using your fingers and hands, first toss the butter in the flour, then smash the cold butter into thin slivers, breaking them up as you go. Making sure your hands are covered with flour, add the peanut butter and cover with flour. Gently squeeze the peanut butter into the flour with your hands, making sure to keep it completely covered in flour. Continue until it is worked into the flour and is in small pieces. Once both the butter and peanut butter have been broken and flattened into small bits the size of peas, sprinkle in 4 tablespoons of the water. Toss with a fork until the dough starts to come together. If the dough seems really dry, add 1 to 2 more tablespoons water. Massage the mass with your hands until it forms a cohesive dough. Flatten into a disk about 1-inch thick, wrap tightly with plastic wrap, and refrigerate for at least 1 hour.

Roll out the dough into a 12-inch circle on a surface liberally sprinkled with flour. Fit into a 9-inch pie pan, pressing the dough so it drapes over the top edge of the pie pan, anchoring it to the top of the pan. Prick the bottom of the dough with a fork. Line a piece of parchment paper and fill with dried beans, uncooked rice, or pie weights. Bake for 20 minutes. Remove the paper with the pie weights and bake for an additional 15 minutes. Let cool on a wire rack while you make the pie filling.

Peel the roasted bananas and place them in the bowl of a stand mixer fitted with the whisk attachment. Add the brown sugar and rum and mix on medium-high speed until the bananas are pureed. Place the cream, milk, granulated sugar, cornstarch, salt, eggs, and vanilla in a large pot. Stir briskly with a balloon whisk until the dry ingredients are dissolved and the eggs are incorporated. Cook over medium heat, stirring constantly, until the custard has thickened and boiled, about 5 minutes. Remove from the heat, add the butter, and stir until melted and incorporated. Fold in the banana mixture and the cinnamon, then spread the filling over the cooled pie crust. Refrigerate to firm up, about 1 hour. Place the cream cheese on the counter to come to room temperature while the banana filling is chilling.

From “Marbled, Swirled, and Layered” by Irvin Lin 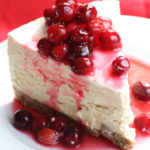 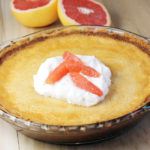 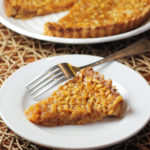 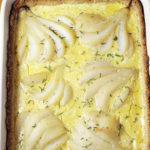 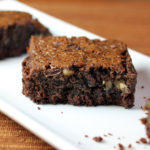 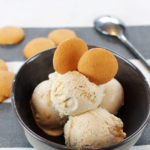 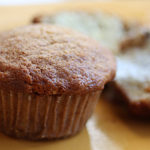 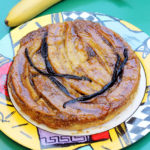 And: Banana Polenta Upside Down Cake 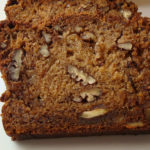 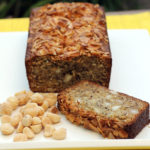