Brownies? Or blondies? Whatever you call them, they are the bomb!

What’s in a name? Well, would you believe these are blondies?

In my world, just by appearance alone, these are brownies.

But in the first cookbook by Burlingame’s bean-to-bar chocolatier Guittard, these are indeed blondies. “Chocolate Banana Blondies” to be exact.

No matter how you refer to them, you will be calling them ravishingly good after one bite. 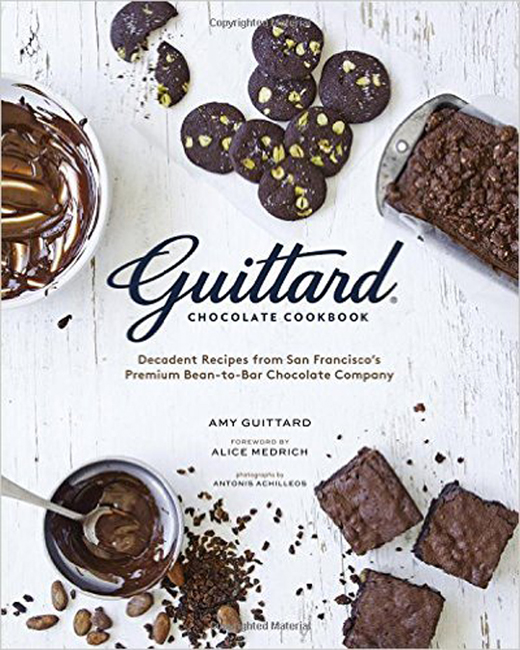 You probably know its baking products from store shelves. If you’re a See’s Candies fan, you also know Guittard because it supplies the chocolate that goes into all those homespun bonbons.

If you are a craver of chocolate, you will salivate over this cookbook. No doubt you’ll want a copy for yourself and to give to all your chocoholic friends this holiday season. The book encompasses 60 recipes, from the simple to the slightly more involved, from “Chocolate-Dipped Graham Cracker-Rolled Marshmallows” to “Chocolate Mousse Pie.” One thing’s for certain: You will be desperately jonesing for chocolate after you leaf through this book.

These brownies, er, blondies look innocent enough, don’t they? But they hide so much more than you think. There’s the chocolate cookie crust. Then, a fudgy-chewy chocolate filling made with soft, sweet bananas, bourbon and walnuts. And finally, there’s a flourish of sea salt and crunchy cacao nibs strewn over the top.

You take a bite, thinking it’s just an ordinary brownie, er, blondie. But the taste you get is like that perfect spoonful from a banana split, in which it’s banana-y, chocolaty, and a little vanilla-like. Only in this case, you also get that subtle earthy bitterness of cacao nibs, too.

You tell yourself you can’t possible eat an entire bar. But of course, you do — and then ponder a second one.

Amy Guittard calls them blondies because they start with a base of butter and brown sugar. I call them deep, dark and rich — everything you want in a great brownie, um, blondie.

All I can say is that semantics has never been so seductive. 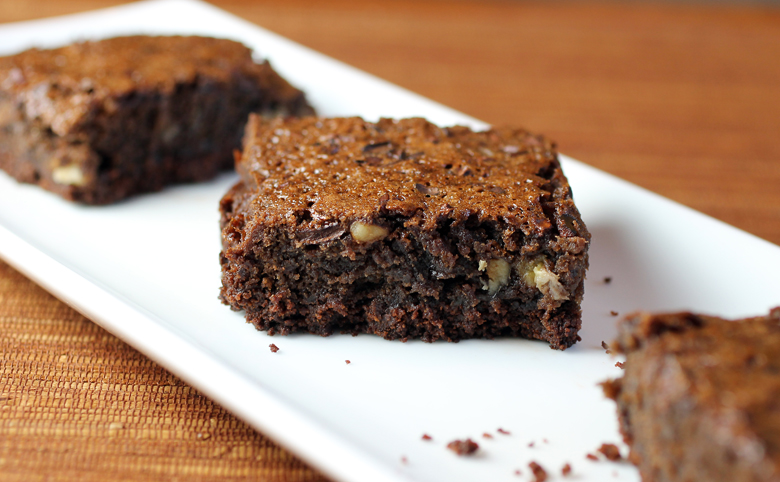 There’s so much more than chocolate to this.

To make the crust: Preheat the oven to 375 degrees. Butter a sheet of parchment paper, then use it, butter-side up, to line a 9-by-13-by-2-inch baking pan.

Using a food processor, pulse the chocolate wafer cookies to fine crumbs. Add the melted butter, brown sugar, and salt. Process until the mixture is the consistency of wet sand. Pour the crumb mixture into the prepared pan and use your fingers to push the mixture down and spread it evenly over the bottom of the pan to form a crust.

Bake for 7 to 10 minutes, until set. Remove the pan from the oven and set on a wire rack to cool.

To make the filling: Lower the oven temperature to 350 degrees.

In a medium saucepan, melt the butter over low heat. Let the butter cook until the foam subsides and the butter turns brown, about 5 minutes. Set aside.

In a small bowl, combine the flour, slat, and cocoa powder. Set aside.

In a large bowl, with a hand mixer, beat together the bananas, bourbon, eggs, vanilla, and brown sugar. Beat in the brown butter until combined. Fold in the flour mixture and walnuts.

Pour the filling over the cooked crust and spread it evenly. Sprinkle with the cacao nibs and fleur de sel.

Bake for 45 to 55 minutes, or until a toothpick inserted into the center comes out clean. Let cool completely in the pan. When ready to serve, invert the pan on a cutting board and rap the pan on the surface until the blondies release from the pan. Peel away the parchment and discard. Cut into 3-inch squares. Store wrapped tightly in plastic wrap at room temperature for up to 5 days. To freeze, cut into four large sections and remove from the pan. Wrap the sections tightly in plastic wrap. Place the sections in a zip-top freezer bag and push out all the air. Freeze for up to 1 month. Let the wrapped sections defrost in the refrigerator overnight.

Note: To toast nuts, preheat oven to 350 degrees. Line a baking sheet with parchment paper, spread the nuts out on the parchment paper, and bake for 8 to 10 minutes, until you smell the nuts toasting and they have slightly darkened in color. Be sure to check on the nuts often while they are toasting, because they burn easily. 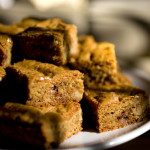 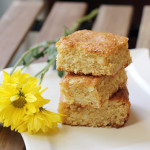 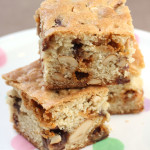 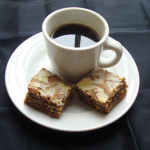 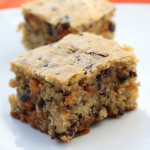