Rare is the restaurant where you sit down to an entire meal and never experience one mundane bite.

Izakaya Rintaro in San Francisco’s Mission District is such a place.

That was my experience a week ago, when I tried the Japanese small plates restaurant with my husband, where we paid our full tab at the end of a delightful dinner.

Izakaya Rintaro was opened two years ago by Chef-Owner Sylvan Mishima Brackett, who was born in Kyoto. Early on in his career, he was Alice Waters assistant at Chez Panisse. When I was a food writer on staff at the San Jose Mercury News, I would call him incessantly, in need of quotes regularly from Waters, which he remembered. 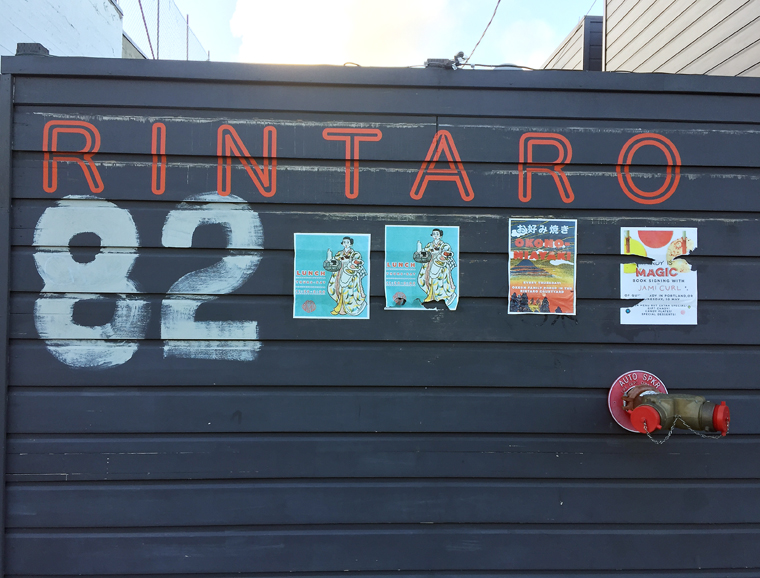 The front of the restaurant. 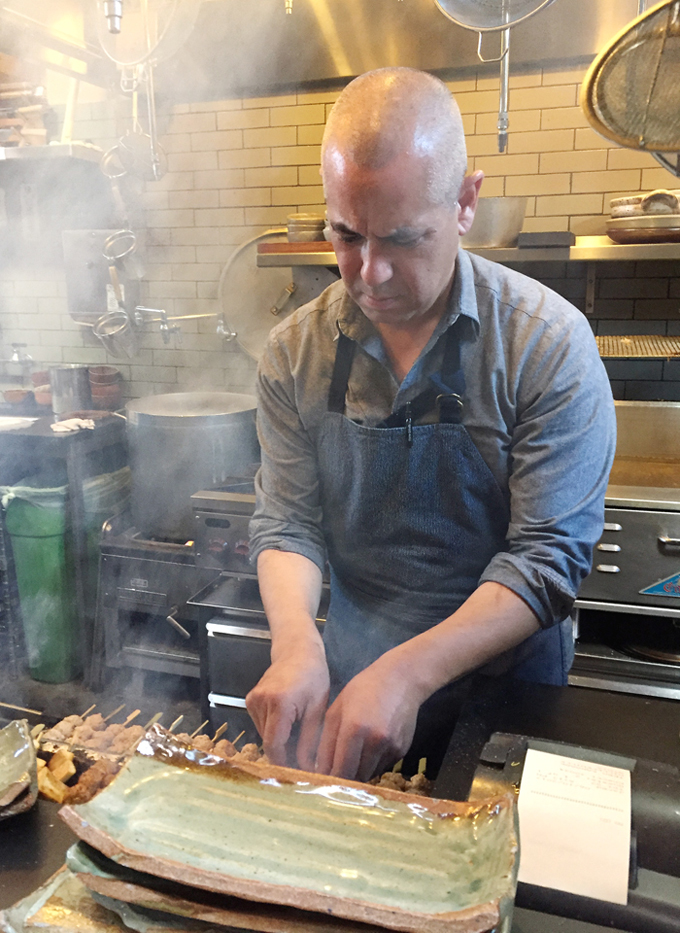 At his izakaya, you’ll find the usual staple dishes and more. What truly sets them apart are the top-notch ingredients, detailed techniques, and flat-out care with which they are executed.

The restaurant, with its bamboo-fenced courtyard and simple natural wood exterior, looks like it could have been transplanted from Japan. It was crafted by Brackett’s father, using traditional building methods. You can sit in one of the airy, wood-framed booths, or do as we did, which is sit at the cedar bar, configured from one single slab of ancient wood. If you sit near the yakitori grill like we did, you will get a bird’s eye view of all the action. But just be warned, you and your clothes will end up smelling a bit like eau de smoke. 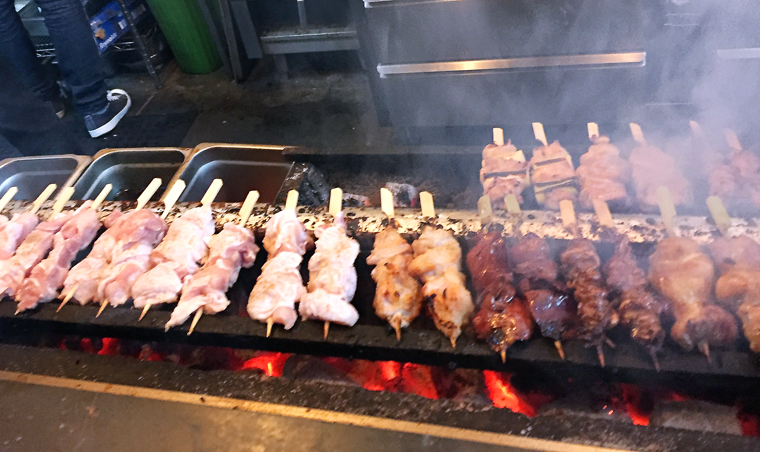 A close look at the grill.

There is a concise list of sake, beers, wines, and even non-alcoholic sips such as a house-made ume and lemon soda. I opted for a Matcha Chiu-Haj ($11), a vivid glass of jade-green matcha blended with shochu on ice. It was grassy, slightly astringent, a little sweet, and a fun way to enjoy green tea on a warm night. 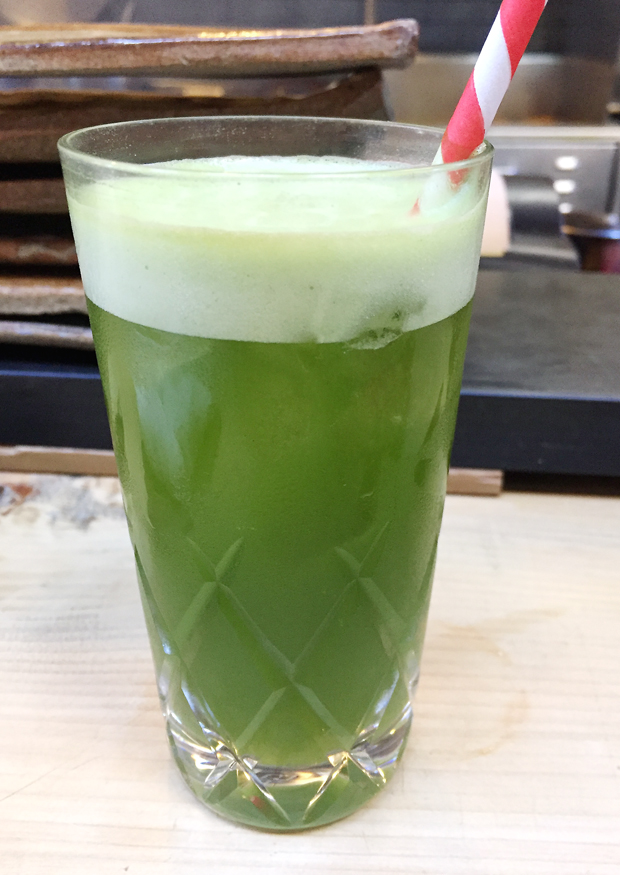 We started with sashimi ($20), a mix of San Pedro Bay Big Eye Tuna and San Francisco swordfish, served with real wasabi, grown in Half Moon Bay. The slices of raw fish were as fresh as can be. The real surprise was the swordfish, which I had never eaten raw before. When cooked, it is meaty and lean tasting. But when raw, swordfish is surprisingly rich and fatty tasting. 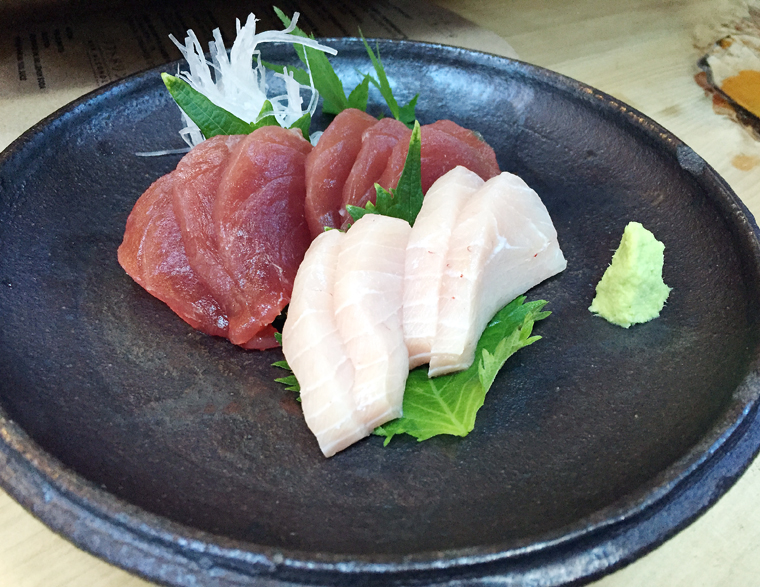 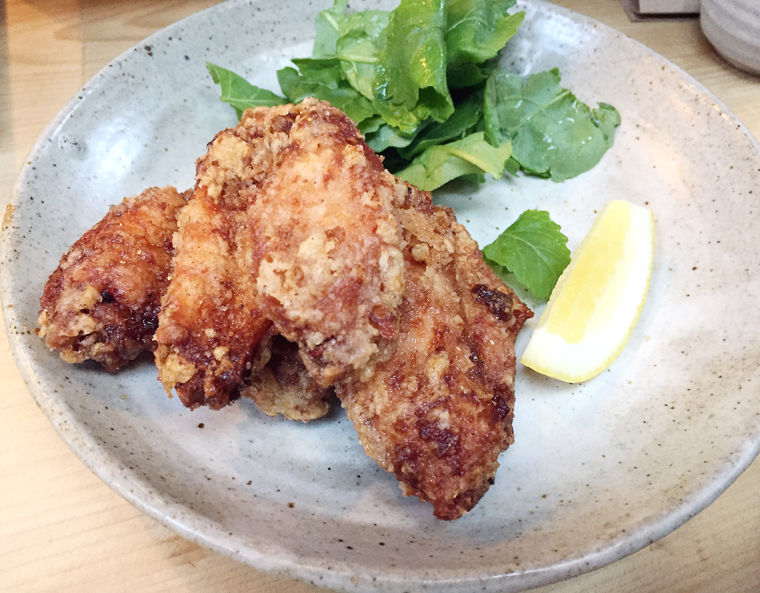 Sitting so close to the charcoal-fueled grill, we had to order some yakitori, of course. The King Trumpet mushrooms were wonderful, the smokiness from the grill really complementing their inherent sweet earthiness. The BN Ranch ribeye ($12) was juicy with a big beefy taste. The chicken thigh with citrusy sansho pepper seasoning ($8) was tender with nicely caramelized flavor.

Japanese fried chicken wings ($12) arrived so hot you could barely pick them up for a couple of minutes. The fry on them was masterful, resulting in skin that was shatteringly crisp and deeply bronzed. On the side was wasabi arugula. Yes, big leaves of arugula that had the jolting taste of wasabi. 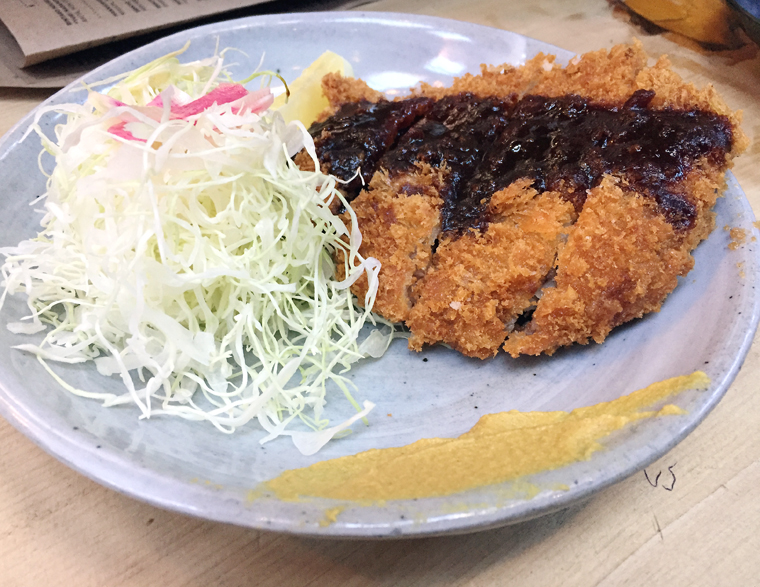 Not your typical tonkatsu. 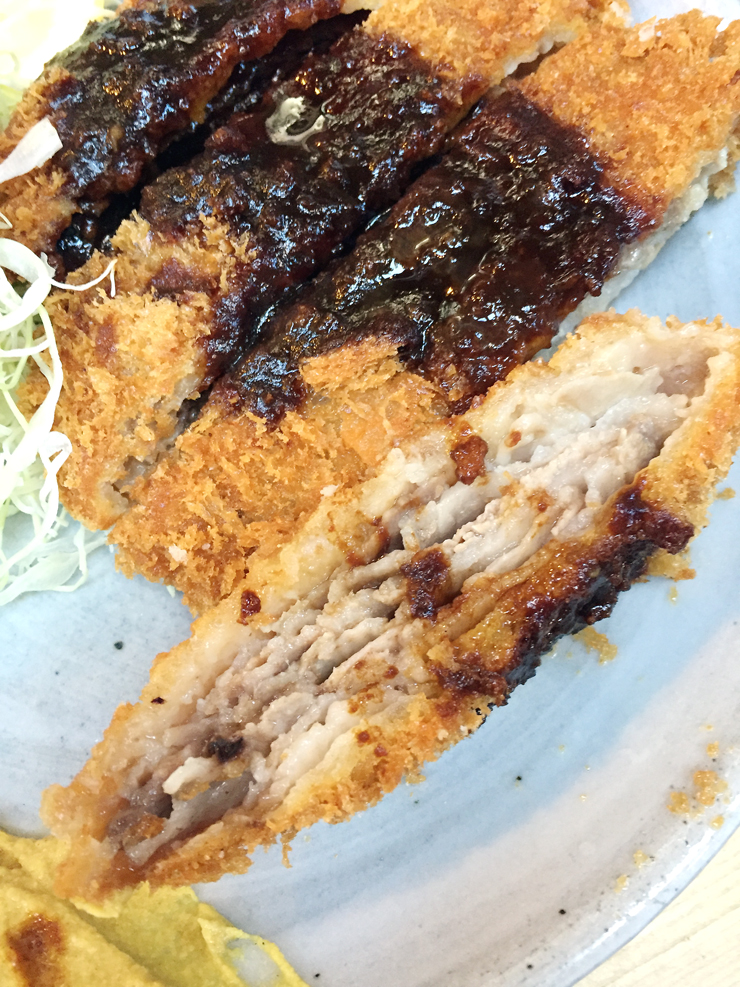 Just look at the layers of pork.

The Millefeuille Miso Katsu ($16) is like any kind of tonkatsu you’ve had before. Instead of just a flattened slab of pork that was breaded and fried, 10 thin layers of Becker Lane pork were actually stacked atop one another before being dredged in panko (made from Acme bread, no less), and fried. Whereas typical tonkatsu takes some chewing to get through, this millefeuille method resulted in a version that was so much easier to bite through. It was also much juicier, too.

The Hanetsuki gyoza ($14) are not to be missed. I am still dreaming about these because these are unequivocally the best I have ever had. They are stuffed to the gills with ginger-scented pork. But what really sets them apart is how juicy they are — almost on par with Chinese xialongbao (soup dumplings). And that’s saying something. Because Brackett makes them with chicken foot jelly, these gyoza drip juice from the first bite. 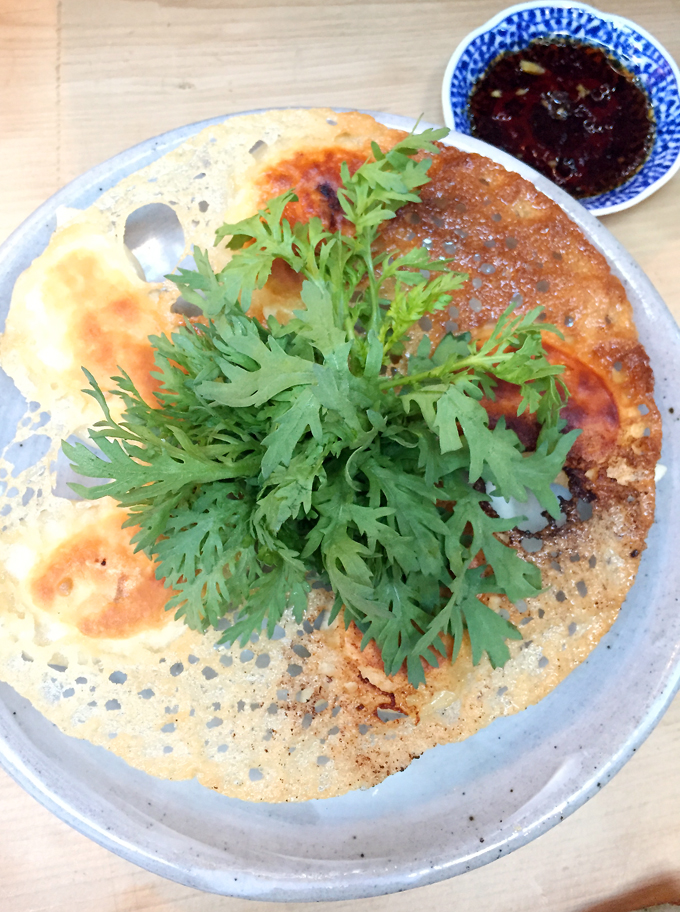 Absolutely, the best gyoza I’ve ever had.

The restaurant makes its own hand-rolled udon, which are showcased a couple of different ways. We had the Kama Tama Udon ($12), which is a riff on carbonara. The thick, chewy, slippery noodles are mounded in a bowl, and topped with a raw Riverdog Farm yolk the color of a sunset, butter, ginger, scallion, and freshly shaved katsuobushi. Take your chopsticks, puncture the yolk, and mix everything up, and you will indeed get a Japanese version of carbonara with a briny bite. 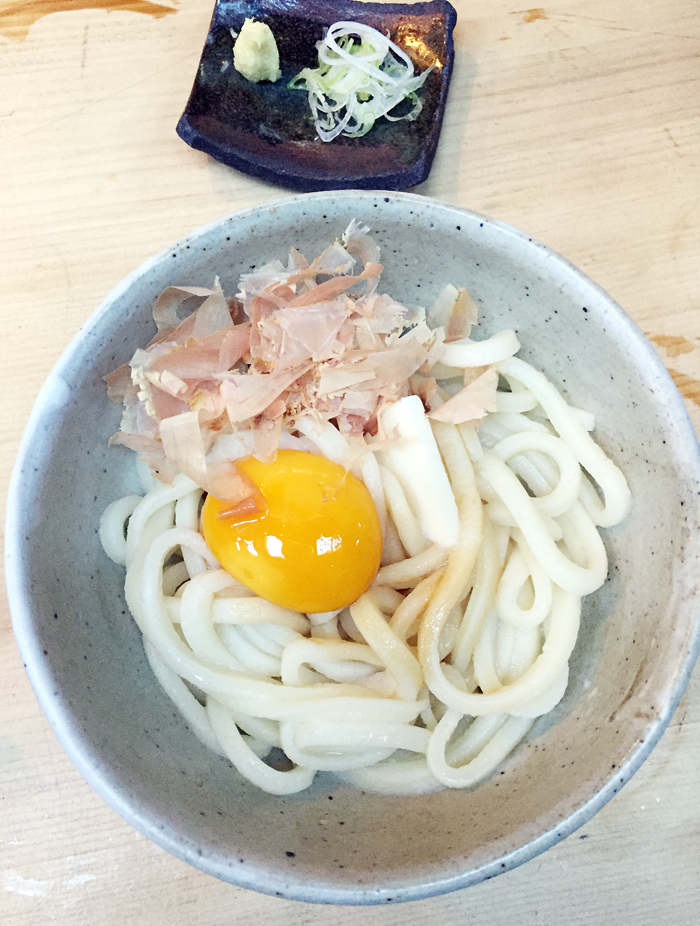 For dessert, we went with the Choco-Miso Keiki ($12), a deeply chocolate-y mousse tart with the texture of ganache. Although it is made with miso, it’s pretty hard to detect it. Alongside were sugared blueberries and brandy-soaked cherries, along with a fluff of softly whipped cream, to help cut the richness of this decadent dessert. A rich chocolate ganache-like tart made with miso.

We happily finished every bite, and long to come back to eat our way through the entire menu. Izakaya Rintaro seduces in just that way. 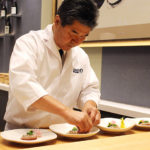 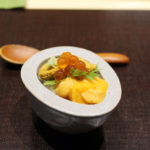