That’s because the massive hotel kitchen will undergo a four-month renovation this winter. As a result, the next “Taste of Yosemite” will actually happen again this year — in November 2018. With last winter’s onslaught of rainstorms, the waterfalls are a gushing this year in the park.

The usual six sessions (with three different chefs spotlighted at each one) will be truncated to just four sessions, taking place Nov. 4-16. The line-up of chefs for November should be posted online by about May 2018.

After that, the event will return to its usual January rotation, starting in 2020. 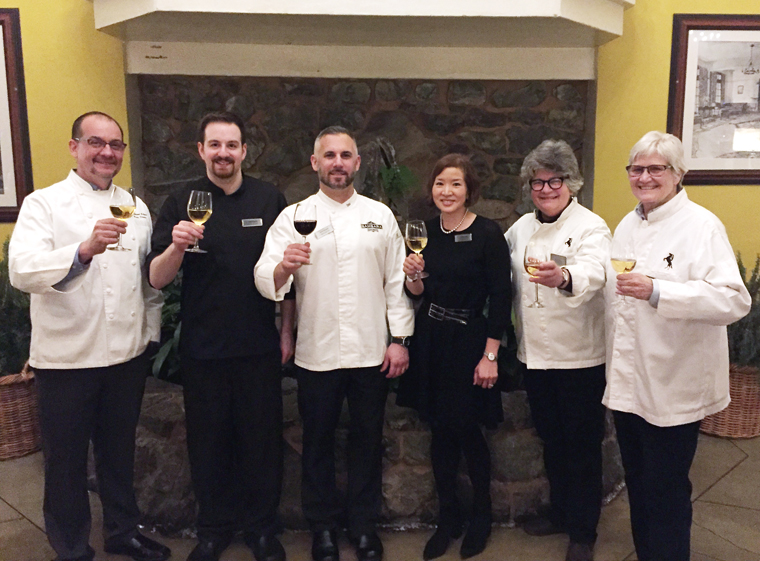 This year’s first session featured Brian Streeter, the culinary director of Cakebread Cellars in Rutherford; everyone’s favorite Peggy Smith and Sue Conley of Cowgirl Creamery in Pt. Reyes and San Francisco; and Chef David Bazirgan, making a return to California after he left his post at Dirty Habit in San Francisco to return to his native Cambridge, MA to head Bambara restaurant.

When it comes to pairing wine with food, Streeter talked about how he tries to match the weight of each, choosing a heavy, concentrated wine with a hefty entree, and a lighter, typically white wine with a dish that’s light and fresh tasting.

Brian Streeter getting ready for his demo with — what else — Cakebread Cellars vinegars. For instance, for a dish of “Smashed Potatoes with Crescenza Cheese and Maitake Mushrooms” that he demonstrated, he recommended a glass of Cakebread Chardonnay Reserve with it. That wine would work equally well with the second dish he made, “Shrimp and Grits with Andouille Sausage.” 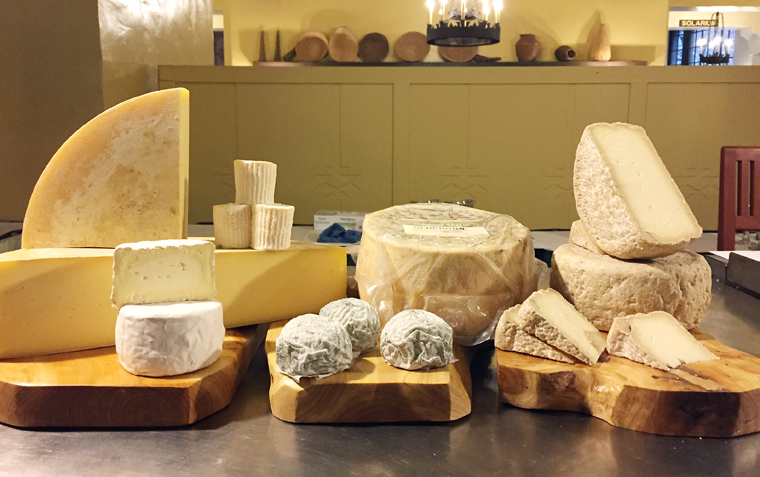 Smith and Conley took the audience through a tasting of artisan cheeses with their usual wit and charm. If you’re ever at a loss as to what cheese to bring to a party, go with a sheep’s milk cheese, they recommended, because it is sweet and nutty enough to go well with most wines.

Bazirgan showed how easy it is to make your own hummus, eggplant puree, and cashew romesco at home, while leaving the audience laughing as he admitted his first stop upon arriving back in the Bay Area was to In-N-Out for a Double-Double. The five-course gala dinner, with paired wines, was prepared by Bazirgan, who impressed even some of the other visiting chefs when he decided to make loaves of braided bread dusted with za’atar for each table. 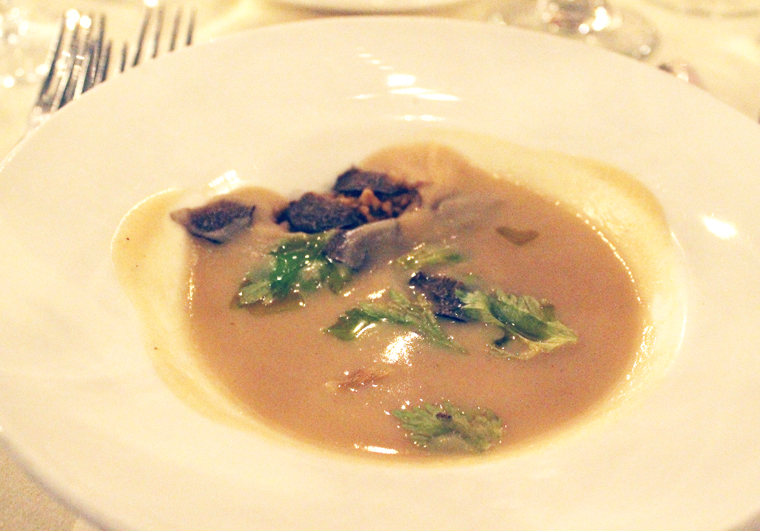 His feast began with celery root and apple soup, its sweetness given an earthy, exotic back note with Madras curry, and black truffle.

Next, seared scallops with marmalade made of endive, of all things. Cashew muhammara added a nutty spiciness. The sauce was an intriguing blood orange-foie gras sauce, which was bright with citrus but emboldened with the faint gamey, minerality of the foie gras.

Kabocha squash risotto had the perfect texture, spilling loosely onto the shallow bowl. It was crowned with meaty Maitake mushrooms, and a sherry gastrique that really woke things up. Spanish Idiazabal cheese added even more creaminess. Now, that’s a piece of pork. 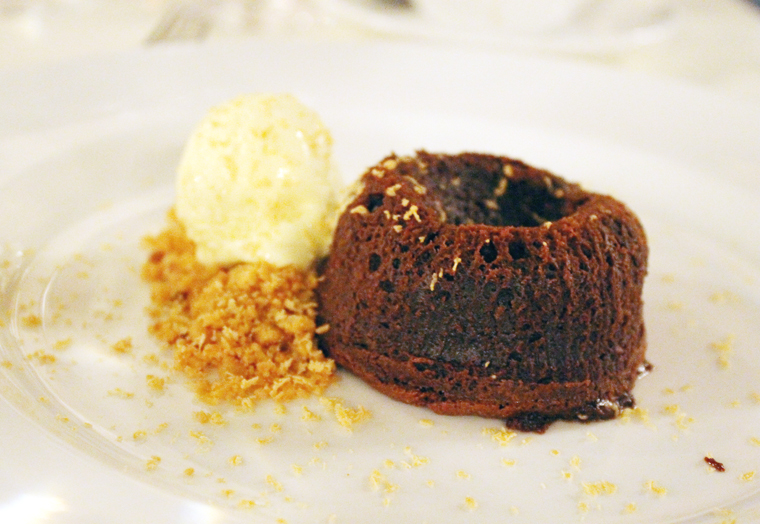 Then, the piece de resistance — thin slices of roasted porchetta with a fabulously crisp, paper-thin golden skin. Alongside were potatoes that had been cooked in pork fat. A small heap of sauerkraut and a mustard seed relish kept everything in check so that the dish didn’t get overwhelmingly rich.

For dessert, the classic warm chocolate lava cake got an inspired touch with tangy passionfruit ice cream, a smear of roasted white chocolate on the bottom of the plate, and crunchy macadamia nuts. (Left to Right): Lily Fox, Jason Fox of Commonwealth, yours truly, Annie Sommerville of Greens, and Evan and Sarah Rich of Rich Table and RT Rotisserie.

Then, it was on to Session 2 with Chef Jason Fox of San Francisco’s Commonwealth, who brought along the world’s best sous chef — his 9-year-old daughter, Lily, who actually whispered a couple of reminders to him during his demo; Chef Annie Sommerville of Greens in San Francisco; and Chefs Sarah and Evan Rich of Rich Table and RT Rotisserie, both in San Francisco, who were accompanied by their Chef de Cuisine Brandon Rice.

Rich Table is all about eye-opening combinations of ingredients, and the demo by the Riches and Rice showed that in dishes of “Duck Fat Madeleines with Dill and Yogurt” and “Brussels Sprouts with Caesar Dressing.” Chefs Evan and Sarah Rich of Rich Table getting ready to start their demo.

With Rich Table garnering its first Michelin star just a few months ago, Sarah and Evan Rich recounted a hilarious story about how they got the news. When the Michelin folks called to inform them of their achievement, Evan was in the shower, and Sarah was pedaling on an exercise bike in their home.

Evan raced over to grab the phone, then ran excitedly to Sarah, as he put the Michelin folks on speaker. All the while in the buff. After the jubilant couple hung up the phone, Sarah looked over at her husband, and said, “Uh, maybe you should put some clothes on?” As Evan told the audience, “Some chefs actually take photos of themselves getting the phone call. Obviously, we weren’t going to do that.” Chef Jason Fox of Commonwealth, with an assist from his daughter Lily. Thin slices of butternut squash rolled up around a creamy, cheesy filling made with burnt hay and scallions.

Fox, who also has a Michelin star at Commonwealth, assured that he was not naked when he got notified the first time of the honor. Instead, he was headed to work, fully clothed. Afterward, he called his wife to tell her the news, and the whole staff went to a bar that night after work to celebrate.

At his demo, he showed his creativity in dishes of “Butternut Squash with Fromage Blanc, Burnt Hay, and Tangerine” (in which he actually did smoke hay with green onions before blitzing it into the creamy cheese), and “Seared Scallops with Popcorn Puree and Yuzu Koshu Butter.” Still, daughter Lily, let it be known that her favorite food that her dad makes for her is togarashi potato chips. Chef Annie Sommerville holding up some of her favorite ingredients. Pioneering Greens restaurant has been at the forefront of upscale vegetarian cuisine ever since it opened in 1979. Sommerville’s simple dishes really let the flavors of the ingredients shine through in “Italian Butter Bean Soup with Parmesan Croutons” and “Warm Cauliflower Salad with Pine Nuts, Crisp Capers and Creamy Tarragon Dressing.”

For the gala dinner, the Rich Table chefs pulled out all the stops, creating a five-course repast of generous portions and astounding combinations. Burrata is one of my favorite cheeses. It has a mild personality, but is so decadently creamy. In the first course, it definitely took on Beyonce proportions with a brash, bold topping of tikka masala crisp bread crumbs, olives and fresh mint.

Creamy squash soup also reached new heights with the addition of miso, giving it a kick of extra savoriness.

Next, the Riches showed off the chicken from RT Rotisserie by layering it in a lasagna. For added fun, they garnished it with the four sauces for the roast chicken that they offer at the restaurant: Nanny’s barbecue, a spicy chipotle yogurt, creamy chimichurri, and the haunting douglas fir sour cream with its beguiling hints of citrus and pine. Lasagna made with RT Rotisserie chicken. Short rib crowned with — of all things — unagi.

That was followed by one of the most mind-blowing takes on surf and turf: short ribs with unagi. I kid you not. The chunk of beefy, tender short rib got blanketed with a piece of Japanese grilled eel, all slicked with a sweet, sticky soy sauce-like sauce. Alongside was a mound of Robuchon potatoes. Yes, the incomparably smooth mashed potatoes with as much butter whipped into it as humanly possible, made famous by the legendary French chef. A “Creamsicle” for the ages.

Dessert was “Cali Creamsicle.” As one diner at my table dug into the bowl of vanilla ice cream, mandarin granita, douglas fir toffee bits, salted citrus, and microgreens, she kept shaking her head, “This is the weirdest thing. The weirdest. But it’s so good!” Indeed, it was a dessert that was sweet, salty, herbaceous, creamy, icy, and crunchy. It was light and refreshing, and even verging on savoriness. It was unlike anything any of us had ever had before. Every spoonful was a little different than the last. And we kept going back for more until nothing was left.

It just shows that at “Taste of Yosemite,” your taste buds are always in for a tantalizing time. 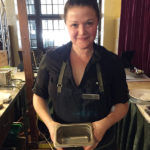