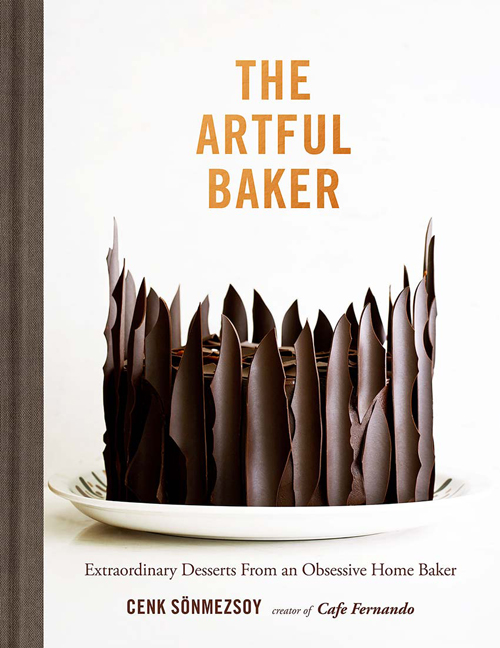 The world is definitely more delectable as a result. Browned butter takes the place of walnuts in this cake. “The Artful Baker” is lavishly photographed and includes more than 100 recipes. I don’t know if one can gain weight just by looking at photos, but this book actually makes that seem possible.

Just try to tear yourself away from “Vanilla Bean Meltaways” (thick butter cookies showered in sugar with a tiny plastic figurine wielding a vacuum cleaner to seemingly clean up the excess in the photo), “Matcha & Pistachio No-Bake Cheesecake” that’s the haunting green hue of moss growing on a cliff, and “Brownie Wears Lace” in which brownies are gilded with blond chocolate ganache frosting, before bittersweet chocolate is piped all over the top in a delicate lace pattern.

It’s a book that’s a feast for the eyes as well as the stomach.

Sonmezsoy writes that he decided to make this cake without walnuts because the baking powder, which helps give the cake its lovely tenderness, turned them an unsightly black color. That’s why he decided on the genius idea to add browned butter instead.

The batter for this cake is loaded with grated carrots, a little unsweetened dried coconut, and just enough cinnamon and grated fresh ginger to add the perfect warm depth. The cakes cooling after baking.

The frosting is made with cream cheese, of course, but also includes blond or white chocolate, which makes it all the more velvety, luscious and luxurious. 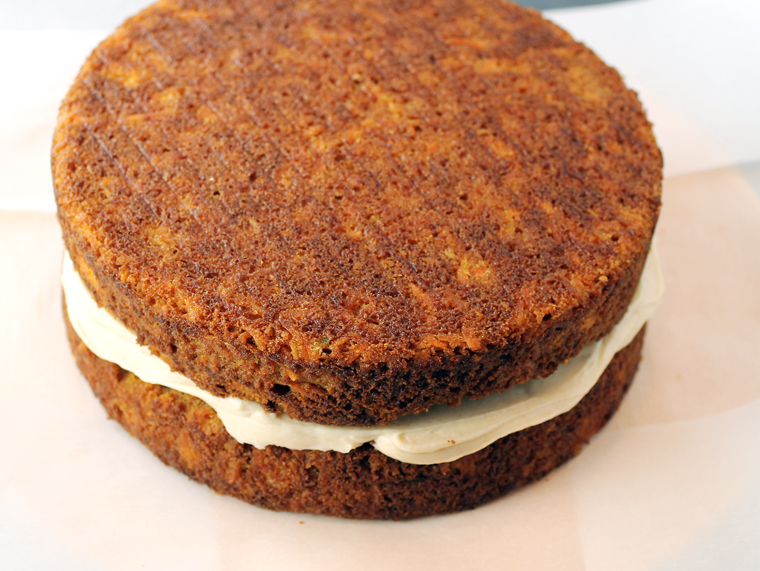 I found that after incorporating the melted white chocolate into the cream cheese, cream, and sugar that the frosting was a little on the thin side, so I refrigerated it for about half an hour to firm up more before spreading it on the cake. That’s the only thing I changed in this recipe.

This cake boasts a more refined and regal appearance than your standard carrot cake. It has the flavor of your childhood favorite, but it’s been fine-tuned into the extraordinary.

It’s moist and delicious, and feels like such a treasured treat to dig into.

In a word, it is: perfection. 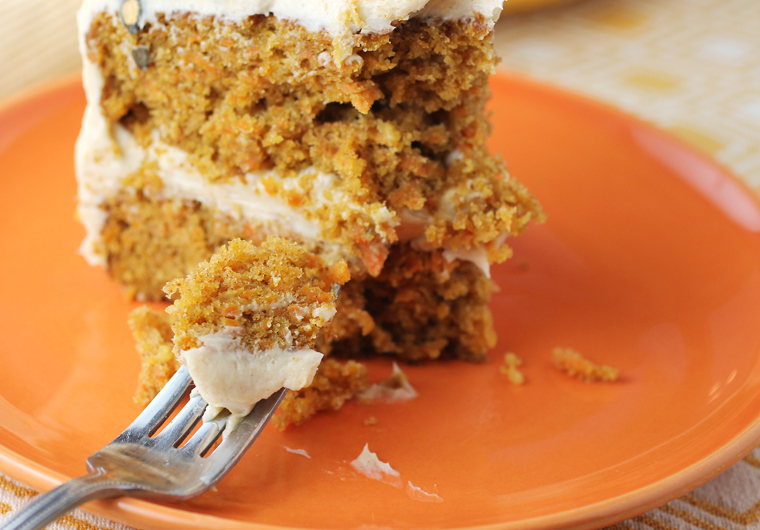 To make the cake layers: In a medium saucepan over medium heat, cook the butter until the milk solids brown and the butter is golden, about 15 minutes, stirring occasionally and watching it closely toward the end to prevent scorching. Scrape the browned butter and milk solids into a small heatproof bowl, stir in the honey, and let cool completely.

Meanwhile, set a rack in the middle of the oven and preheat the oven to 350 degrees. If your oven isn’t wide enough to accommodate two pans side by side, adjust two racks just above and below the middle.

Butter the bottoms and sides of two 8-inch round cake pans, line the bottoms with parchment rounds, and wrap dampened cake strips (or undampened silicone ones) around the pans if you have them. (Note: They help keep the sides of the pan cool, allowing the sides and top of the cake to rise at the same speed, resulting in a level top.)

In a large bowl, stir together the flour, coconut, baking powder, cinnamon, baking soda, and salt.

In the bowl of a stand mixer fitted with the whisk attachment, beat the eggs and sugar at medium-high speed until the sugar dissolves and the whisk begins to leave a trail as it mixes, about 3 minutes. With the mixer running, add the browned butter mixture in a steady stream and beat until blended. Add the flour mixture in three equal parts, beating at the lowest speed just until incorporated after each addition.

Remove the bowl from the mixer and stir in the carrots and grated ginger with a large silicon spatula.

Divide the batter evenly between prepared pans (about 26.5 ounces each) and level it with a small offset spatula.

Bake until a wooden toothpick inserted into the centers comes out clean, about 35 minutes, rotating pans top to bottom after 20 minutes if they are on different levels. Set the pans on a wire rack to cool for 30 minutes. Leave the oven on.

To make the garnish: Spread out the seeds on an unlined baking sheet in a single layer and bake until they are fragrant and the skins are golden brown, 8 to 10 minutes. Immediately transfer the toasted seeds to a plate to cool.

To unmold cakes: Pressing firmly against the pans, run a small knife around the edges to loosen the cakes, invert onto wire racks, and remove the parchments. Invert the layers a second time onto the racks and let cool completely. (The cakes will keep, wrapped airtight, at room temperature for up to 2 days or in the freezer for up to 1 month. Thaw overnight in the refrigerator before using.)

To make the frosting: In a medium heat-proof bowl set over a medium saucepan filled with 2 inches of barely simmering water, melt the chocolate, stirring occasionally with a silicone spatula.

Meanwhile, in a small saucepan over low heat, heat the cream and sugar until the sugar dissolves, stirring constantly.

Remove the bowl of melted chocolate from the pan and add the hot cream mixture, cream cheese, and cinnamon. Blend with an immersion blender (or in a food processor fitted with the metal blade) until smooth. You will have about 4 cups of frosting. Refrigerate for about 30 minutes before using to allow to thicken. (The frosting will keep, wrapped airtight, in the refrigerator for up to 2 days. Whisk chilled frosting until smooth before using.)

To assemble the cake: With a large serrated knife, trim away the thin, soft crusts from the tops of the cakes.

Dab a bit of frosting in the center of a serving plate to prevent the cake from sliding and center a cake layer over it, cut side up. Slide wide strips of parchment paper beneath the cake on all sides to protect the plate. Put 1 cup (8.5 ounces) of frosting on the cake and spread it with a large offset spatula evenly over the cake, going just past the edge. Place the second layer on top, cut side down. Put 1 cup of frosting on top and again spread it evenly over the cake, going just past the edge. Cover the sides of the cake evenly with remaining 2 cups of frosting. Carefully slide the parchment strips out from under the cake.

Arrange toasted pumpkin seeds along the top edge of the cake, pressing them gently into the frosting to secure them in place.

Cover the cake with an aluminum foil tend, poking  holes in the foil with a fork to prevent condensation, and refrigerate for at least 1 hour before serving.

Storage: This cake will keep, covered with the foil tent, in the refrigerator for up to 3 days.

For Bundt cake version: This carrot cake also can be made in a 10-cup Bundt pan. Generously butter the pan, and pour in the cake batter. Bake on a rack in the lower third of a preheated 350-degree oven for 55 to 60 minutes. Remove pan to a rack to cool for 10 minutes, then invert the cake onto the rack to cool completely. Using a cake lifter, transfer the cake to a serving plate, and serve.

Adapted From “The Artful Baker” by Cenk Sonmezsoy 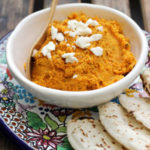 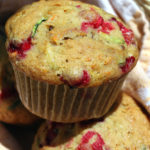 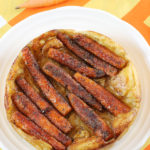 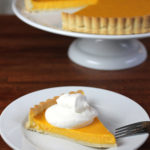 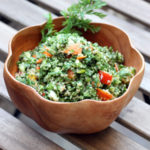 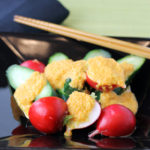 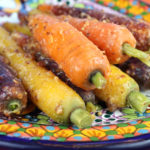 And: Maple-Mustard and Tahini Glazed Carrots 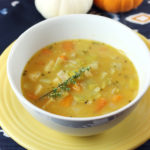