How magical and intriguing is this tart?

What could possibly create all those perfect little mounds that give this Italian dessert its distinctive look?

When James Beard Award-winning Chef Alon Shaya first laid eyes on this treat in Italy while working at a salumeria-restaurant, he thought it surely must be extremely difficult to make, a laborious affair that demanded the highest precision.

He soon learned how wrong he was.

Eddy, a matronly and motherly cook who took him under her wings, learned how to make this from her mother, who learned it from her mother before her. And she gladly taught it to Shaya.

The secret to its perfect little mounds? What lies underneath the top crust.

These Italian gluten-free cookies made with almond meal are crackly crisp with an intense nutty flavor akin to marzipan. The cookies are wrapped in colored tissue paper and sold in tins at gourmet markets or on Amazon.

“Blackberry Torta Della Nonna” is from Shaya’s new debut cookbook, “Shaya: An Odyssey of Food, My Journey Back to Israel” (Alfred A. Knopf), of which I received a review copy. He is the founder of Domenica, Pizza Domenica, and Shaya Restaurant, all in New Orleans. Shaya split from those restaurants last year, and recently opened, Saba in New Orleans and Safta in Denver.

More than a cookbook, this is a stirring memoir of how Shaya’s world was turned upside down when his family moved to the United States from Israel when he was just 5 years old. His parents, who didn’t speak English, struggled to find odd jobs, and eventually divorced. Shaya suffered in school, bullied and feeling as though he didn’t belong anywhere. Food became his solace.

The book recounts the journey, from Philadelphia to Italy to Israel, of how food and cooking came to provide not only salvation to him but purpose.

The more than 100 recipes are inspired by the people he’s known, the places he’s visited, and the important lessons he’s learned — from “Potato and Egg Boreka Tart” that’s inspired by one of his favorite snacks in a Jerusalem market; to “Linguine and Clams ‘Carbonara’,” a riff on the classic linguini and clams he learned in high school home economics; to “Za’Atar Fried Chicken,” his Israeli-style riff on the famed chicken served at Willie Mae’s Scotch House in New Orleans. I was mesmerized by this tart not only because of its unusual appearance, but because who can resist a tart that hides cookies inside? That’s double the goodness.

The dough is extremely soft, almost like drop-cookie dough. That’s why you need to roll it between sheets of parchment, then chill before transferring to the tart pan.

The recipe calls for making your own blackberry jam from fresh blackberries. It’s a simple matter, just simmering the fresh berries with sugar until the juices exude, the berries break down a bit, and the resulting syrup thickens. For an easier route, you can always use store-bought jam. You’ll need 3/4 cup, according to Shaya. It’s super simple to make your own blackberry jam for this tart.

Place one sheet of dough in the bottom of the tart pan, then spread with the blackberry jam (you’ll need pretty much all of what you made). Dip amaretti cookies in rum, then arrange them on top of the jam. Place the second dough round overtop, pinching the edges together to seal it all.

As the tart bakes, the top crust will start to mold to the amaretti cookies, producing the perfect little mounds.

The recipe instructs to bake until the crust is “firm and deeply golden.” That’s advice you want to heed or else you may end up with the dreaded “soggy bottom” in the immortal words of Mary Berry and Paul Hollywood on “The Great British Baking Show.” I had that issue after baking it for the 40 minutes called for. When I lifted off the outer ring of the pan and attempted to cut the tart, I realized only then that the bottom was under-done. So I popped it back into the oven for another 15 minutes, which crisped it enough so that it could be cut easily. So, definitely bake it longer than you think.

This is such a fun, unforgettable dessert. The crust is buttery and cookie-like. The blackberry jam gives it a sweet taste of summer. And the amaretti cookies add a burst of crunchiness, booziness and concentrated almond flavor whenever you are lucky enough to land upon one.

It truly is two treats in one. 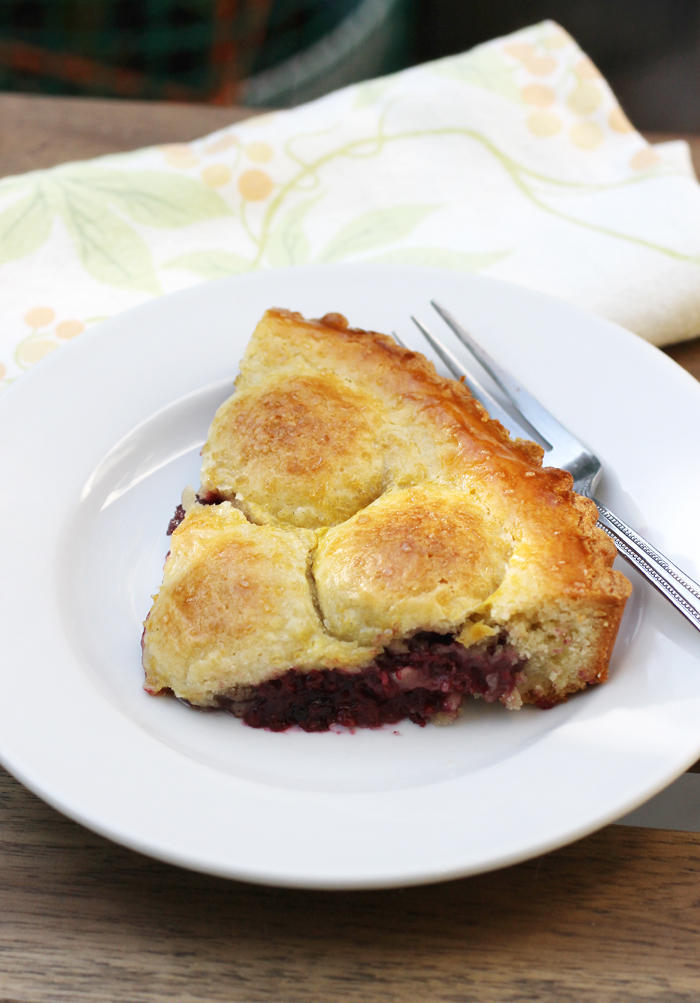 12 tablespoons (1 1/2 sticks) unsalted butter, softened, plus more for the pan

Start creaming the butter, confectioner’s sugar, lemon zest, and 1/2 teaspoon salt in your mixer on low speed, gradually bumping it up to medium and then high, until the mixture is very creamy and fluffy; pause regularly to scrape the sides of the bowl.

Add two egg yolks along with the water; continue to beat until it’s light and airy. Add the almond flour and all-purpose flours separately, then turn the mixer back to low speed and beat them in until they’re fully incorporated.

Tear four sheets of parchment paper, about 14 inches each, and lightly brush the top of each with canola oil. Set them aside.

Lightly flour a work surface, dump the dough directly onto it, and press it into a mound. Divide it in half and shape each half into a roughly 6-inch disc. Sandwich each one between two sheets of the oiled parchment (with the oiled sides touching the dough) and roll them both into 11-inch circles. Refrigerate for at least 30 minutes or overnight.

Meanwhile, for the blackberry jam, combine the blackberries with the granulated sugar and remaining 1/4 teaspoon salt in a saucepan over medium heat. As the berries start to soften and give off liquid, use a fork to mash them roughly. Once the juices come to an active simmer, reduce the heat to medium-low, and cook for another 25 to 30 minutes, stirring occasionally, until the berries are thick and jammy with just enough liquid so there are some bubbles in the pan.

Dilute the cornstarch in the lemon juice, and stir it into the berries. Cook for another minute or two to take out any starchy flavor, then remove from the heat. Once the jam has cooled, you can proceed right away or refrigerate it for a day or two.

When you’re ready to bake, heat the oven to 350 degrees with a rack in the center of the oven, and generously butter the bottom and sides of a 9-inch tart pan.

Peel one layer of parchment from one round of dough and use the other layer to lift and invert it into the bottom of your tart pan. Peel away that piece of parchment and press the dough into the bottom and up the sides of the pan. Patch any thin spots or holes with tiny scraps of excess dough.

Spread the blackberry jam evenly over the crust, all the way to the sides. One by one, dip the amaretti cookies into the rum, and arrange them concentrically over the jam, 1/4 to 1/2 inch apart, with their round tops facing up.

Peel a layer of parchment off the other piece of dough, and invert it over your pan as you did for the bottom crust. Remove the last piece of parchment, trim away any overhanging crust, and very gently push the edges together to seal. Prick the top crust a few times with a fork. Any tears can be gently smoothed over with a wet fingertip.

Make an egg wash by beating the milk with the remaining egg yolk, then brush it all over the top crust, and sprinkle the turbinado sugar evenly over it. Place the pan on a baking sheet, and bake it for 35 to 40 minutes (it may take even longer than this, depending upon your oven), rotating the pan after 20 minutes. You’re looking for the crust to be firm and deeply golden, with a fine crumb similar to shortbread. Serve this tart warm or at room temperature, on its own or with a scoop of good ice cream.

Adapted from “Shaya” by Alon Shaya 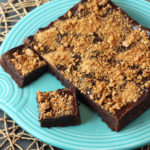