Along with veteran Chef Tom Douglas, Erickson seems to have cornered the market on establishments in Seattle. She has seven different concepts in the city that are open to the public, including an over-the-top bar, Deep Dive, located in a latticed sphere at Amazon’s downtown headquarters. She also operates cafes on the Amazon campus that are open only to its employees. A special cocktail that evening. And here it is in the glass.

I’m almost glad I had to wait for my oysters next door, as Barnacle serves some of the best cocktails I’ve ever had. It’s a slip of a bar, just 20 seats in a narrow space, and modeled after the aperitivo bars of Italy.

The drinks come with a bowl of house-made potato chips that you’re sure to devour. Thin, golden, crisped to a “t,” they are addictive.

My husband’s negroni ($9 on the Happy Hour menu) was full of deep orange rind flavor, just bitter enough, and smooth as can be. I had the special cocktail that day, a Spritz Della Casa ($12), that had the palate-awakening bitter brightness of grapefruit and an ever so lovely lift from Prosecco.

To go with that, we also enjoyed an order of Spanish sardines topped with tangy, herb-y salsa verde, and served playfully in a sardine can. Saltines came alongside, but really, the potato chips make an even better vehicle for the rich, oily, meaty cured fish.

If I lived in Seattle, I could see returning to Barnacle on a weekly basis. The cocktails are that sensational. The Walrus and the Carpenter.

After that our table was ready at The Walrus and the Carpenter. It’s another quite compact space with seats along a bar that rings the open kitchen. On the perimeter are close-set tables.

We arrived in time for the 25 percent off part of the Happy Hour, so we made good use of it. We ended up ordering two of every oyster variety offered that evening. There were eight types, which are arranged usefully on the menu from sweet to briny varieties. When you try all of that in that kind of order, you can really distinguish the differences, too, between a mild, sweet Compass Point from Samish Bay, WA and a fuller flavored, briny Sea Cow from Hammersly Inlet, WA. Go to town on the oysters here.

If you’ve ever wondered exactly what people mean by seafood that tastes “clean and fresh from the sea,” these oysters will make you understand completely.

An order of bread ($5) from Seattle’s Sea Wolf bakery brings a plate brimming with slices of crusty sourdough and earthy rye with soft, whipped butter to smear on. The bread is a great accompaniment to grilled eggplant ($12) that’s arranged prettily on an ample bed of chevre, then topped with olive tapenade. There’s plenty of the creamy goat cheese, so slather it on the bread for a real treat. The plate features three different types of eggplant that get a nice smoky flavor from the grill. However, a couple of pieces could have used more cooking, as they were still hard, unfortunately.

Even after sardines at Barnacle, we ordered more sardines ($13), grilled, and topped with a profusion of chopped walnuts, parsley, shallots and olive oil. The skin on the sardines was super crisp and the flesh so meaty. The fish may be small, but they definitely are big on flavor. The steak tartare ($16) arrives with a golden egg yolk on top to mix in for added unctuousness. The meat is tender, with a pure, clean taste.

The cool lights at the Pioneer Square locale of General Porpoise.

Rather than get dessert that night, we opted to save up our calorie allotment for the next day for a visit to Erickson’s General Porpoise. We’re talking glorious doughnuts. Yes, two will set you back nearly a ten-spot. There are several locations throughout the Seattle area, and even one in Los Angeles now. A small selection — but you can’t go wrong with any of them.

Unlike other doughnut shops that offer every type and size under the sun, General Porpoise is really all about one type of brioche doughnut that holds various fillings. About five different fillings are offered daily, and be warned that the shops do sell out.

The doughnut is a yeasty, poofy round that is soft and yielding, but possessed of a nice density so it’s not just lackluster airiness. The vanilla custard is a best-seller. It’s no wonder because it tastes like vanilla whipped cream. The chocolate marshmallow has the taste of hot cocoa with a melty marshmallow stirred into it. The Friar Plum Jam one will spoil you for any other jelly doughnut from now on. Sugar is not the first thing you taste with this jam. It’s the actual plums that are at the forefront, tasting as if summer were still here in full force. Seattle is definitely all the more delectable, thanks to Erickson’s impactful imprint. 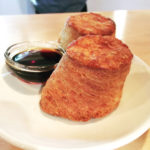 More: A Visit to JuneBaby in Seattle 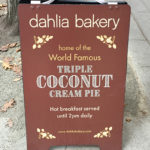 And: On the Hunt For Triple Coconut Cream Pie in Seattle 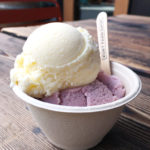