A Grilled Cheese That’s The Boom A sticky, jammy center of caramelized shiitakes and onions takes this grilled cheese to another level.

Then you know you have the makings for a simple yet sensational meal.

Especially if the cheese gets all melty and oozy all over that bread.

(Ten Speed, 2018), of which I received a review copy, will show you just how special that combination can be.

The cookbook is by Eric Greenspan, a graduate of both the University of California at Berkeley’s Haas School of Business and Le Cordon Bleu Culinary School in Paris. He also trained under such celebrated chefs as Alain Ducasse, David Bouley, and Joachim Splichal.

The Los Angeles chef made a name for himself with his grilled cheese when he opened the Foundry on Melrose in 2007. He was also the owner of The Roof on Wilshire, where a grilled cheese is indeed still on the menu morning, noon and night. With 50 takes on grilled cheese, this book offers up both simple and fully loaded versions of this iconic sandwich, from the “Monterey Melt” (poached sush-grade tuna and sharp Cheddar), and “Frenchie” (crumbled blue cheese and date marmalade), to “Prime Time” (brie with roast beef and beet-horseradish mayo), and “Redberry Crunch” (Gouda with raspberry chutney and pecan brittle).

“The Boom” is a vegetarian grilled cheese that tastes downright meaty, thanks to caramelized shiitakes and onions that get coated with home-made Worcestershire sauce. That sauce is a breeze to make, too. Not only that, unlike store-bought Worcestershire sauce that uses anchovies, this one is vegetarian, even vegan.

It’s a savory blend of cider vinegar, soy sauce, garlic, brown sugar, ginger, cinnamon, mustard powder, garlic and black pepper that gets simmered and reduced on the stovetop. For carnivores, this sauce would be dynamite on steak, pork or chicken, too. The sauteed mushrooms and onions mixed with the home-made Worcestershire sauce.

This grilled cheese uses Gouda. Be sure to slice it thinly or grate it (the best option) so that it can melt easily. The foundation is olive bread. If you’re using a nice artisan loaf — which you should — you may need to buy two loaves to get eight slices that are of ample size since those loaves tend to taper at the ends. Use the leftover bread for another use or wrap well in aluminum foil, then place in a resealable plastic bag in the freezer for later.

The sandwich is composed of two layers of Gouda enveloping a center of the sticky, jammy mushroom-onion-Worcestershire mixture.

It’s a melty mouthful heavy on meatiness without the meat.

To make the Worcestershire Sauce: Combine all of the ingredients in a small saucepan and bring to a boil over high heat. Turn down the heat to a simmer and cook for about 20 minutes, until reduced by half. Let cool.

To make the ragout: In a saute pan, melt the butter over high heat. As it browns, add the mushrooms and saute just until they begin to wilt. Add the onion and continue to cook, stirring often, for 10 to 15 minutes, until the onion is tender and caramelized. Add 1/2 cup of the Worcestershire sauce (pretty much all that you made) and continue to cook, stirring, for 5 to 7 minutes, until the vegetables are glazed and all of the liquid has evaporated. Let cool.

Line up half of the bread slices on a work surface. Top each slice with 1 cheese slice, one-fourth of the ragout, and a second slice of cheese. Close the sandwiches with the remaining bread slices.

Line a large platter with paper towels. In a skillet over high heat, melt 1 tablespoon of the butter. Turn down the heat to low, add 1 sandwich, and cook for 2 to 3 minutes on each side, until browned and crisp and the cheese is melted. (If you’re having trouble getting the cheese to melt quickly enough, put a lid on the pan for a minute.) Transfer to the prepared platter. Repeat with the remaining butter and sandwiches.

Cut the sandwiches in half, plate, and serve.

Adapted from “The Great Grilled Cheese Book” by Eric Greenspan 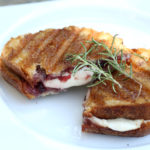 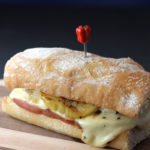