When Thomas Keller first let wind that he was going to open a Mexican restaurant in Yountville, the response was immediate: lots of eye rolling and sarcastic remarks.

But like Rick Bayless in Chicago, Keller soon proved this gringo knew exactly what he was doing. Keller may not have made exhaustive trips to Mexico to immerse himself in the intricacies of the cuisine. But he did the next best thing; he hired a chef de cuisine with impeccable credentials and know-how, Kaelin Ulrich Trilling, who was raised in Oaxaca by his mother, Susana Trilling, the noted culinary teacher who owns the cooking school, Seasons of My Heart in Mexico.

As a result, Keller’s La Calenda, which opened in January, is a triumph.

I finally had a chance to check it out a month ago, when I dined at lunch, paying my own tab at the end. Housed in the former Hurley’s.

The former Hurley’s has been transformed into an airy, colorful space reminiscent of a Mexican hacienda.

Now that the restaurant has been open awhile, the lines have died down a bit, thankfully. Even on a weekday, we were glad we arrived for an early lunch before the dining room filled up quickly. The kitchen. Note the vertical rotisserie in back with the pork and pineapple cooking on it.

Although I had read some early reviews bashing the tortilla chips, I decided to give them a shot. I think the restaurant must have heeded the criticisms and changed their chips because the ones I had were faultless — crisp, fresh, thin yet substantial enough to dunk liberally in chunky guacamole ($13). Two salsas accompanied it — a fruity red salsa mixe with a lick of heat; and a salsa verde that was much spicier and had a lovely smokiness. After seeing the vertical spit in the back of the kitchen that held slow roasted pork along with an entire pineapple, we could not resist getting the Tacos Al Pastor ($11). The tacos come two to an order on stone-ground blue corn tortillas. The pork did not disappoint, not with its incredible juiciness and chunks of pineapple that were at once sweet, tangy, and caramelized. I’d heard raves about the Puerco en Mole Verde ($22), so it was a must-try. The pork jowl is hidden underneath saucy mole verde and big whole chard leaves. The meat is as tender as it gets, nearly spoonable. If you love pork, you will go crazy for this. It was served with a stack of those same rustic tortillas so redolent of corn. Hand-made tortillas to sop up all that sauce.

Pollo en Mole Negro ($22) is a tender, half chicken blanketed in deep, dark wonderful mole negro that was deeply earthy, smoky, peppery and cocoa-y. This is a sauce with so much depth that you discover something new in it every time you dip a torn tortilla in it to enjoy. The most amazing refried beans.

The side of arroz blanco ($5), white rice, was fluffy with each grain distinct. It was fine for enjoying with all the mole sauce. But what really was truly special was the side of Frijoles Refritos ($5). I don’t usually get that excited about refried beans at a Mexican restaurant. But these were astounding — so creamy and velvety in texture, rich in earthy flavor, and incredibly satisfying in every way. My husband and I were nearly fighting over the last spoonfuls.

I’d go back to La Calenda just for those beans again. And when I do, I will definitely save room to try much more of this exciting food done right. 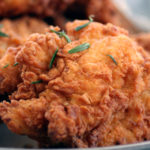 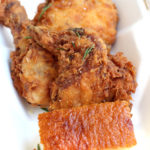 And: A Visit to Ad Hoc Addendum 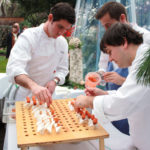 And: A Look Back at The French Laundry Holiday Party