Dandelion Chocolate’s Bloom Is A Beaut 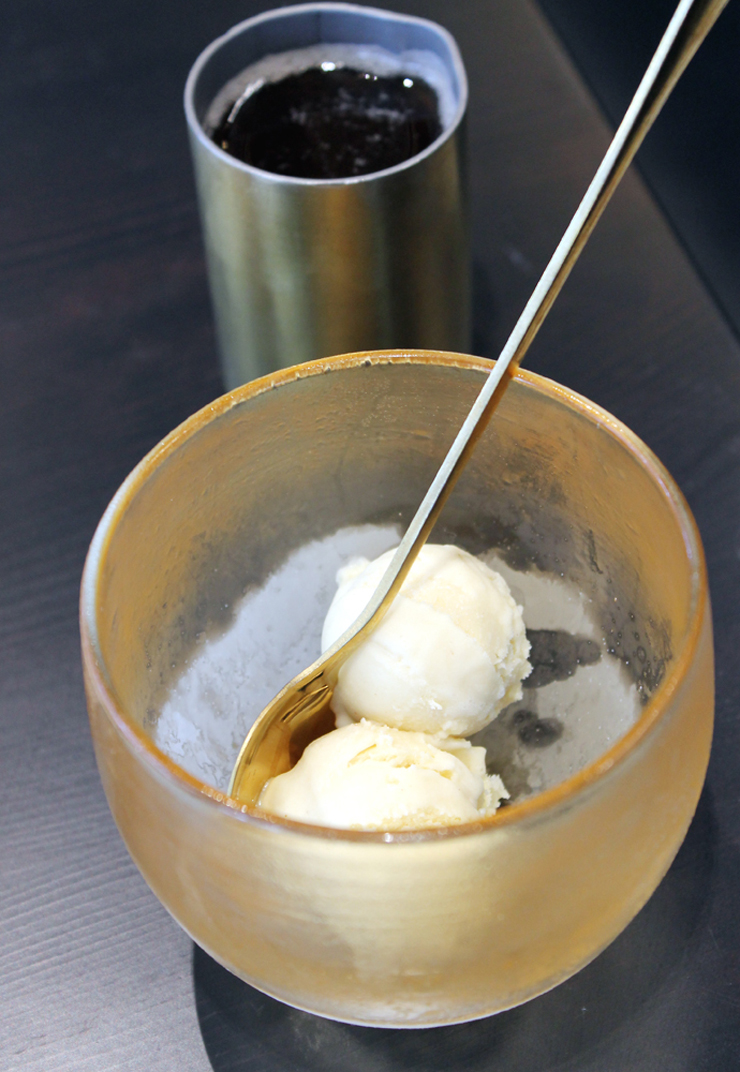 The makings of an artisan root beer float at Bloom cafe inside Dandelion Chocolate factory in San Francisco.

There are ladies who lunch.

And then there are ladies who chocolate.

Count me in the latter category. And from the looks of a recent weekday afternoon at Bloom Chocolate Salon, I am hardly alone. Customers filing in for coffee and pastries.

Enter the brick building, as I did recently when I was invited in as a guest of the cafe, and on your right is a store with shelves loaded with pottery, books, and Dandelion chocolate bars (with sample cups holding broken bar bits to try).

To the left is the coffee counter and bakery case, packed with elegant pastries and cookies, including a chocolate kouign-amann that’s a little denser and less sweet than the B. Patisserie one yet still quite delectable. 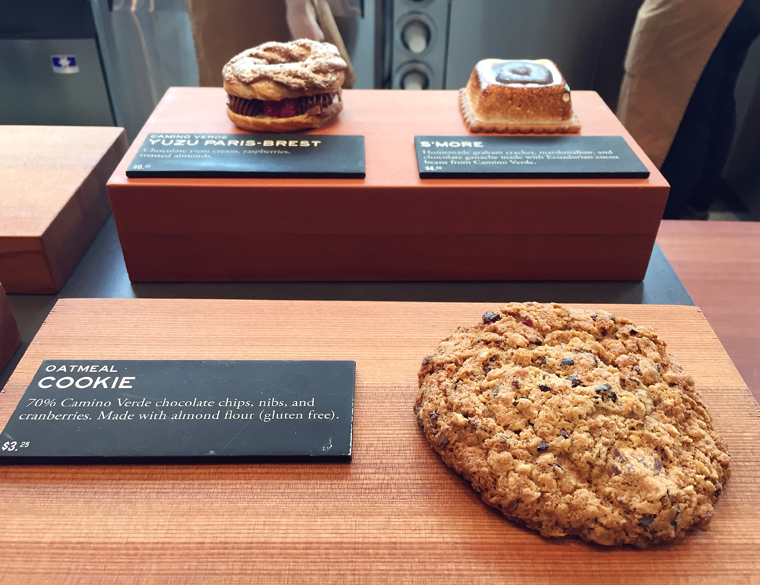 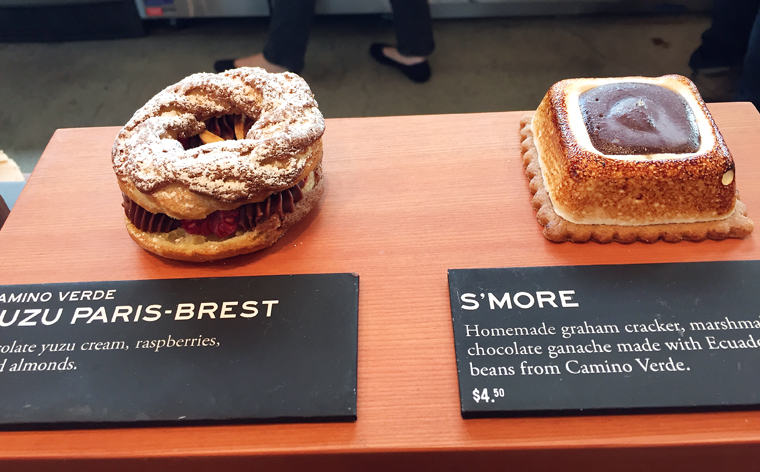 Who can pick just one? They are the creation of Executive Pastry Chef Lisa Vega, formerly of Restaurant Gary Danko in San Francisco.

The factory offers guided chocolate tours and classes. But I was there with friend to check out Bloom, which is open for breakfast and afternoon tea (or hot chocolate).

When you visit, just allow plenty of time if you’re driving, because parking in this area can be quite challenging during a weekday afternoon. But once you are seated inside Bloom, a glass-enclosed, light-filled dining area, you immediately decompress. With a black and white tiled floor, and lots of shiny brass accents, you do feel as if you’re taking a relaxing break in a cafe in Paris or Vienna.

On this afternoon, shortly after lunch-time, there were ladies dining in twosomes, and a couple of moms with their young daughters in tow. See what I mean about it being a place for ladies who chocolate? Horchata (front) and iced mocha (back).

In the afternoons, it’s like experiencing high-tea but in a far more decadent way. Chocolate is front and center in most everything. And it doesn’t come cheap, of course. A la carte beverages can be had. But really, the reason everyone is sitting down at this hour here is for one of two services offered: the Afternoon Chocolate Tea ($45) or the Afternoon Ice Cream ($40).

Each is like a mini tasting menu at an upscale restaurant, done up to the nines on fine ceramics. You also get a choice of a pot of tea or chocolate included. Since there were two of us, we ordered one chocolate tea service and one ice cream service. And because it was a warm day, we opted for cold beverages instead: an iced mocha for her, made with Dandelion’s classic hot chocolate with a shot of espresso; and a Nibby Horchata for me, made with almonds, hazelnuts, cocoa nibs and rice. This is an incredibly rich version of horchata with a deep nutty taste. Some reviewers online have complained about the drink’s slightly gritty texture from the ground nuts. I didn’t find it off-putting at all. To me, every sip was a true treat. 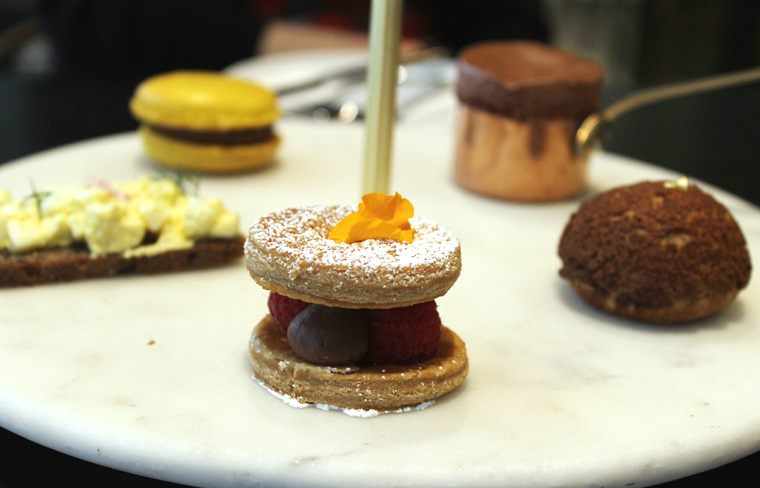 The Afternoon Chocolate tea service with almond-raspberry napoleon in front. 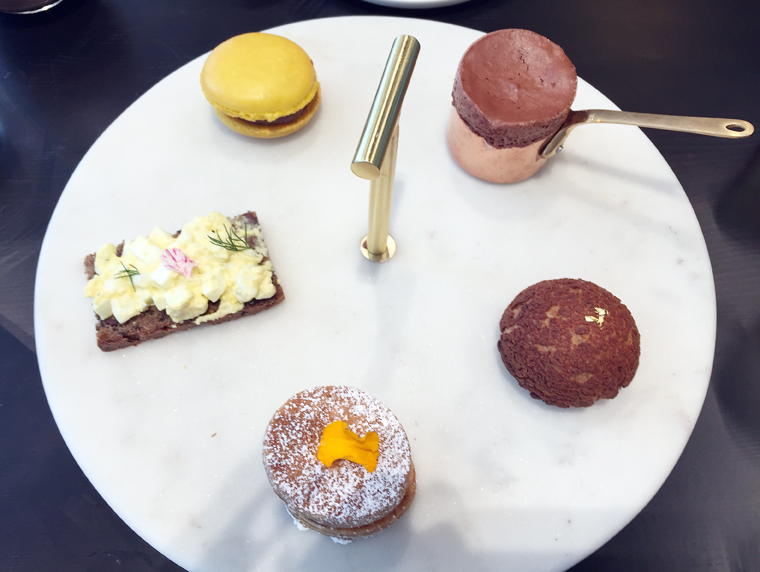 The Afternoon Chocolate Tea arrives on a large round marble serving platter, with each offering about two-bites or so. There’s a citrus macaron, chewy and nutty with an almond meringue sandwich cookie filled with Dandelion chocolate cremeaux, cacao pulp, and a touch of Meyer lemon, and mint jam. The chocolate souffle comes in an adorable doll-size copper pot. It has a crackly-papery brownie-like top, and a creamy, melt-in-your-mouth fluffy center. The taste is thoroughly intense.

The Earl Grey profiterole is filled with lush chocolate Earl Grey cream with the tea taste coming through at the end. The almond raspberry napoleon is so buttery crisp and flaky, with a center of chocolate almond cream and fresh raspberries arranged just so.

If your taste buds are craving something savory at this point, there’s a small open-face egg salad tea sandwich. The house-made bread is a sourdough rye imbued with cocoa nibs that give it a distinct roasty flavor with just an edge of bitterness. Classic egg salad is layered on top with capers and dill. 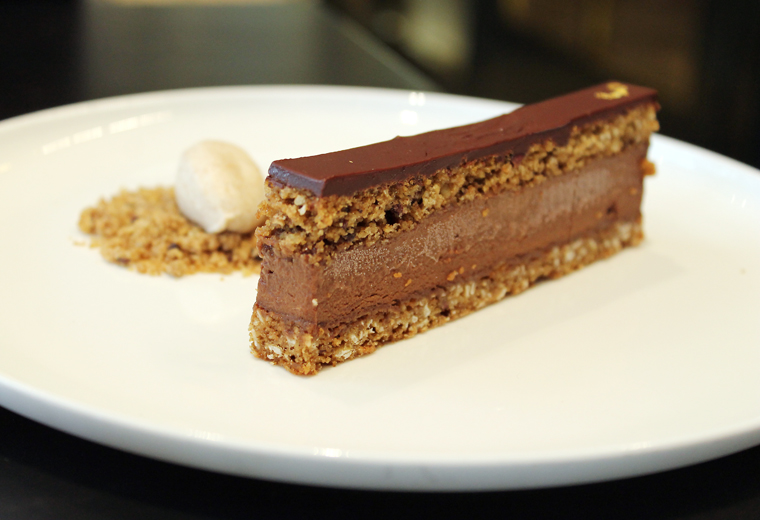 The It’s It reinterpreted. 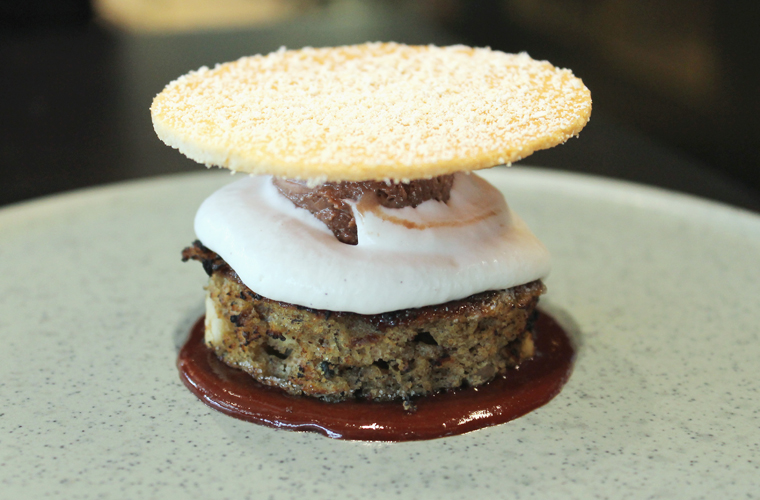 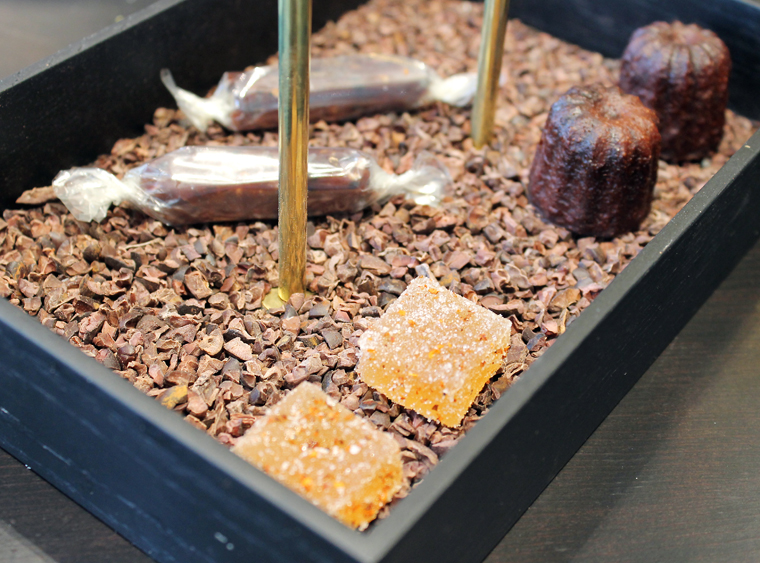 The ice cream service starts with the nibby float. Two small scoops of cocoa nib ice cream arrive in a pretty glass bowl. It comes with a little pitcher of house-made root beer so you can pour on as much as you want over the ice cream. The root beer has a deeper flavor than most commercial ones, so that you really taste the sassafras with its earthy, anise notes.

The “It’s It” is totally unlike the iconic old-fashioned San Francisco ice-cream sandwich. Instead this one is an opulent bullion-bar. The top and bottom oatmeal cookie layers caress a layer of Ecuador chocolate ice cream. It’s finished on top with a sleek layer of ganache and a flutter of gold leaf just for the heck of it.

The Madagascar banana split is again not what you expect. Instead, it’s a finessed affair of a round of caramelized banana bread sitting in a pool of thick chocolate-cherry ganache sauce. The light, fluffy banana bread is crowned with Madagascar chocolate ice cream and a crisp peanut brittle round.

At the end, a tray of mignardises arrive: burnished chocolate canales, sesame seed caramels, and surprising pates de fruit that taste like they’re made with load of tangy citrus, but they’re not. Instead, they get their tartness and slight floral, lychee-like flavor naturally from cacao pulp. How magical is that?

One of the factory machines to make chocolate. 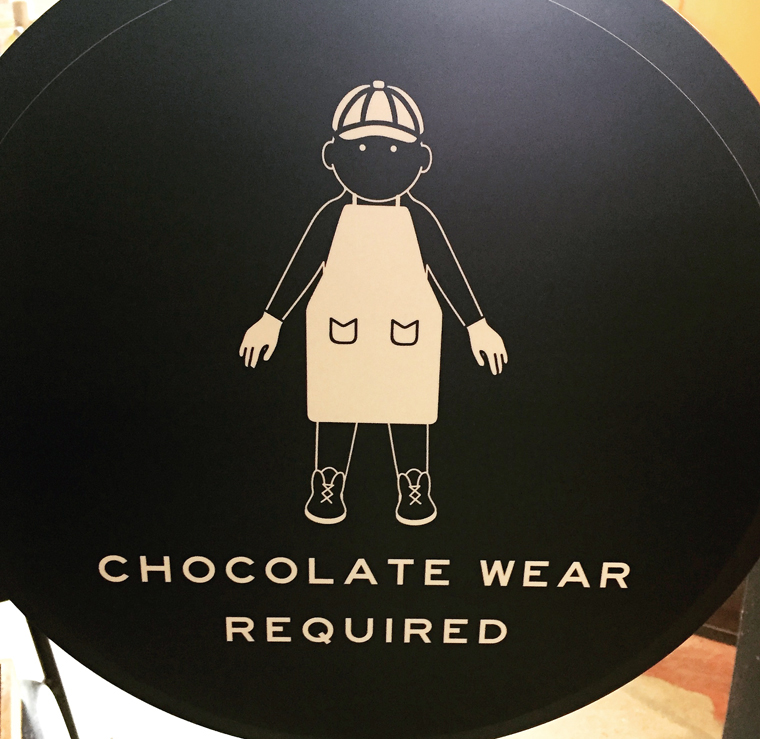 My kind of fashion sense.

It all makes for a posh, pampering experience. Paying $40 to $45 to partake of an all-chocolate meal is probably not something you can — or want to — do all the time. But any chocolate aficionado would be remiss not to enjoy it at least once. More: A Visit to the See’s Candy Factory